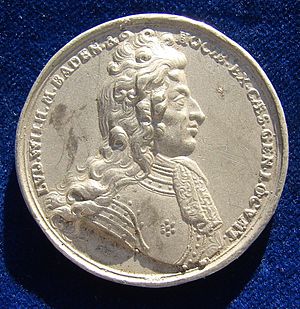 The portrait of Turk Louis 1691, on a Medallion by Georg Hautsch celebrating the German-Serbian victory against the Ottoman Empire at Slankamen, obverse. 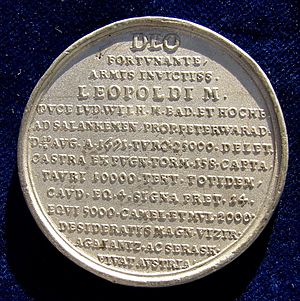 The Ottomans had suffered partial military collapse against the Austrians in the 1680s, most notably at the Battle of Vienna in 1683, and the loss of Belgrade to Maximilian II of Bavaria in 1688 and Bosnia in 1689. However, with the beginning of the Nine Years War in the west, the early 1690s were to see an end to Habsburg conquests in the Balkans and a partial Ottoman recovery.[2] Many German troops were withdrawn from the east to fight King Louis' French forces on the Rhine, encouraging the Ottomans, led by the Grand Vizier Köprülü Fazıl Mustafa Pasha, to continue the war. The Ottomans managed to retake Belgrade and most of present-day Serbia.

In August 1691, Louis William, Margrave of Baden-Baden had been able to gather an army of 50,000 and marched south to provoke the Ottomans into another major battle, similar to the Battle of Mohács (1687), after which all the lost territory could be retaken.

The clash between the two forces took place on the west side of the Danube, opposite the outlet of the Tisa. Both armies deployed near Zemun, but the superior Ottoman army at first didn't attack for two days. Then Baden-Baden tried to provoke the attack, by withdrawing slowly to a fortified position near Slankamen. The Ottomans followed and surrounded the Austrian army. By August 19, the heat, disease and desertion had reduced both armies to 33,000 and 50,000 able men. On that day the Ottoman cavalry finally attacked.

But these were unorganized charges; despite huge but poorly armed forces the Ottomans were no match for the firepower of Louis of Baden's German and Austrian infantry and field guns. Additionally, the Ottoman's supply system was incapable of waging a long war on the empty expanses of the Pannonian plain.[2] Initially, the Ottomans were at an advantage, as they advanced and burnt 800 supply wagons of the Austrians. Louis of Baden, in a desperate situation, broke out of his position, besieged by the Ottomans, and turned their flanks with his cavalry, inflicting fearful carnage.[3] After a hard battle, the 20,000-man Austrian army with 10,000 Serbian Militia led by Jovan Monasterlija was victorious over the larger Ottoman force. The death of the Grand Vizier Köprülü Fazıl Mustafa Pasha during mid-battle caused the Ottoman morale to drop and the army to disperse and retreat.

A 16-metre-tall obelisk (52 ft) was built in Slankamen to commemorate the Austrian victory.