The Battle of Suiyang (睢陽之戰) was a battle in Suiyang during the An Shi Rebellion, between the rebel An Lushan's Yan army and the loyalist forces of the Chinese Tang army. Although the battle was ultimately won by Yan, it suffered a major loss of manpower and time. The battle was noted for Tang army's determination to fight to the last man, and also due to the cannibalism that occurred during the siege.

In January 757AD, An Lushan was killed by his own son An Qingxu (安慶緒). In the same month, An Qingxu ordered general Yin Ziqi (尹子奇) to besiege Suiyang. Yin Ziqi joined with Yang Chaozong before the siege, with a total army size over 130,000 men. The governor of Suiyang at the time, Xu Yuan (許遠), heard of Zhang Xun's fortress defence abilities in the Battle of Yongqiu and asked him for help. Zhang Xun knew that if Suiyang fell, the rest of Tang's territory south of the Yangtze River would be threatened. He agreed to help immediately.

The united army of Zhang Xun and Xu Yuan, around 7,000 men, prepared to defend Suiyang with their lives. Xu Yuan focused on supplies management and after-battle repairs. Zhang Xun, on the other hand, focused on battle tactics.

Despite daily sieges by the Yan army, the Tang soldiers never let up. Zhang Xun's troops played the war-drums during the night, acting as if they were going to fight (a tactic that army apparently had used before). Consequently, the Yan army were forced to stand on guard during the night, and suffered from the lack of sleep. Eventually, some troops did not bother to put on their armor when they heard these battle drums, and kept sleeping. After the Yan army lowered their defenses, Zhang Xun's forces ambushed them very successfully.

Zhang Xun had long wanted to give the Yan morale a major blow, and the best way to do this would be to hurt or kill the Yan general Yin Ziqi. However, in an age before photography, the problem was that Zhang had no idea what Yin Ziqi looked like, not to mention he would be in a mix of soldiers. Zhang therefore turned to psychology. He ordered his troops to shoot weeds, instead of arrows, at a few enemy soldiers. When these soldiers noticed that they were being shot by weeds, hence were not killed, they were overjoyed. They promptly ran to Yin Ziqi to report that the Tang army had already run out of arrows. Zhang Xun noticed where the soldiers ran and ordered his best archers to shoot at Yin Ziqi. One such arrow hit Yin Ziqi in his left eye, throwing the Yan army instantly into chaos. The siege ended with the expected major blow to the Yan morale.

After 16 days of siege and ambush, Yan had already lost 20,000 men. Yin Ziqi decided that his army was too tired to fight, so he ordered a temporary retreat to regroup. Yin Ziqi returned to besiege Suiyang two months later, with an additional 20,000 fresh troops. 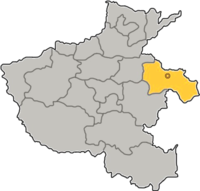 Location of Shangqiu, where Suiyang was

Originally, Xu Yuan had prepared for the upcoming battle by storing 1 year of food supply inside of Suiyang. But the district governor had insisted that he share the large food supply with other nearby fortresses, and hence the food supply became much less than what Xu Yuan originally planned. By July, the Tang soldiers had fallen into a serious food shortage. Tang soldiers were given very small daily rations of rice. If they wanted more food, they would need to settle for whatever animals, insects, and tree roots that could be found in their vicinity.

Yin Ziqi noticed the famine that was plaguing the Tang army; he therefore ordered more troops to surround Suiyang. He made many siege attempts with siege ladders, but they were all repelled by the determined Tang troops. Yin Ziqi even used hooked pulled carts, to try to pull down the towers of the fortress, with limited success. The Tang soldiers were able to destroy the hook of these carts, before major damage was made. But even with the battle success, Zhang Xun knew that with only around 1,600 soldiers left, and most of them sick or hungry, the battle would soon be a lost cause.

By August, all of the insects, animals and vegetation in the besieged area had been eaten. Zhang Xun ordered 30 of his best soldiers, including his best soldier captain Nan Jiyun (南霽雲), to break through and ask for help from nearby fortresses. Nan Jiyun and 26 others successfully broke through. However, none of the nearby local governors were willing to offer troops and food supplies. Finally, Nan Jiyun asked for help from Helan Jinming (賀蘭進明), governor of the nearby Linhuai (臨淮). Helan had long been jealous of Zhang Xun's abilities. He also wanted to preserve his forces, so he refused to assist Zhang Xun. Instead, he offered Nan Jiyun a large feast, to try to convince him to join his ranks. Nan replied, "The reason why I risked my life to come here is because the local civilians and my comrades have no food to eat for over a month. How can I eat such a huge feast when I know that my comrades are facing? Although I failed my mission, I will leave a finger with you, as evidence that I did come here." Immediately after, Nan Jiyun cut off (or, in some versions, bit off) one of his own fingers. He then rode away.

Nan Jiyun's bravery finally convinced a local governor Lian Huan (廉垣) to lend 3,000 soldiers to him. Both of them fought their way through the Yan ranks back into Suiyang. Fighting through the numerous Yan army was damaging, and only about 1,000 of the soldiers from the outside made it inside the fortress.

The starving Tang soldiers, numbering about 1,600 in total and with no chance of outside help, fell into despair. Almost everyone tried to convince Zhang Xun to surrender, or find some way of escape south. Zhang Xun and Xu Yuan discussed this, and Xu Yuan concluded, "If Suiyang falls, Yan will be free to conquer the rest of southern China. And on top of it, most of our soldiers are too tired and hungry to run. The only choice we have left is to defend for as long as possible, and hope that a nearby governor will come and help us." Zhang Xun agreed with him. Zhang Xun announced to his remaining troops, "The nearby governors might be inelegant, but we cannot be disloyal. Another day that we can hold out is another day for the rest of the Tang to prepare defenses. We will fight till the very end."

At this time, besieged Suiyang had long been in a state of famine. The Old Book of Tang says:

(Yin Ziqi had besieged the city for a long time. The food in the city had run out. The dwellers traded their children to eat and cooked bodies of the dead. Fears were spread and worse situations were expected. At this time, Zhang Xun took his concubine out and killed her in front of his soldiers in order to feed them. He said, "You have been working hard at protecting this city for the country wholeheartedly. Your loyalty is uncompromised despite the long-lasting hunger. Since I can't cut out my own flesh to feed you, how can I keep this woman and just ignore the dangerous situation?" All the soldiers cried, and they did not want to eat. Zhang Xun ordered them to eat the flesh. Afterwards, they caught the women in the city. After the women were run out, they turned to old and young males. 20,000 to 30,000 people were eaten. People always remained loyal.)

Xu Yuan also killed his servants, which was recorded in The New Book of Tang:

An explanation for people still staying loyal is accounted in The New Book of Tang:

(After the city was besieged for a long time, at the beginning, the horses were eaten. After horses ran out, they turned to the women, the old, and the young. 30,000 people in total were eaten. People knew their death was close, and nobody rebelled. When the city fell, only 400 people were left.)

It is possible that all dead soldiers and civilians were also eaten after this incident.

The Tang soldiers fought bravely until early October. Finally, with fewer than 400 men alive, and the men without the strength to shoot arrows, Suiyang fell to the Yan army. Zhang Xun said before the fall, "We are out of strength, and can no longer defend the fortress. Although we have failed the emperor in life, we hope to keep killing enemies after death."

Zhang Xun, Nan Jiyun and Xu Yuan were all captured. Yin Ziqi asked,"I heard that every time you fight, you open your eyelids until they rip, and you bite your teeth until they crack. Why do you do that?" Zhang Xun answered, "I want to eat you traitors alive. The damages to my eyes and teeth are nothing." Yin Ziqi used a dagger to hold open Zhang Xun's mouth, and to his surprise, all but three of Zhang Xun's teeth were indeed cracked. Zhang Xun finally said, "I die for my emperor, so I will die in peace."

Yin Ziqi admired Zhang Xun's bravery and commanding abilities. But no matter how hard Yin tried to persuade Zhang Xun, Nan Jiyun, and Xu Yuan, they would not join the Yan ranks. At the end, fearing further dangers, Yin killed all 3 men, along with 33 other loyal elite soldiers.

Zhang Xun was able to repel many overwhelming Yan sieges, with less than 10,000 soldiers during each battle. Because of Zhang Xun's determination, the resource-laden southern China was not under threat from the rebels for almost 2 years. With such a large Yan army held at bay, Tang was able to use the resources to gather more troops for combat. This gave Tang enough time to regroup and strike back at Yan.

To Yan, the losses were enormous, although Yan won this series of battles. Before the Battles of Yongqiu and Suiyang, Yan had intended to conquer all of the Tang Dynasty. Their total army size, across the whole country, was well over 300,000 men, greatly outnumbering what the Tang army could have offered at the time. After these two battles, however, the tide had turned and the Tang army held the upper hand in both manpower and equipment. If Yan had conquered the whole Suiyang district even one year earlier, the Tang Dynasty might have ended by 757AD. The Suiyang campaign marked the turning point of the war.