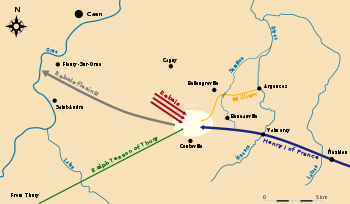 Map of the battle of Val-ès-Dunes

The Battle of Val-ès-Dunes was fought in 1047 by the combined forces of William, Duke of Normandy and King Henry I of France against the forces of several rebel Norman barons, led by Guy of Brionne,[1] the son of Reginald I, Count of Burgundy.

As a result of winning the battle, William (later William the Conqueror) was able to retain his title and maintain control over the western half of his duchy.

William had succeeded to his title in 1035, as the seven-year-old illegitimate son of the previous Duke, Robert I. Several of William's kinsmen (including Guy of Burgundy, his cousin) believed themselves to have a better claim to the title, but William had the support of King Henry I and other influential nobles.

In 1046, some of William's enemies decided to finally strike. After an ambush near Valognes on the Cotentin Peninsula failed, the rebel nobles—Gui of Burgundy, Nigel of the Cotentin, Rannulf of the Bessin, Ralph Tesson of Thury, Grimoald of Plessis, and Haimo of Creully—raised an army of about 25,000 men.

After escaping the ambush, William rode directly to King Henry's court in Poissy, and reminded the king that a revolt against his faithful vassal was a revolt against himself. Wanting to protect his vassal and ally, King Henry raised an army of about 10,000 men to march on Normandy.

In the summer of 1047, King Henry's army joined Duke William's much smaller Norman army near Caen, in the heart of rebel territory. During the first part of the battle, Ralph Tesson realised on which side allegiance truly lay, and he and his men then changed sides and joined the royal army,[2] attacking the rebels from the rear. The next day, the armies fought on the plain of Val-ès-Dunes, near the present-day town of Conteville.

The battle consisted mainly of a series of cavalry skirmishes. The rebel army outnumbered the royal army, but it lacked the latter's coordination and leadership. Haimo of Creully unhorsed King Henry, but was killed before he could injure him.[2] After losing several skirmishes, the rebel army broke apart, panicked, and fled to the west. The royal army pursued closely, slaughtering rebels by the thousands and driving the remnants of their army into the Orne River, near the Athis fort and Fleury-sur-Orne. An observer recorded that the bodies of the rebel knights who tried to cross the Orne were so numerous that bloated bodies blocked the mill of Barbillon as the river carried them downstream en masse.

While the royal army drove much of the rebel army to the west, Gui of Burgundy and his surviving forces escaped to his lands in the east and holed up in the strategic castle of Brionne. Despite an energetic siege, William was not able to force the castle into surrender until 1050, and, during that time, he was not able to assert his authority in the eastern third of his duchy, which lay beyond Brionne.

After the Battle of Val-ès-Dunes, there was still strong opposition to William among the Norman nobles, but they were forced to declare a "Truce of God" at Caen in October 1047.[3] This truce, backed by the full endorsement of the Church, stated that private wars or vendettas were prohibited from Wednesday evening to Monday morning. The truce gave William special rights to defend his title and the public order; he did not, along with King Henry I, have to abide by the order. Even though William's position was still weak, with Gui of Burgundy still holding out and William having to pardon many of the barons who had opposed him, it would be five years before he had to face another major revolt.