From Infogalactic: the planetary knowledge core
(Redirected from Battle of Valparaiso)
Jump to: navigation, search 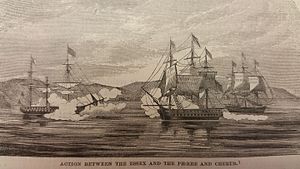 The Battle of Valparaíso, also called the Capture of USS Essex, was a naval action fought during the War of 1812. It took place off Valparaíso, Chile on March 28, 1814, between the frigate USS Essex and the sloop USS Essex Junior of the United States Navy and the frigate HMS Phoebe and sloop HMS Cherub of the Royal Navy. The British ships won the battle, and the American vessels were captured.

On March 28, 1814, Essex and Essex Junior, commanded by Captain David Porter, were brought to battle north of the Pacific port of Valparaíso, Chile. Essex had been raiding the English whaling fleets for a year during the War of 1812. The British admiralty dispatched two ships, Phoebe of 36 guns and Cherub of 18 guns under Captain James Hillyar, to go find and capture the American raiders. Essex was cornered in Valparaíso, and in the first meeting between the two ships, Phoebe came exceedingly close to Essex, as if to start a battle and violate Chilean neutrality. Captain Porter threatened to board Phoebe if it touched one rope of the Essex.

Essex tried to escape on March 28, and when extremely close to success, she lost a topmast, impairing maneuverability. A few hours later, Hillyar with Phoebe and Cherub brought Essex and Essex Junior to battle. For hours, Essex, armed with carronades, cannons with short range, was pounded by the long cannons of Phoebe and Cherub, until the ship was an unmanageable wreck and surrendered. Out of a crew of 154 Essex suffered 58 dead, 45 wounded and 31 missing[3] Phoebe had 4 killed and 7 wounded. Cherub had 1 killed and 3 wounded. David Glasgow Farragut, a future United States Navy admiral, was on board Essex as a midshipman during this battle.

Essex was later repaired and commissioned into service in the Royal Navy as HMS Essex. She served for over twenty years before being de-commissioned and sold off in 1837. Herman Melville criticized Porter's refusal to strike his colors when it became clear the situation was hopeless, instead seeking to "crown himself with the glory of the shambles, by permitting his hopeless crew to be butchered before his eyes." "Nor, by thus continuing to fight, did this American frigate, one iota, promote the true interests of her country."[4]

There is a memorial for the American dead in the Dissidents Cemetery in Valparaiso.