The Battle of Valtetsi was fought on May 12 (O.S.), 1821 in Valtetsi between the Ottoman army and Greek revolutionaries.

The Greek War of Independence officially broke out on March 25, 1821. The city of Tripoli in Arcadia, central Peloponnesus, became a prime objective of the Greek revolutionary army.

Only the warlike Maniots were experts in the art of battle. Besides them, klephtes who lived in mountains, as well as the armatoloi, who had for centuries been hired by the local Ottoman authorities initially to guard the mountain passes and later for the general keeping of law and order were able to make a coherent force.[3]

During April 1821, the initially small Greek forces in the area were slowly augmented by men from the nearby villages who declared Kolokotronis as Archistratigos, the man for overall command. 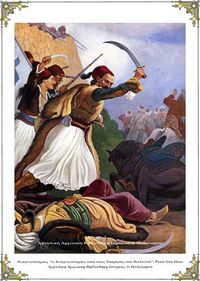 Immediately, he established armed camps near the villages of Levidi, Piana, Chrysovitsi, Vervena and Valtetsi who were former rebel's dens that now became headquarters for the preparation of the siege of the Ottoman stronghold, taking advantage of the absence of Hursid Pasha (governor of Morea) who was leading an expedition against the apostate Ali Pasha of Janina under the Sublime Porte's special command.[4]

On April 24 (O.S.), 1821, the Ottoman forces of Tripolitsa attacked and put to flight the Greeks based in Valtetsi. The Muslims were then reinforced on May 1 (OS) by 4,000 Albanian under Mustafa, the Kehayabey of Hursid Pacha, coming from Argolis.[5][6]

A couple of weeks later, a combined Turkish and Albanian force of 5,000 men, under the command of Mustafa, was departed to destroy the Greek positions at Valtetsi on May 24, 1821.[2] Its main section, under Rubi bey, was sent directly to assault the Greek camp now defended by 2,300 revolutionaries.[7]

The defensive strategy was to fortify 4 tower houses in the area following the pyrgospitia Maniot pattern: Kyriakoulis Mavromichalis as field-commander defended the first tower with 120 men. Ilias Mavromichalis was in charge of the second one with 250 men. Ioannis Mavromichalis with 350 men commanded the third tower and the old septuagenary Mitropetrovas with 80 men stayed in the last one.

Rubi bey ordered to storm the place, while a small force was to move behind the village itself to cut off the Greeks' expected retreat to the mountain paths. He demanded the rebels to surrender their weapons but, when refused, began his full assault. The Turkish and Albanian forces managed to capture some positions including the water supply but a fierce resistance obliged them to demand for Kehayabey's reinforcements.

In the mean time, more Greeks, numbering 700 men, under Theodoros Kolokotronis, arrived and attacked the Ottomans on their flanks weakening their operational power. Once again, another contingent under Dimitrios Plapoutas, made a significant entrance in the battle so as to give vital support to the exhausted rebels, balancing the actions.[7]

Against Ottoman expectations, Greeks maintained their positions as the Ottoman cavalry became useless when trying to attack on rocky slopes. All Turkish and Albanian attacks were repelled and finally Rubi bey ordered retreat which turned into a route after the Greeks abandoned their defensive attitude under the fortified positions and violently counterattacked, completely breaking the enemy lines.

According to an old Maniot folk tradition, when watching the Turkalbanians in retreat Captain Kyriakoulis is said to have shouted:

The Greeks achieved a decisive victory and captured two cannons[8] and ammunition.

The battle itself lasted for nearly 24 hours. The casualties were also unexpectedly heavy for the Ottoman army: 600 dead compared to the 150 dead rebels.[9]

The Battle of Valtetsi was the first decisive Greek victory in their struggle for freedom. Its effects were as follows:

Kolokotronis, according to his memoirs, said to his compatriots: We must render up thanksgivings for this day, which should be kept holy for ever, as the day upon which our Motherland achieved her freedom.[11]