The Battle of Watling Street took place in Roman-occupied Britain in AD 60 or 61 between an alliance of indigenous British peoples led by Boudica and a Roman army led by Gaius Suetonius Paulinus. Although heavily outnumbered, the Romans decisively defeated the allied tribes, inflicting heavy losses on them. The battle marked the end of resistance to Roman rule in Britain in the southern half of the island, a period that lasted until 410 AD.[2]

Historians are dependent on Roman sources for accounts of the battle.[3] The precise location is not known, but most historians place it between Londinium and Viroconium (Wroxeter in Shropshire), on the Roman Road now known as Watling Street. This name for the road originated in Anglo-Saxon times, thus the modern name of the battle is anachronistic as well as being somewhat speculative.

In AD 43, Rome invaded south-eastern Britain.[4] The conquest was gradual. While some kingdoms were defeated militarily and occupied, others remained nominally independent as allies of the Roman empire.[5]

One such people was the Iceni in what is now Norfolk. Their king, Prasutagus, secured his independence by leaving his lands jointly to his daughters and to the Roman emperor, Nero, in his will. But when he died, in 61 or shortly before, his will was ignored. The Romans seized his lands and violently humiliated his family: his widow, Boudica, was flogged and their daughters raped.[6] Roman financiers called in their loans, which must have placed an increased burden of taxation on the Iceni.[7]

When the Roman Governor of Britain, Gaius Suetonius Paulinus, was campaigning on the island of Mona (Anglesey, north Wales), the Iceni, led by Boudica, revolted.[8]

The Iceni allied with their neighbours the Trinovantes, whose former capital, Camulodunum (Colchester), was now a colony for Roman veterans. To add insult to injury, the Romans had erected a temple to the former emperor Claudius in the city, built at local expense. The rebels descended on Camulodunum and destroyed it, killing all those who could not escape.[9]

Boudica and her army headed for Londinium (London). So did Suetonius and a small portion of his army, but, arriving ahead of the rebels, concluded he did not have the numbers to defend the city and ordered it evacuated before it was attacked. It, too, was burnt to the ground and the Roman historian Tacitus claims every inhabitant who could not get away was killed.[10]

While Boudica's army continued their assault in Verulamium (St. Albans), Suetonius regrouped his forces. According to Tacitus, he amassed a force including his own Legio XIV Gemina, parts of the XX Valeria Victrix, and any available auxiliaries, a total of 10,000 men.[11] A third legion, II Augusta, near Exeter, failed to join him;[12] a fourth, IX Hispana, had been routed trying to relieve Camulodunum.[13]

Hugely outnumbered, Suetonius would have chosen his battleground carefully. He selected a narrow gorge with a forest behind him, opening out into a wide plain. The gorge protected the Roman flanks from attack, whilst the forest would impede approach from the rear. This would have prevented Boudica from bringing considerable forces to bear on the Roman position, and the open plain in front made ambushes impossible. Suetonius placed his legionaries in close order, with lightly armed auxiliaries on the flanks and cavalry on the wings.[13] 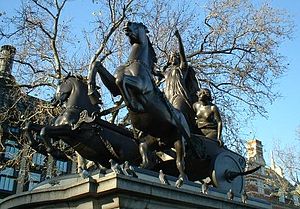 Boadicea by Thomas Thornycroft, depicting Boadicea with her daughters in their chariot as she addresses troops before the battle.

As their armies deployed, the commanders would have sought to motivate their soldiers. Tacitus, who wrote of the battle more than fifty years later, claims to relate Boudica's speech to her followers:

"'But now,' she said, 'it is not as a woman descended from noble ancestry, but as one of the people that I am avenging lost freedom, my scourged body, the outraged chastity of my daughters. Roman lust has gone so far that not our very persons, nor even age or virginity, are left unpolluted. But heaven is on the side of a righteous vengeance; a legion which dared to fight has perished; the rest are hiding themselves in their camp, or are thinking anxiously of flight. They will not sustain even the din and the shout of so many thousands, much less our charge and our blows. If you weigh well the strength of the armies, and the causes of the war, you will see that in this battle you must conquer or die. This is a woman's resolve; as for men, they may live and be slaves.'"[14]

Although the Britons gathered in considerable force, they are said to have been poorly equipped, their military strength having been impaired by an Iceni disarmament that had preceded the rebellion.[15] They placed their wagon train in a crescent at the large end of the field, from which point their families could watch what they may have expected to be an overwhelming victory.[11] Two Germanic leaders, Boiorix of the Cimbri and Ariovistus of the Suebi, are reported to have done the same thing in their battles against Gaius Marius and Julius Caesar respectively.[16]

"Ignore the racket made by these savages. There are more women than men in their ranks. They are not soldiers—they're not even properly equipped. We've beaten them before and when they see our weapons and feel our spirit, they'll crack. Stick together. Throw the javelins, then push forward: knock them down with your shields and finish them off with your swords. Forget about plunder. Just win and you'll have everything."[17]

Although Tacitus, like many historians of his day, was given to invent stirring speeches for such occasions, Suetonius's speech here is unusually blunt and practical. Tacitus's father-in-law, the future governor Gnaeus Julius Agricola, was on Suetonius's staff at the time and may have reported it fairly accurately.[18]

Boudica led her army forward across the plain and into the narrowing field in a massive frontal attack. As they advanced, they were channelled into a tightly packed mass. At approximately forty yards, their advance was staggered by a volley of Roman pila, the Roman javelin. The pilum was designed to bend when it hit a shield, making it impossible to pull out; the enemy would either be encumbered with a heavy iron spear weighing down his shield, or have to discard it and fight unprotected;[19] A second volley followed, as each Roman legionary carried two pila.[20] This tactic destroyed any organised advance by the Britons.

With the Britons in disarray, Suetonius ordered his legionaries and auxiliaries to push forward in small units. With their superior discipline, the Romans were able to continue fighting as fiercely as ever. With a clear advantage in armour, weapons, and discipline, they had a decisive edge in the close quarters fighting against the tightly packed Britons. The cavalry, lances extended, then entered the fray. As their losses mounted, the Britons tried to retreat, but their flight was blocked by the ring of wagons and they were massacred. The cavalry also attacked the Britons from the flanks as the Roman infantry advanced. The Romans killed not only the warriors but also the women, children, and even pack animals. Tacitus relates a rumour that 80,000 Britons fell for the loss of only 400 Romans.[12] However the figures quoted for the campaign in the ancient sources are regarded by modern historians as extravagant.[21][22]

Boudica is said by Tacitus to have poisoned herself;[12] Cassius Dio says Boudica fell ill and died and was given a lavish burial.[23] Poenius Postumus, prefect of the 2nd legion, which had failed to join the battle, having robbed his men of a share of the glory, committed suicide by falling on his sword.[12]

The site of the battle is not given by either historian, although Tacitus gives a brief description.[12] A wide variety of sites, all consistent with an army attacking from the area of London toward the Roman forces concentrating from the direction of Cornwall and Wales, has been suggested. One legend places it at Battle Bridge Road in King's Cross, London, although from reading Tacitus it is unlikely Suetonius returned to the city.

Most historians favour a site in the Midlands, probably along the Roman road of Watling Street between Londinium and Viroconium (Wroxeter in Shropshire), now the A5. Plausible suggestions include Manduessedum (Mancetter), near Atherstone in Warwickshire,[24] a site close to High Cross in Leicestershire,[25] and a small dip at Cuttle Mill, two miles south-east of Lactodorum (Towcester) in Northamptonshire.[26] In 2009 Arbury Banks, near Ashwell (Herts.)[27] was suggested as a location.

In March 2010 evidence was published suggesting the site may be located at Church Stowe, Northamptonshire.[28] The Kennet valley, close to Silchester has also been suggested as a candidate site for the battle.[29]

More recently a suggestion has been made that the battlefield was on the A5 just south of Dunstable, Bedfordshire.[30]

It is said that the emperor Nero was so shaken by these events that he considered withdrawing from Britain altogether,[31] but with the revolt brought to a decisive end, the occupation of Britain continued.

The defeat of Boudicca ensured Roman rule in southern Britain; however, northern Britain remained volatile. In AD 69 a Venutius,a Brigantes noble would lead another less well documented revolt, initially as a tribal rivalry but soon becoming anti-Roman in nature.[33]