The Battle of White Mountain (Czech: Bitva na Bílé hoře), was an early battle in the Thirty Years' War fought on 8 November 1620, in which an army of 30,000 Bohemians and mercenaries under Christian of Anhalt were defeated by 27,000 men of the combined armies of Ferdinand II, Holy Roman Emperor under Charles Bonaventure de Longueval, Count of Bucquoy and the German Catholic League under Johann Tserclaes, Count of Tilly at Bílá Hora ("White Mountain"), near Prague (now part of the city).[2] The battle marked the end of the Bohemian period of the Thirty Years' War and decisively influenced the fate of the Czech lands for the next 300 years.

In the early 17th Century most of the Bohemian estates, although under the dominion of the predominantly Roman Catholic Holy Roman Empire, had large Protestant populations, and had been granted rights and protections allowing them varying degrees of religious and political freedom. In 1617, as Emperor Matthias lay dying, his cousin Ferdinand — a fiercely devout Roman Catholic and proponent of the Counter-Reformation — was named his successor as Holy Roman Emperor and King of Bohemia. This led to deep consternation among many Bohemian Protestants, who feared not only the loss of their religious freedom, but also of their traditional semi-autonomy, under which many of the estates had separate, individual constitutions governing their relationship with the Empire, and where the King was elected by the local leaders.[3]

Ferdinand (who would become Emperor Ferdinand II following Matthias' death in 1619) saw Protestantism as inimical to the Empire, and wanted to impose absolutist rule on Bohemia while forcefully encouraging conversion to the Roman Catholic faith. He also hoped to reclaim church properties which had been seized by Protestants at the start of the Reformation decades earlier, and to do away with the Electorate - the body of princes who chose the Holy Roman Emperor and who had considerable power over Imperial policy.[dubious – discuss]

Particularly galling to Protestants were perceived violations of Emperor Rudolf II's 1609 Letter of Majesty, which had ensured religious freedom throughout Bohemia.[4] In May, 1618, wanting to air their grievances over this and other issues, a group of Bohemian noblemen met representatives of the Emperor at the royal castle in Prague; the meeting ended with two of the representatives and their scribe being thrown out a high window and seriously injured. This incident, known as the Second Defenestration of Prague, triggered the Bohemian Revolt.[5]

In November 1619, Elector Palatine Frederick V, who like many of the rebels was a Calvinist, was chosen as King of Bohemia by the Bohemian Electorate. 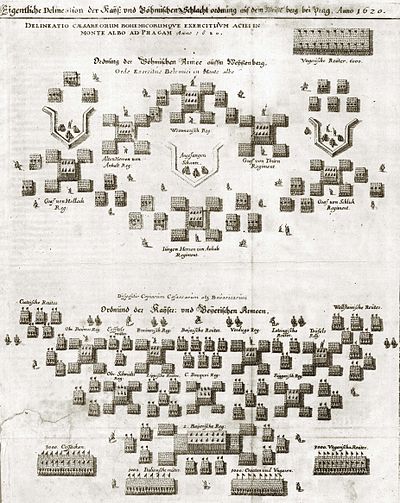 Plan of the battle from Theatrum Europaeum: Bohemians above, Imperial and Bavarian forces below

In 1620, now fully established as Emperor, Ferdinand II set out to conquer Bohemia and make an example of the rebels. King Frederick and his military commander, Prince Christian of Anhalt, had organized a Protestant army of 30,000 men; Ferdinand countered with a force of 25,000, many of them seasoned soldiers, under the capable leadership of Field Marshal Tilly, a Roman Catholic Spanish-Flemish nobleman. Tilly's army enjoyed the advantage of including two of the most successful military leaders in European history - Tilly himself and the future General Wallenstein. Tilly's force was made up of two distinct groups: Imperial troops commanded by Charles Bonaventure de Longueval, Count of Bucquoy, and soldiers of the German Catholic League, directly under Tilly. All of the armies of the day employed numerous mercenaries, including, by some definitions, Tilly himself. Serving with the Catholic League as an official observer was the future "father of modern philosophy", René Descartes.

After conquering most of western Bohemia, the Imperial army made for Prague, the Bohemian capital, then in rebel hands. The Bohemians attempted to block them by setting up defensive positions, which the Imperial army simply bypassed. Force-marching his men, Christian of Anhalt managed to get ahead of the Imperial army just before Prague. He thus gained an advantageous position on the "White Mountain", actually a low plateau, but had little time to set up defensive works. Enthusiasm for joining battle was low on both sides. After the reverses of the previous several weeks, Christian of Anhalt's army had been reduced to about 15,000 men, with little prospect of victory; the mercenaries on both sides had not been paid in months; and with winter approaching, cold, wet, weather made for less than ideal combat conditions.

On November 8 a small Imperial force was sent to probe the Protestant flank. To their surprise, the Bohemians retreated at their advance. Tilly quickly sent in reinforcements, and the Bohemian flank began to crumble. Anhalt tried to retrieve the situation by sending forward infantry and cavalry led by his son Christian II. The cavalry charged into the Imperial infantry, causing significant casualties, but Tilly countered with his own cavalry, forcing the Bohemian horsemen to retire. The Bohemian infantry, who were only now approaching the Imperial army, saw the cavalry retreating, at which they fired one volley at extreme range before retreating themselves. A small group of Imperial cavalry began circling the Protestant forces, driving them to the middle of the battlefield. With the Bohemian army already demoralized, company after company began retreating, most without having actually entered the battle. Tilly and his Imperial cavalrymen advanced with 2,000 Bavarian hussars, steadily pushing Protestant forces back to the Star Palace (just west of Prague), where the rebels tried without success to establish a line of defense.

The Battle of White Mountain was more a skirmish than a full-fledged battle. The Bohemian army was no match for the Emperor Ferdinand's troops. The actual battle lasted only an hour and left the Bohemian army in tatters. Some 4,000 Protestants were killed or captured, while Imperial losses amounted to only about 700.[6] 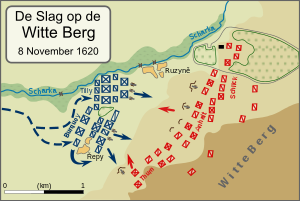 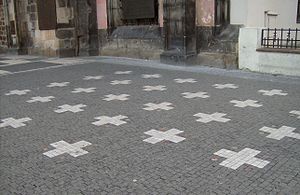 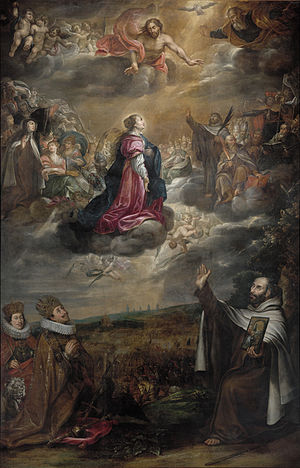 Picture celebrating the Catholic victory. In the upper part there is Our Lady of Victory surrounded by saints, in the lower left-hand corner there is the victorious Emperor Ferdinand II with his son Ferdinand III and the Bohemian lion.

With the Bohemian army destroyed, Tilly entered Prague and the revolt collapsed. King Frederick with his wife Elizabeth fled the country (hence his nickname the Winter King), and many Bohemians welcomed the restoration of Roman Catholic rule. Forty-seven leaders of the insurrection were put on trial, and twenty-seven of them were executed in Prague's Old Town Square on what came to be called the "Old Town Square execution". Amongst those executed were Kryštof Harant and Jan Jesenius. Today, 27 crosses have been laid into the cobblestones as a tribute to those victims. An estimated five-sixths of the Bohemian nobility went into exile soon after the Battle of White Mountain, and their properties were confiscated.[7]

There remained a strong Protestant army in Silesia under the command of Johann Georg of Hohenzollern, Duke of Krnov, which continued fighting the Imperial army in Moravia and in what today is Slovakia until 1623.

In 1621, the Emperor ordered all Calvinists and other non-Lutherans to leave the realm in three days or to convert to Roman Catholicism. The next year, he also ordered all Lutherans (most of whom had not been involved in the revolt) to convert or else leave the country. By 1627, Archbishop Harrach of Prague and Jaroslav Borzita of Martinice set out to convert the heretics, as they were termed, by peaceful means; most Bohemians converted, but a significant Protestant minority remained. Spanish troops, seeking to encircle their rebellious Dutch provinces, seized the Palatinate lands. With the prospect of Protestantism being overrun in Germany, Denmark entered the struggle. Sweden was to join the Protestant forces in 1630.