The Battle of Zenta or Battle of Senta, fought on 11 September 1697 just south of Zenta (Serbian: Senta; then part of the Ottoman Empire; today in Serbia), on the east side of the Tisa river, was a major engagement in the Great Turkish War (1683–1699) and one of the most decisive defeats in Ottoman history. In a surprise attack, Habsburg Imperial forces routed the Ottoman army which was crossing the river. At the cost of a few hundred losses, the Habsburg forces inflicted 30,000 casualties on the Ottomans, dispersed the remainder and captured the Ottoman treasure. As an immediate consequence, the Ottoman Empire lost control over Banat, while in the long run, the Habsburg victory at Zenta was the last decisive step to force the Ottoman Empire into the Treaty of Karlowitz (1699), ending the Ottoman control of large parts of Central Europe.

After the relief of the Habsburg capital in the Battle of Vienna of 1683, Austria enjoyed great success and by 1688 Belgrade and most of the Pannonian Plain was occupied by the Habsburgs. But as the war with the French demanded more troops, and the new grand vizier reorganized and reinvigorated the Ottoman Army, the success ended. Belgrade was recaptured by the Ottomans in 1690 and the following year’s campaign was relatively indecisive. Subsequently, the Ottoman army commanded by Sultan Mustafa II won three consecutive victories at the Battle of Lugos (1695), Battle of Ulaş (1696), and Battle of Cenei (1696).

At the Battle of Zenta in 1697, the Austrians would be led by Eugene of Savoy in his first independent command; it was to be the first of a series of spectacular campaigns for the Prince.

Prince Eugene was made commander in chief of the Army in the newly conquered Pannonian Plain on 5 July 1697. His army consisted of 70,000 men at full strength of whom only 35,000 were ready for battle. As the war chest was empty, Eugene had to borrow money in order to pay wages and to create a working medical service.

The Habsburg Army consisted of German, Austrian, and Hungarian infantry and cavalry forces (approx. 7,000 soldiers).[6] Thanks to Palatine Paul Eszterházy, the Habsburg Kingdom of Hungary contributed to Ottoman-Habsburg wars with 20,000 soldiers.[7] Serb light cavalry and militia conscripts also took part in the coalition.[8][9]

When news arrived that the Sultan and his army were in Belgrade, Eugene decided to concentrate all his available troops from Upper Hungary and Transylvania and started to move his troops towards Petrovaradin. After the concentration took place, Eugene had an Imperial army of 50,000 to 55,000 men to face the Ottomans. On July 18, in the village of Kolut, Eugene held a military review of his forces. Soon he left with forces to Petrovaradin via Sombor.[10] During August, Eugene offered battle in the neighborhood of the fortress of Petrovaradin but the Ottomans, attempting to start a siege, refused to engage in battle. In September the Ottomans moved north in an attempt to capture the fortress of Szeged and the Imperial army followed.

There were few Kuruc cavalries in the Ottoman army under Imre Thököly, however most of them fought alongside the Austrians. Thököly was in charge of the Ottoman cavalry in battle.[11] 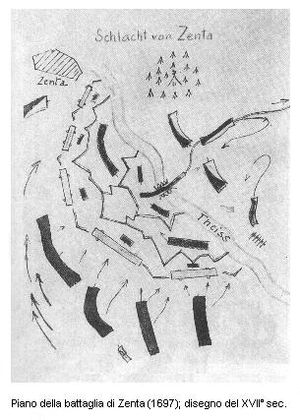 After the capture of Cafer Pasha (Djafer Pasha) by the imperial cavalry, the plan for the siege of Szeged was abandoned and the Sultan decided to return to winter quarters near Timişoara. When Eugene learned of these movements, he decided to force a battle.

On 11 September 1697, the Ottoman army began to ford the river Tisa (Tisza, Theiss) near Zenta (Senta), unaware that the Hungarian Imperial Army was nearby. The Imperial army was able to surprise and attack the Ottoman forces while they were in the process of crossing the river. After an intensive artillery bombardment, many Imperial Dragoon regiments dismounted and proceeded to the moat encircling and engaging the Ottoman camp. Ottoman troops behind the entrenchments retreated in confusion to the bridge, which was now overcrowded. Austrian artillery targeted the Ottoman troops and slaughtered them. The left flank of the Imperial army attacked, penetrating between the Ottoman left flank and the bridge, cutting off their retreat. At the same time, Imperial forces attacked from the front and, after ferocious close-quarter fighting, broke through the trenches surrounding the Ottoman camp. Inside the camp, beyond the camp-wagons, the slaughter was terrible. Imperial soldiers pressed the attack relentlessly. Barely a thousand Ottoman soldiers escaped. More than 10,000 Ottoman troops drowned in the Tisa river. Up to 20,000 Ottoman soldiers were slaughtered on the battlefield.[citation needed]

The battle resulted in a spectacular victory for Austria; at the cost of 500 men they had inflicted the loss of 30,000 men and captured the sultan's harem, 87 cannons, the royal treasure chest and the state seal of the Ottoman Empire. According to Prinz Eugen (1960, biography) by Alexander Lernet-Holenia, the startled Austrians even captured a train of camels. The main Ottoman army was scattered and the Austrians gained complete freedom of action in Bosnia, where Sarajevo was sacked.

By the terms of the Treaty of Karlowitz in 1699, the Austrians forced the sultan Mustafa II to make peace with the Emperor, and to cede Transylvania and the Ottoman eyalets of Egri, Varat, and Kanije, as well as much of the eyalet of Budin and parts of the eyalets of Temeşvar and Bosnia. These territories were later transformed or integrated into Habsburg provinces known as the Principality of Transylvania, Kingdom of Hungary, Kingdom of Slavonia, and the Military Frontier.

Many Imperial soldiers were rewarded after the bloody battle.