The Battle of Zorndorf was a battle fought on August 25, 1758 during the Seven Years' War, fought between the forces of the Russians troops under the command of Count William Fermor and a Prussian army under King Frederick the Great. The battle was tactically inconclusive, with both armies holding the ground and claiming victory.[10] The site of the battle was the Prussian village Zorndorf (now Sarbinowo, Poland).

After the victory at Kolín, having pushed the Prussians out of Bohemia in the summer of 1757, and the cleverly waged campaign in the autumn that saw Lieutenant-General the Duke of Bevern's Prussians defeated at the Battle of Breslau (22 November 1757), Empress Maria Theresa of Austria believed her fortunes were taking a turn for the better. In August 1758, Austria's ally Russia invaded East Prussia with 43,000 troops under William Fermor advanced within 100 km (62 mi) of Berlin, and were poised to join the Austrians under Field Marshal Daun. The king, Frederick II of Prussia, understood that the joining of his enemies would spell the fall of Berlin and, deciding to forestall their plans, moved to the Russian rear. Fermor, who was then besieging Küstrin, learned about his manoeuvre from a Cossack sortie. He lifted the siege and occupied a position at Zorndorf, 10 km (6 mi) northeast of Küstrin.

On August 25 Frederick's infantry attacked a Russian "Observation Corps", which consisted of young conscripts only. The Russians managed to hold their own until the famed cavalry of Friedrich Wilhelm von Seydlitz struck against them. The Russian cavalry clashed with the Prussians, but was routed and had to flee towards the lines of the Russian infantrymen who, confused by clouds of dust and gun smoke, mistook them for the Prussians and opened artillery fire.

In the meantime, Frederick's infantry fell upon the left wing of the Russian army. Frederick intended to repeat the oblique order assault that had granted him victory at the Battle of Leuthen, yet as the Russian lines were unable to retreat due to the swamps in their rear,[5] and the left flank of Frederick's army was likewise unable to enclose the Russian lines because of the unfavorable terrain and successful Russian resistance,[11] the battle took the course of an extremely bloody, frontal clash of the adversaries' armies within a narrow battlefield setting.[12]

During the ensuing battle, both sides quickly ran out of gunpowder and engaged in hand-to-hand fighting. When some of the Prussian battalions showed signs of tiring, Frederick himself led them in an attack. The battle was described by contemporaries as the bloodiest in the 18th century. One Prussian officer reported that "bodies of Russians covered the field row by row; they kissed their cannons while their bodies were cut to pieces by our sabers, but still they would not retreat".[verify] After the battle, Frederick famously declared that "it's easier to kill the Russians than to win over them". 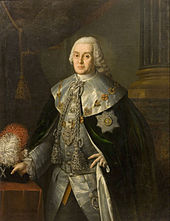 William Fermor, the Russian commander at the battle 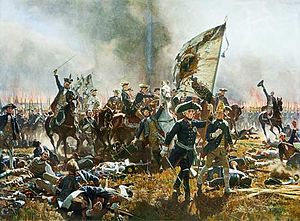 Carl Röchling (1904): Frederick the Great in the battle of Zorndorf before the frontline of the von Bülow regiment. The painting became a widely perceived symbol of the early 20th century ideal of soldiers' heroism.[13]

The Prussians lost 12,800 men, the Russians lost 18,000 in total. That the Russians took such heavy casualties and did not pull back, left an imprint on the Prussian soldiers and Frederick himself. Before the battle he regarded the Russian army as weaker than his own, but in this battle the Russians proved themselves tough opponents and Frederick was frustrated by their tenacity.[14] The battle appeared inconclusive, since neither side was defeated and driven from the battlefield. After the fighting, Frederick withdrew his cavalry to stop the ongoing skirmish with the Cossacks, thereby allowing the Russian army to re-establish contact with its supply wagons. Considering himself the victor, Fermor sent a letter to Saint Petersburg, assembled his troops into two columns and marched towards Landsberg to link up with the forces of Count Pyotr Rumyantsev.[15] The Prussians followed them but refrained from launching another attack.[16] This retreat prevented the Russians from reaching their Austrian allies and allowed Frederick to claim the battle as his victory, a view also popular in 19th century historiography,[7][17][18] although historians still dispute the outcome. While a strategic success for Frederick, the battle nonetheless took a severe toll on its army which was to fight further campaigns against numerically stronger forces.