From Infogalactic: the planetary knowledge core
Jump to: navigation, search
File:Gersdorff p21v.jpg
An illustration showing a variety of wounds from the Feldbuch der Wundarznei (Field manual for the treatment of wounds) by Hans von Gersdorff, (1517); illustration by Hans Wechtlin.

Battlefield medicine, also called field surgery and later combat casualty care, is the treatment of wounded combatants and non-combatants in or near an area of combat. Civilian medicine has been greatly advanced by procedures that were first developed to treat the wounds inflicted during combat. With the advent of advanced procedures and medical technology, even polytrauma can be survivable in modern wars. Battlefield medicine is a category of military medicine.

Chronology of medical advances on the battlefield

The term "Meatball surgery" is a term used in battlefield medicine to refer to surgery that is meant to be performed rapidly to stabilize the patient as quickly as possible. 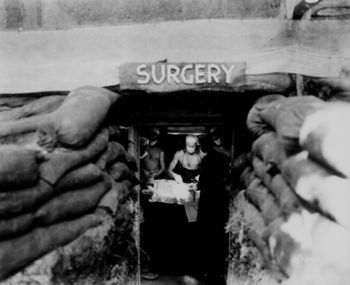 A US Army soldier, wounded by a Japanese sniper, undergoes surgery during the Bougainville Campaign in World War II.

Over the past decade combat medicine has improved drastically. Everything has been given a complete overhaul from the training to the gear. In 2011, all enlisted military medical training for the U.S. Navy, Air Force, and Army were located under one command, the Medical Education and Training Campus (METC). After attending a basic medical course there (which is similar to a civilian EMT course), the students go on to advanced training in Tactical Combat Casualty Care.[2]

Today, TCCC is becoming the standard of care for the tactical management of combat casualties within the Department of Defense and is the sole standard of care endorsed by both the American College of Surgeons and the National Association of EMT's for casualty management in tactical environments.[3]

TCCC is built around three definitive phases of casualty care:

Since "90% of combat deaths occur on the battlefield before the casualty ever reaches a medical treatment facility" (Col. Ron Bellamy) TCCC focuses training on major hemorrhaging, and airway complications such as a tension-pneumothorax. This has driven the casualty fatality rate down to less than 9%.[6][7]