In 2007 Mollema won the prestigious stage race for upcoming talents Tour de l'Avenir and the Circuito Montañés. He joined Rabobank's ProTeam in 2008, signing his first contract as a professional. His first notable result was a 6th position in the final classification of the 2008 Vuelta a Castilla y León. He made his ProTour debut in the 2008 Tour de Romandie, but did not finish the race due to a fall, which resulted in a fractured collarbone. He fully returned in top shape in the 2008 Deutschland Tour, in which he started as Rabobank's team leader, eventually finishing 7th in the GC. After a disappointing spring in 2009, the season was over for Mollema due to Pfeiffer's disease.

Mollema made his Grand Tour debut in the 2010 Giro d'Italia in which he made a good impression but fell short of a top 10 classification and winning the young rider competition, partially due to missing out on a break-away of 50 riders in which a lot of direct opponents gained a 12 minutes lead. Mollema continued to ride strong later in the season with a mountain stage win in the Tour de Pologne and a third place overall after winner Dan Martin and runner-up Grega Bole. 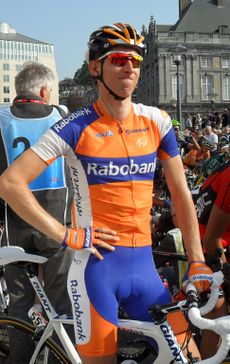 In the spring of 2011 he already showed good form with a ninth place overall in Paris–Nice and tenth overall in the Volta a Catalunya. He eventually did not show his good form in the Ardennes classics and rode disappointing results. The main objective of Mollema's 2011 season was his first ever Tour de France. As preparation for the Tour he rode, together with teammate Steven Kruijswijk, the Tour de Suisse. Both riders performed extremely well in a strong field. This resulted for Kruijswijk in a podium finish but Mollema fell short for the podium due to a flat tyre. Due to illness his General Classification in the Tour de France was not a success. In the last week he stated that he felt better and tried for a break-away. This resulted in a second place in the 17th stage after Edvald Boasson Hagen of Team Sky.

Mollema returned to action in his third Grand Tour, the 2011 Vuelta a España. On the steep uphill finishes in stage 5 and 8 he finished in the top five. He did not lose any crucial time in the first week and was awarded the red leader's jersey after his second place in stage 9. Due to his weaker time trial skills compared to other General Classification contenders such as Bradley Wiggins, Chris Froome and Vincenzo Nibali, he lost the leader's jersey a day after he had won it. Mollema rode well after the time trial and was heading for a podium position, but the Dutchman fell to a fourth place overall due to the performance of Juan José Cobo on the Alto de L'Angliru. Mollema eventually came onto the podium in Madrid as winner of the points classification. It was the first time since 1992 that a Dutchman won a major classification in a Grand Tour, after Eddy Bouwmans won the young rider classification in the Tour de France. 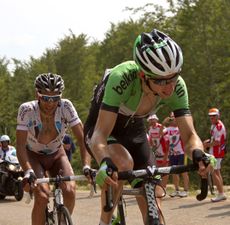 Mollema at the 2013 Tour de France

In 2013, Mollema carried some good form finishing 2nd in the Vuelta a Murcia, 3rd in the Vuelta a Andalucía, and 4th in the Criterium International. In the Tour de Suisse, Mollema won stage 2 marking his first victory in 2013.[2] After having a strong ride in the mountains, Mollema entered the final time trial in 4th position. He later moved up into 2nd that day.[3] 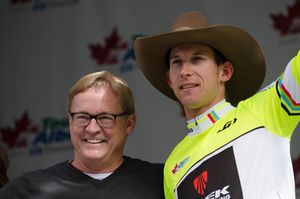 Mollema (right) with Alberta Culture Minister David Eggen following his win of the 2015 Tour of Alberta.