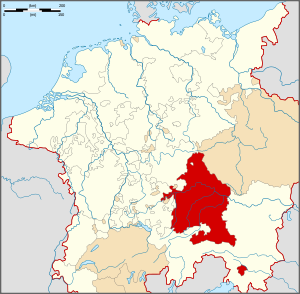 The Bavarian Circle as at the beginning of the 16th century

The Bavarian Circle (German: Bayerischer Reichskreis) was an Imperial Circle of the Holy Roman Empire.

The most significant state by far in the circle was the Duchy of Bavaria (raised to an Electorate by Emperor Ferdinand II in 1623) with the Upper Palatinate territories. Other Imperial Estates like the Prince-Archbishopric of Salzburg, the Prince-Bishoprics of Freising, Passau and Regensburg as well as the Imperial city of Regensburg, seat of the Imperial Diet from 1663, had a secondary importance.