listen); Austro-Bavarian: Boarisch [ˈbɔɑrɪʃ]), is a major group of Upper German varieties spoken in the southeast of the German language area, largely covered by Bavaria and Austria. It forms a continuum of more or less mutually intelligible local and regional variants.

The Bavarians as a group formed in the early medieval period, as the population of the Duchy of Bavaria, forming the south-eastern part of the kingdom of Germany. The Old High German documents from the area of Bavaria are identified as Altbairisch ("Old Bavarian"), even though at this early date there are no distinctive features that would divide it from Alemannic. The dialectal separation of Upper German into East Upper German (Bavarian) and West Upper German (Alemannic) becomes more tangible in the Middle High German period, from about the 12th century. 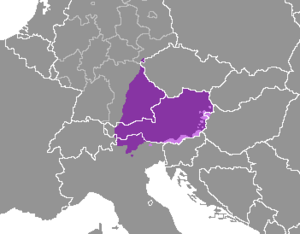 Map of the distribution of Bavarian speakers in Europe.

Differences are clearly noticeable within those three subgroups, which in Austria often coincide with the borders of the particular states. For example, each of the accents of Carinthia, Styria and Tyrol can be easily recognised. Also there is a marked difference between eastern and western central Bavarian, roughly coinciding with the border between Austria and Bavaria. In addition, the Viennese dialect has some characteristics distinguishing it from all other dialects. In Vienna, minor, but recognizable, variations are characteristic for distinct districts of the city. 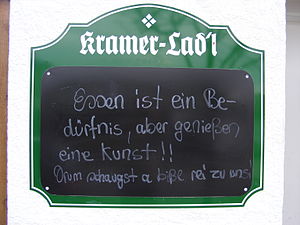 In contrast to many other varieties of German, Bavarian differs sufficiently from Standard German to make it difficult for native speakers to adopt standard pronunciation. All educated Bavarians and Austrians, however, can read, write and understand Standard German, but may have very little opportunity to speak it, especially in rural areas. In those regions, Standard German is restricted to use as the language of writing and the media. It is therefore often referred to as Schriftdeutsch ("written German") rather than the usual term Hochdeutsch ("High German" or "Standard German").

Although there exist grammars, vocabularies, and a translation of the Bible in Bavarian, there is no common orthographic standard. Poetry is written in various Bavarian dialects, and many pop songs use the language as well, especially ones belonging to the Austropop wave of the 1970s and 1980s.

Although Bavarian as a spoken language is in daily use in its region, Standard German, often with strong regional influence, is preferred in the mass media.

On the use of Bavarian and standard German in Austria see Austrian German.

Ludwig Thoma is a noted author who wrote works such as Lausbubengeschichten in Bavarian.

There is a Bavarian Wikipedia, completely in Bavarian.

Bavarian has an extensive vowel inventory, as is common for Germanic languages. Vowels can be grouped as back rounded, front unrounded and front rounded. They are also traditionally distinguished by length or tenseness.

The commonly accepted grammar and spelling system for Bavarian has been documented by A. Schmeller;[4] see more details at the German Wikipedia page for Bairische Dialekte

* These are typically used in the very northern dialects of Bavarian.

Just like the possessive pronouns listed above, the indefinite pronouns koana, "none", and oana, "one" are inflected the same way.

There is also the indefinite pronoun ebba, "someone" with its impersonal form ebbs, "something". It is inflected in the following way:

The Interrogative Pronouns wea, "who", and wås, "what" are inflected the same way the indefinite pronoun ebba is inflected.

Bavarians produce a variety of nicknames for those who bear traditional Bavarian or German names like Josef, Theresa or Georg (becoming Sepp'l or more commonly Sepp, Resi and Schorsch, respectively). Bavarians often refer to names with the family name coming first (like da Stoiber Ede instead of Edmund Stoiber). The use of the article is considered mandatory when using this linguistic variation. In addition, there exist for almost every family (especially in little villages), nicknames different from the family name. They consist largely of their profession, names or professions of deceased inhabitants of their homes or the site where their homes are located. This nickname is called Hausname (en: name of the house) and is seldom used to name the person, but more to state where they come from, live in or to whom they are related.

Samples of Bavarian and Austrian