Bay View is an unincorporated resort community and census designated place in the U.S. state of Michigan. It is located in Bear Creek Township, Emmet County on Little Traverse Bay and abuts the east side of the city of Petoskey along U.S. Highway 31. The ZIP code is 49770 and the FIPS place code is 06260. It was originally formed as part of the Methodist Camp Meeting movement and later adapted to the precepts of the Chautauqua movement.

The structures on the Bay View community consist of:[4] 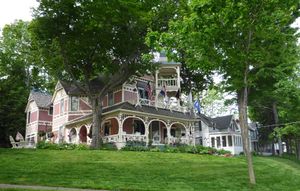 The Bay View Association of the United Methodist Church was founded in 1875 by a group of Methodists to be a retreat. An educational program of lectures and music began in 1886 and the community developed around these activities.[5] These programs, along with programs for children and a variety of classes, run from May through October of each year. The community is closed from November through April during which time the residences must be vacated. Bay View is known for its Victorian style cottages and peaceful scenery. The local camp was listed as a National Historic Landmark district in 1987 as one of the best-preserved examples of the Methodist Camp Meeting movement, as originally built in 1876, and then adapted to the Chautauqua movement in 1885 through 1915.[3]

Although Bay View has opened its membership to include those of other Christian-based faiths and those of different races and gender orientation, Bay View does not allow non-Christians to join the association. Membership in the Bay View Association is required to own a cottage in the community.[6]

On August 6, 2011 the Bay View Association members voted on a proposal that would remove the Christian affiliation requirement. The proposal was defeated by a vote of 52% (381 members) opposed to 48% (346 members) in favor of the proposal. The proposal needed a two thirds majority to pass.[7]

On August 3, 2013 another vote was taken to change the membership qualification requirements to include non-Christians. The proposal was again defeated by a vote of 51.85% (364 members) for the change to 48.14% (338 members) opposed to the change. A two-thirds majority is required to pass the amendment.[8]