From Infogalactic: the planetary knowledge core
Jump to: navigation, search
For other uses, see Bayeux (disambiguation).

Bayeux (French pronunciation: ​[bajø]) is a commune in the Calvados department in Normandy in northwestern France.

Bayeux is the home of the Bayeux Tapestry, which depicts the events leading up to the Norman conquest of England.

Bayeux is a sub-prefecture of Calvados. It is the seat of the arrondissement of Bayeux and of the canton of Bayeux.

Bayeux is located 7 kilometres (4 miles) from the coast of the English Channel and 30 km (19 mi) north-west of Caen. The city, with elevations varying from 32 to 67 metres (105 to 220 feet) above sea level – with an average of 46 metres (151 feet) – is bisected by the River Aure. Bayeux is located at the crossroads of RN 13 and the train route Paris-Caen-Cherbourg. The city is the capital of the Bessin, which extends north-west of Calvados.

In the Late Empire it took the name of the Celtic tribe who lived here : the Bodiocassi, Latinized in Bajocassi, Bajocasses, and this word explains the place-names Bayeux and Bessin. Bodiocassi has been compared with Old Irish Buidechass 'with blond locks'.[2]

Founded as a Gallo-Roman settlement in the 1st century BC under the name Augustodurum, Bayeux is the capital of the former territory of the Bodiocassi people of Gaul, whose name appears in the writings of Pliny the Elder. Evidence of earlier human occupation of the territory comes from fortified Celtic camps, but there is no evidence of any major pre-existing Celtic town before the organization of Gaul in Roman civitates. Any settlement was more likely confined to scattered Druid huts along the banks of the Aure and Drome rivers or on Mount Phaunus where they worshiped. Cemeteries have been found on the nearby Mount Phaunus indicating the area as a Druid centre. Titus Sabinus, a lieutenant of Julius Caesar, subjected the Bessin region to Roman domination.

The town is mentioned by Ptolemy, writing in the reign of Antoninus Pius under the name Noemagus Biducassium (for *Noviomagus Badiocassium 'New market of the Badiocassi') and remained so until the time of the Roman Empire. The main street was already the heart of the city. A pair of spas under the Church of St. Lawrence and the Dairy Street Post Office and a sculpted head of the goddess Minvera have been found attesting to the adoption of Roman culture. In 1990 a closer examination of huge blocks discovered in the cathedral in the 19th century indicated the presence of an old Roman building. Bayeux was built on a crossroads between Lisieux and Valognes, developing first on the west bank of the river. By the end of the 3rd century a walled enclosure surrounded the city until it was removed in the 18th century. Its layout is still visible and can be followed today. The citadel of the city was located in the southwest corner and the cathedral the southeast. An important city in Normandy, Bayeux was part of the coastal defence of the Roman Empire against the pirates of the region and a Roman Legion was stationed there. 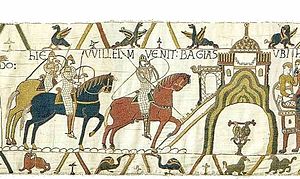 Bayeux (Bagias), depicted in scene 22 of the Bayeux Tapestry

The city was largely destroyed during the Viking raids of the late 9th century but was rebuilt in the early 10th century under the reign of Bothon. The 11th century saw the creation of five villages beyond the walls to the north east evidence of its growth during Ducal Normandy. William the Conqueror's half brother Odo, Earl of Kent completed the cathedral in the city and it was dedicated in 1077. However the city began to lose prominence when William placed his capital at Caen. When King Henry I of England defeated his brother Robert Curthose for the rule of Normandy, the city was burned to set an example to the rest of the duchy. Under Richard the Lionheart, Bayeux was wealthy enough to purchase a municipal charter. From the end of Richard's reign to the end of the Hundred Years' War, Bayeux was repeatedly pillaged until Henry V of England captured of the city in 1417. After the Battle of Formigny, Charles VII of France recaptured the city and granted a general amnesty to its populace in 1450. The capture of Bayeux heralded a return to prosperity as new families replaced those decimated by war and these built some 60 mansions scattered throughout the city, with stone supplanting wood. 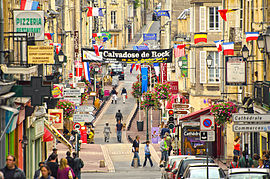 The area around Bayeux is called the Bessin, which was the bailiwick of the province Normandy until the French Revolution. During the Second World War, Bayeux was the first city of the Battle of Normandy to be liberated, and on 16 June 1944 General Charles de Gaulle made the first of two major speeches in Bayeux in which he made clear that France sided with the Allies. The buildings in Bayeux were virtually untouched during the Battle of Normandy, the German forces being fully involved in defending Caen from the Allies.

The Bayeux War Cemetery with its memorial includes the largest British cemetery dating from the Second World War in France. There are 4,648 graves, including 3,935 British and 466 Germans. Most of those buried there were killed in the invasion of Normandy.

The Royal British Legion National, every 5 June at 1530 hrs, attends the 3rd Division Cean Memorial Service and beating retreat ceremony. On the 6th of June, it holds a remembrance service in Bayeux Cathedral starting at 1015 hrs, and later at 1200 hrs, the Royal British Legion National holds a service of remembrance at the Bayeux Cemetery. All services are open to the public, all Standards RBL NVA RN ARMY RAF service and Regimental Associations are welcome to attend and parade. Details can be found at www.rblsomme.org

The French town of Bayeux is also the home of a memorial to all of the journalists who have lost their lives while reporting. The memorial was designed by Samuel Craquelin, who is a French architect. The memorial lists the names of 1,889 journalists killed between 1944 and 2007. The memorial was established in Bayeux because of its historic liberation on 7 June 1944.[3]

The river Aure flows through Bayeux, offering panoramic views from a number of locations. The Aure has a relatively high level of turbidity and the speed of its brownish water is moderate because of the slight slope of the watercourse, although where it is narrow in places like the centre of Bayeux, higher surface speeds are generated. In the centre of Bayeux near the Bayeux Tapestry Museum, pH levels were measured at 8.35 and the electrical conductivity of water was tested at 37 microsiemens per centimetre. Turbidity was measured at 13 centimetres by the Secchi disk method. At this point of reference, flows are generally of the order of 50 cubic feet per second (1.4 m3/s).[4] 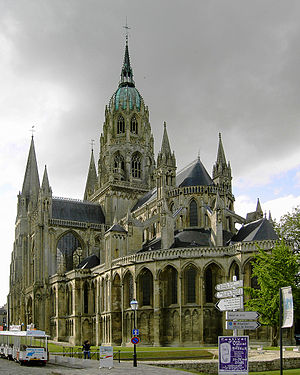 Bayeux is a major tourist attraction, best known to British and French visitors for the Bayeux tapestry, made to commemorate events in the Norman Conquest of England in 1066. According to the legend, the tapestry was made by Reine Mathilde, wife of William the Conqueror. In fact, it may have been designed and woven in England.[5] It is displayed in a museum in the town centre. The large Norman-Romanesque and Gothic Cathédrale Notre-Dame de Bayeux,[6] consecrated in 1077, was arguably the original home of the tapestry where William's half-brother Odo of Bayeux (represented on the tapestry with a wooden club at the Battle of Hastings), would have had it displayed.

The Jardin botanique de Bayeux is a botanical garden dating from 1864.

Bayeux is twinned with:[7]