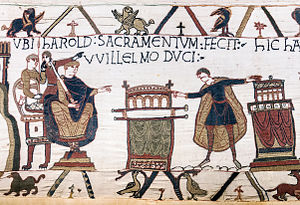 UBI HAROLD SACRAMENTUM FECIT WILLELMO DUCI (Where Harold made an oath to Duke William). This scene, which is stated in the previous scene on the Tapestry to have taken place at Bagia (Bayeux, probably in Bayeux Cathedral), shows Harold touching two altars with the enthroned Duke looking on and is central to the Norman Conquest of England. (Bayeux Tapestry)

Bayeux Cathedral (Cathédrale Notre-Dame de Bayeux) is a Norman-Romanesque cathedral, located in the town of Bayeux. It is the seat of the Bishop of Bayeux. It was the original home of the Bayeux Tapestry and is a national monument of France.

The site is an ancient one and was once occupied by Roman sanctuaries. The present cathedral was consecrated on 14 July 1077 in the presence of William, Duke of Normandy and King of England. It was here that William forced Harold Godwinson to take the oath, the breaking of which led to the Norman conquest of England.