Bayfordbury, Hertfordshire is the location of a University of Hertfordshire campus, housing their biology/geography field station and observatory. The site is also home to the Regional Science Learning Centre, which runs training courses for teachers and technicians in science learning for early years, primary and secondary. Also located here is a large Grade II* listed country house and parkland. 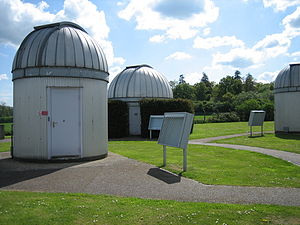 The domes housing some of the optical telescopes at Bayfordbury Observatory

The site is the location of the University of Hertfordshire's astronomical and atmospheric physics remote sensing observatory, and one of the largest teaching astronomical observatories in the UK.[1]

In 2005 the Regional Science Learning Centre was set up at Bayfordbury to run courses that provide continuing professional development for anyone involved in the teaching of science.[2] The Science Learning Centre has close ties with the nearby observatory and hosts activities during their astronomy open evenings such as planetarium shows and talks. The building also hosts some of the observatory's scientific instruments on its roof.[3]

The University of Hertfordshire use the site as their biology and geography field station. The university owns a number of Bayfordbury's woodlands and meadows including the Clinton-Baker Pinetum, Sailor's Grove and Hook's Grove.[4] The lake at Bayfordbury was created by the Baker family in 1772 [5] and is now managed for its newts, crayfish and pure genetic stock of Crucian carp. The site also houses 5 large glasshouses, used for plant and aquatic research.[6]

The 372 acre Bayfordbury estate was bought by the John Innes Centre in 1948 where it was developed into a School of Cytology.[7] A new Cell Biology building was built in 1959,[8] which would later become the Science Learning Centre. In 1967 they moved to their present site at Norwich, and the Bayfordbury estate was bought by the University of Hertfordshire.

The Clinton-Baker Pinetum is a 10 acre pinetum containing over 150 species of conifers from all over the world, many over 100 years old. The first conifers were planted in 1767 by Sir William Baker, the original owner of the mansion,[9] and is now currently being restored by volunteers.[10]