From Infogalactic: the planetary knowledge core
Jump to: navigation, search
For other uses, see Bayswater (disambiguation).

Bayswater is an area within the City of Westminster and the Royal Borough of Kensington and Chelsea in central London.[1] It is a built-up district located 4 km (about 2.5 miles) west-north-west of Charing Cross, bordering the north of Kensington Gardens and having a population density of 17,500 per square kilometre.

Bayswater is one of London's most cosmopolitan areas: a diverse local population is augmented by a high concentration of hotels. As well as the native English there are many other nationalities: in particular there is a significant Arab population, a large Greek community (attracted by St Sophia's Cathedral, Moscow Road – London's Greek Orthodox Cathedral), many Americans and London's biggest Brazilian community.

The area has attractive streets and garden squares lined with Victorian stucco terraces, mostly now subdivided into flats and boarding houses. The property ranges from very expensive apartments to small studio flats. There are also purpose-built apartment blocks dating from the inter-war period as well as more recent developments, and a large council estate, the 650-flat Hallfield Estate, designed by Sir Denys Lasdun and now largely sold off.

Queensway and Westbourne Grove are its busiest main streets, both having many ethnic-cuisine restaurants.

The land now called Bayswater belonged to the Abbey of Westminster when the Domesday Book was compiled; the most considerable tenant under the abbot was Bainiardus, probably the same Norman associate of the Conqueror who gave his name to Baynard's Castle. The descent of the land held by him cannot be clearly traced: but his name long remained attached to part of it; and, as late as the year 1653, a parliamentary grant of the Abbey or Chapter lands describes "the common field at Paddington" as being "near a place commonly called Baynard's Watering."[citation needed] In 1720, the lands of the Dean and Chapter are described to be the occupation of Alexander Bond, of Bear's Watering, in the same parish of Paddington.[citation needed] It may therefore fairly be concluded that this portion of ground, always remarkable for its springs of excellent water, once supplied water to Baynard, his household, or his cattle; that the memory of his name was preserved in the neighbourhood for six centuries; and that his watering-place now takes the abbreviated name Bayswater.

Various persons of international renown are frequently reported as buying property in the area, including Claudia Schiffer.

The Bayswater area elects a total of six councillors to Westminster City Council, three each from the eponymous Bayswater Ward,[4] and from Lancaster Gate Ward.[5]

Currently, all six are of the Conservative Party, with the Bayswater Ward showing a more than 250-vote Conservative majority (over the Liberal Democrats) and Lancaster Gate being a safe Conservative ward.

For education in Bayswater, see List of schools in the City of Westminster. 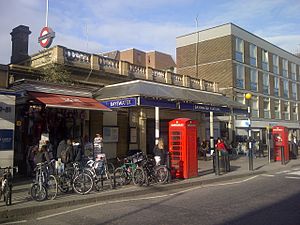