From Infogalactic: the planetary knowledge core
Jump to: navigation, search
For other uses, see Bean (disambiguation). 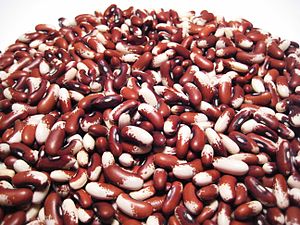 Bean (/ˈbiːn/) is a common name for large plant seeds of several genera of the family Fabaceae (alternately Leguminosae) which are used for human or animal food.

The term bean originally referred to the seed of the broad or fava bean,[citation needed] but was later expanded to include members of the New World genus Phaseolus, such as the common bean and the runner bean, and the related genus Vigna. The term is now applied generally to many other related plants such as Old World soybeans, peas, chickpeas (garbanzo beans), vetches, and lupins.[citation needed]

Bean is sometimes used as a synonym of pulse,[citation needed] an edible legume, though the term pulses is more correctly reserved for leguminous crops harvested for their dry grain. The term bean usually excludes crops used mainly for oil extraction (such as soy-beans and pea-nuts), as well as those used exclusively for sowing purposes (such as clover and alfalfa). Leguminous crops harvested green for food, such as snap peas, snow peas, and so on, are not considered beans, and are classified as vegetable crops. According to the United Nations Food and Agriculture Organization the term bean should include only species of Phaseolus; however, a strict consensus definition has proven difficult because in the past, several species such as Vigna angularis (azuki bean), mungo (black gram), radiata (green gram), aconitifolia (moth bean)) were classified as Phaseolus and later reclassified. The use of the term bean to refer to species other than Phaseolus thus remains. In some countries, the term bean can mean a host of different species.[1]

In English usage, the word bean is also sometimes used to refer to the seeds or pods of plants that are not in the family leguminosae, but which bear a superficial resemblance to true beans—for example coffee beans, castor beans and cocoa beans (which resemble bean seeds), and vanilla beans, which superficially resemble bean pods. 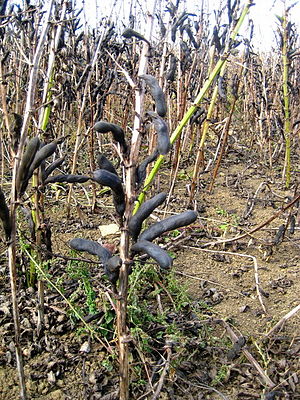 Unlike the closely related pea, beans are a summer crop that need warm temperatures to grow. Maturity is typically 55–60 days from planting to harvest. As the bean pods mature, they turn yellow and dry up, and the beans inside change from green to their mature colour. As a vine, bean plants need external support, which may be provided in the form of special "bean cages" or poles. Native Americans customarily grew them along with corn and squash (the so-called Three Sisters), with the tall cornstalks acting as support for the beans.

In more recent times, the so-called "bush bean" has been developed which does not require support and has all its pods develop simultaneously (as opposed to pole beans which develop gradually). This makes the bush bean more practical for commercial production. 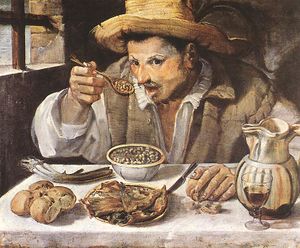 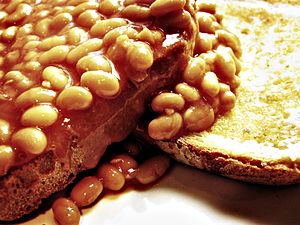 Beans are one of the longest-cultivated plants. Broad beans, also called fava beans, in their wild state the size of a small fingernail, were gathered in Afghanistan and the Himalayan foothills.[2] In a form improved from naturally occurring types, they were grown in Thailand since the early seventh millennium BCE, predating ceramics.[3] They were deposited with the dead in ancient Egypt. Not until the second millennium BCE did cultivated, large-seeded broad beans appear in the Aegean, Iberia and transalpine Europe.[4] In the Iliad (8th century BCE) is a passing mention of beans and chickpeas cast on the threshing floor.[5]

Beans were an important source of protein throughout Old and New World history, and still are today.

The oldest-known domesticated beans in the Americas were found in Guitarrero Cave, an archaeological site in Peru, and dated to around the second millennium BCE.[6]

Most of the kinds commonly eaten fresh or dried, those of the genus Phaseolus, come originally from the Americas, being first seen by a European when Christopher Columbus, during his exploration of what may have been the Bahamas, found them growing in fields. Five kinds of Phaseolus beans were domesticated[7] by pre-Columbian peoples: common beans (Phaseolus vulgaris) grown from Chile to the northern part of what is now the United States, and lima and sieva beans (Phaseolus lunatus), as well as the less widely distributed teparies (Phaseolus acutifolius), scarlet runner beans (Phaseolus coccineus) and polyanthus beans (Phaseolus polyanthus)[8] One especially famous use of beans by pre-Columbian people as far north as the Atlantic seaboard is the "Three Sisters" method of companion plant cultivation:

In the New World, many tribes would grow beans together with maize (corn), and squash. The corn would not be planted in rows as is done by European agriculture, but in a checkerboard/hex fashion across a field, in separate patches of one to six stalks each.

Beans would be planted around the base of the developing stalks, and would vine their way up as the stalks grew. All American beans at that time were vine plants, "bush beans" having been bred only more recently. The cornstalks would work as a trellis for the beans, and the beans would provide much-needed nitrogen for the corn.

Squash would be planted in the spaces between the patches of corn in the field. They would be provided slight shelter from the sun by the corn, would shade the soil and reduce evaporation, and would deter many animals from attacking the corn and beans because their coarse, hairy vines and broad, stiff leaves are difficult or uncomfortable for animals such as deer and raccoons to walk through, crows to land on, etc.

Beans are a heliotropic plant, meaning that the leaves tilt throughout the day to face the sun. At night, they go into a folded "sleep" position.

Currently, the world genebanks hold about 40,000 bean varieties, although only a fraction are mass-produced for regular consumption.[9]

Some bean types include: 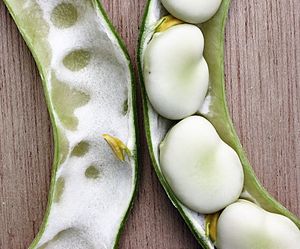 Vicia faba or broad beans, known in the US as fava beans 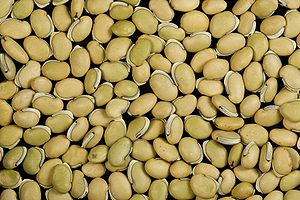 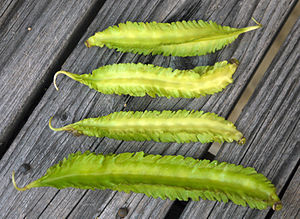 Some kinds of raw beans, especially red and kidney beans, contain a harmful toxin (lectin phytohaemagglutinin) that must be removed by cooking. A recommended method is to boil the beans for at least ten minutes; undercooked beans may be more toxic than raw beans.[10] Cooking beans in a slow cooker, because of the lower temperatures often used, may not destroy toxins even though the beans do not smell or taste 'bad'[10] (though this should not be a problem if the food reaches boiling temperature and stays there for some time).

Fermentation is used in some parts of Africa to improve the nutritional value of beans by removing toxins. Inexpensive fermentation improves the nutritional impact of flour from dry beans and improves digestibility, according to research co-authored by Emire Shimelis, from the Food Engineering Program at Addis Ababa University. Beans are a major source of dietary protein in Kenya, Malawi, Tanzania, Uganda and Zambia.[11]

Beans have significant amounts of fiber and soluble fiber, with one cup of cooked beans providing between nine and 13 grams of fiber.[12] Soluble fiber can help lower blood cholesterol.[13] Beans are also high in protein, complex carbohydrates, folate, and iron.[12] 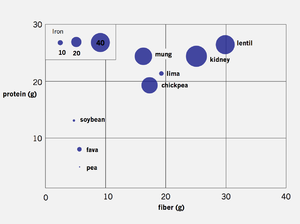 This figure shows the grams of fiber and protein per 100g serving of each legume. The size of the circle is proportional to its iron content. From this view, lentil and kidney beans are by far the healthiest while soybeans and peas have the least nutrients per serving.

Many edible beans, including broad beans and soybeans, contain oligosaccharides (particularly raffinose and stachyose), a type of sugar molecule also found in cabbage. An anti-oligosaccharide enzyme is necessary to properly digest these sugar molecules. As a normal human digestive tract does not contain any anti-oligosaccharide enzymes, consumed oligosaccharides are typically digested by bacteria in the large intestine. This digestion process produces flatulence-causing gases as a byproduct.[14][15] Since sugar dissolves in water, another method of reducing flatulence associated with eating beans is to drain the water in which the beans have been cooked.

Some species of mold produce alpha-galactosidase, an anti-oligosaccharide enzyme, which humans can take to facilitate digestion of oligosaccharides in the small intestine. This enzyme, currently sold in the United States under the brand-names Beano and Gas-X Prevention, can be added to food or consumed separately. In many cuisines beans are cooked along with natural carminatives such as anise seeds, coriander seeds and cumin[citation needed].

One effective strategy is to soak beans in alkaline (baking soda) water overnight before rinsing thoroughly[citation needed]. Sometimes vinegar is added, but only after the beans are cooked as vinegar interferes with the beans' softening. 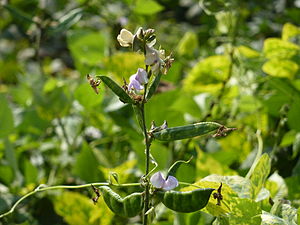 The world leader in production of dry beans is Burma, followed by India and Brazil. In Africa, the most important producer is Tanzania.