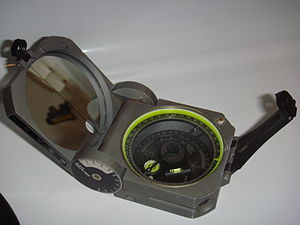 A standard Brunton Geo compass, used commonly by geologists and surveyors to obtain a bearing in the field.

"Bearing" is a term used in navigation to refer, depending on the context, to either (A) the direction of motion, or, (B) the direction of a distant object relative to the current course (or the "change" in course that would be needed to get to that distant object), or (C), the degrees away from North of a distant point relative to the current point.

A bearing can be taken on another vessel to aid piloting. If the two vessels are traveling toward each other and the relative bearing remains the same over time, there is likelihood of collision and action needs to be taken by one or both vessels to prevent this.

A bearing can be taken to a fixed or moving object in order to target it with gunfire or missiles. This is mainly used by ground troops when using an air-strike on the target.

Types of bearings include:

A grid bearing is measured in relation to the fixed horizontal reference plane of grid north, that is, using the direction northwards along the grid lines of the map projection as a reference point, while a compass bearing, as in vehicle or marine navigation, is measured in relation to the magnetic compass of the navigator's vehicle or vessel (if aboard ship). It should be very close to the magnetic bearing. The difference between a magnetic bearing and a compass bearing is the deviation caused to the compass by ferrous metals and local magnetic fields generated by any variety of vehicle or shipboard sources (steel vehicle bodies/frames or vessel hulls, ignition systems, etc.)

A relative bearing is one in which the reference direction is straight ahead, where the bearing is measured relative to the direction the navigator is facing (on land) or in relation to the vessel's bow (aboard ship). 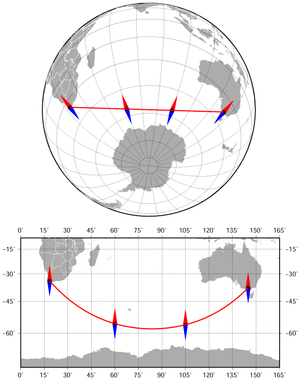 The bearing between Cape Town and Melbourne along the geodesic (the shortest route) changes from 141° to 42°. Azimuthal orthographic projection and Miller cylindrical projection.

There are several methods used to measure navigation bearings:

If navigating by gyrocompass, the reference direction is true north, in which case the terms true bearing and geodetic bearing are used. In stellar navigation, the reference diLatitude circles in red.rection is that of the North Star, Polaris. Generalizing this to two angular dimensions, a bearing is the combination of antenna azimuth and elevation required to point (aim) an antenna in a given direction. The bearing for geostationary satellites is constant. The bearing for polar-orbiting satellites varies continuously. [[

are near the North Pole and facing each other. Latitude circles are shown in red. A is facing East but B is not facing West. If B were to look West, she would see a bear eyeing her as his next meal. Only on the Equator is it true that if A faces East and B faces West, that they can face each other. Nowhere else.]]Moving from A to B along a great circle can be considered as always going in the same direction (the direction of B), but not in the sense of keeping the same bearing, which applies when following a rhumb line. Accordingly, the direction at A of B, expressed as a bearing, is not in general the opposite of the direction at B of A (when traveling on the great circle formed by A and B). For example, assume A and B in the northern hemisphere have the same latitude, and at A the direction to B is eastnortheast. Then going from A to B, one arrives at B with the direction eastsoutheast, and conversely, the direction at B of A is westnorthwest.