In acoustics, a beat is an interference pattern between two sounds of slightly different frequencies, perceived as a periodic variation in volume whose rate is the difference of the two frequencies.

When tuning instruments that can produce sustained tones, beats can readily be recognized. Tuning two tones to a unison will present a peculiar effect: when the two tones are close in pitch but not identical, the difference in frequency generates the beating. The volume varies like in a tremolo as the sounds alternately interfere constructively and destructively. As the two tones gradually approach unison, the beating slows down and may become so slow as to be imperceptible.

Mathematics and physics of beat tones

The sum (blue) of two sine waves (red, green) is shown as one of the waves increases in frequency. The two waves are initially identical, then the frequency of the green wave is gradually increased by 25%. Constructive and destructive interference can be seen.

This phenomenon is best known in acoustics or music, though it can be found in any linear system: "According to the law of superposition, two tones sounding simultaneously are superimposed in a very simple way: one adds their amplitudes".[1] If a graph is drawn to show the function corresponding to the total sound of two strings, it can be seen that maxima and minima are no longer constant as when a pure note is played, but change over time: when the two waves are nearly 180 degrees out of phase the maxima of one wave cancel the minima of the other, whereas when they are nearly in phase their maxima sum up, raising the perceived volume.

It can be proven (see List of trigonometric identities) that the envelope of the maxima and minima form a wave whose frequency is half the difference between the frequencies of the two original waves. Consider two sine waves of unit amplitude:

If the two original frequencies are quite close (for example, a difference of approximately twelve hertz[3]), the frequency of the cosine of the right side of the expression above, that is (f1−f2)/2, is often too low to be perceived as an audible tone or pitch. Instead, it is perceived as a periodic variation in the amplitude of the first term in the expression above. It can be said that the lower frequency cosine term is an envelope for the higher frequency one, ie that its amplitude is modulated. The frequency of the modulation is (f1 + f2)/2, that is, the average of the two frequencies. It can be noted that every second burst in the modulation pattern is inverted. Each peak is replaced by a trough and vice versa. However, because the human ear is not sensitive to the phase of a sound, only its amplitude or intensity, only the magnitude of the envelope is heard. Therefore, subjectively, the frequency of the envelope seems to have twice the frequency of the modulating cosine, which means the audible beat frequency is:

This can be seen on the diagram on the right. 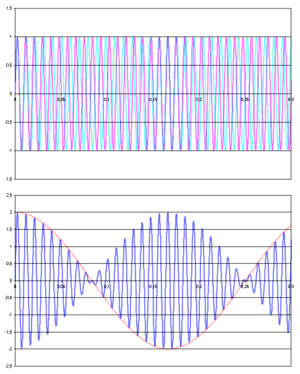 A physical interpretation is that when

equals one, the two waves are in phase and they interfere constructively. When it is zero, they are out of phase and interfere destructively. Beats occur also in more complex sounds, or in sounds of different volumes, though calculating them mathematically is not so easy.

Beating can also be heard between notes that are near to, but not exactly, a harmonic interval, due to some harmonic of the first note beating with a harmonic of the second note. For example, in the case of perfect fifth, the third harmonic (i.e. second overtone) of the bass note beats with the second harmonic (first overtone) of the other note. As well as with out-of tune notes, this can also happen with some correctly tuned equal temperament intervals, because of the differences between them and the corresponding just intonation intervals: see Harmonic series (music)#Harmonics and tuning.

Musicians commonly use interference beats to objectively check tuning at the unison, perfect fifth, or other simple harmonic intervals.[5] Piano and organ tuners even use a method involving counting beats, aiming at a particular number for a specific interval.

The composer Alvin Lucier has written many pieces that feature interference beats as their main focus. Italian composer Giacinto Scelsi, whose style is grounded on microtonal oscillations of unisons, extensively explored the textural effects of interference beats, particularly in his late works such as the violin solos Xnoybis (1964) and L'âme ailée / L'âme ouverte (1973), which feature them prominently (note that Scelsi treated and notated each string of the instrument as a separate part, so that his violin solos are effectively quartets of one-strings, where different strings of the violin may be simultaneously playing the same note with microtonal shifts, so that the interference patterns are generated). Composer Phill Niblock's music is entirely based on beating caused by microtonal differences.

Binaural beats are heard when the right ear listens to a slightly different tone than the left ear. Here, the tones do not interfere physically, but are summed by the brain in the olivary nucleus. This effect is related to the brain's ability to locate sounds in three dimensions.