Daughter of Sancho IV and of María de Molina,[6][7] Infanta Beatrice had six siblings, including King Ferdinand IV of Castile and Queen Isabella, wife of King James II of Aragon, and later duchess as the wife of John III, Duke of Brittany.[7]

On 13 September 1297, when Beatrice was only four years old, the bilateral agreement, known as the Treaty of Alcañices, was signed between Castile and Portugal, putting an end to the hostilities between both kingdoms and establishing the definitive borders. The treaty was signed by Queen María de Molina, as the regent of Castile on behalf of her son, Ferdinand IV, who was still a minor, and King Denis of Portugal. To reinforce the peace, the agreement included clauses arranging the marriages of King Ferdinand and Constance of Portugal and that of her brother, Afonso, with Beatrice; that is, the marriage of two siblings, infantes of Portugal, with two other siblings, infantes of Castile.[7][8][9][lower-alpha 1]

Beatrice abandoned Castile in the same year and moved to the neighboring kingdom where she was raised in the court of King Denis together with her future spouse, Infante Afonso, who at that time was about six years old.[12] Her future father-in-law "had inherited from his grandfather, Alfonso X of Castile, a love of letters, literature, Portuguese poetry, and the art of the troubadours" and Beatrice grew up in this refined environment.[13] Two of the Portuguese king's illegitimate sons, both important figures in the kingdom's cultural panorama, were also at the court: Pedro Afonso, Count of Barcelos, a poet and troubadour and the author of Crónica Geral de Espanha and the Livro de Linhagens; and, Afonso Sanches, the favorite son of King Denis and a celebrated troubadour.[14] 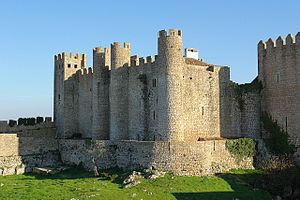 Óbidos castle, given to Beatrice by her son Peter I of Portugal

After the signing of the Treaty of Alcañices and upon their return to Portugal, King Denis gave his future daughter-in-law the Carta de Arras (wedding tokens) which included the señoríos of Évora, Vila Viçosa, Vila Real and Vila Nova de Gaia which generated an annual income of more than 6000 pounds of the old Portuguese currency.[14][12] After the marriage, these estates were increased. In 1321, her husband, who had not ascended to the throne yet, gave her Viana do Alentejo; in 1325, he gave her other properties in Santarém; in 1337, properties in Atalaia; in 1341, a manor house in Alenquer; in 1350, the prior of the Monastery of San Vicente de Fora gave her Melide, a manor house in Sintra; and later, in 1357, her son, King Peter, gave her more estates which included Óbidos, Atouguia, Torres Novas, Ourém, Porto de Mós, and Chilheiros.[15]

The marriage was celebrated in Lisbon on 12 September 1309.[6] [3] Before the marriage could take place, a papal dispensation was required since Afonso was a great-grandson of King Alfonso X of Castile through his illegitimate daughter, Beatrice of Castile, and Beatrice, betrothed to Afonso, was a granddaughter of the same Castilian king. In 1301, Pope Boniface VIII issued the papal bull authorizing the marriage, but since both were underage, it was postponed until 1309 when Afonso was eighteen years old and Beatrice had turned sixteen.[16][17] It was a fertile and apparently happy marriage. Afonso broke the tradition of previous kings and did not have any children out of wedlock.[lower-alpha 2][lower-alpha 3][lower-alpha 4] Four out of the seven children born of this marriage died in their infancy.[17]

Like her mother-in-law, Elizabeth of Aragon, who had raised her as a child, during her marriage Beatrice played a relevant role in the affairs of the kingdom. and was "the first foreign-born queen who was perfectly versed in the language and customs of Portugal which facilitated her role as a mediator of conflicts".[20] She discreetly supported her husband when he confronted his father on account of his half-brother, Afonso Sanches. In 1325 after the death of King Denis, Afonso "who had not forgotten former hatreds", demanded to be acclaimed king by the court and was responsible for having his half brother João Afonso killed, and his great rival, his other bastard brother, Afonso Sanches, banished to Castile".[21]

When her husband and her son-in-law King Alfonso XI of Castile fought in the war that took place in 1336–1339, Beatrice crossed the border and went to Badajoz to meet the Castilian king to try to reach an agreement that would bring peace to both kingdoms, although her efforts proved to be fruitless.[22] She sent her ambassadors in 1338 to the court of King Alfonso IV of Aragon to strengthen the alliance between both kingdoms which had been weakened when her son, the future King Peter I of Portugal, refused to marry Blanche, a niece of the Aragonese king because of her proven "mental weakness (...) and her incapacity for marriage".[22]

Queen Beatrice and Guilherme de la Garde, Archbishop of Braga, acted as mediators in the quarrel, which lasted almost one year and posed the threat of another civil war in the Kingdom of Portugal following the assassination of Inés de Castro,[16] and in 1355, father and son reached an agreement.[22]

On the religious front, she founded a hospital in 1329 in Lisbon and later, with her husband, the Hospital da Sé to treat twenty-four poor people of both sexes, providing the institution with all that was required for its day-to-day maintenance.[23] In her last wills and codicil, she left many properties and sums for religious establishments, particularly for the Dominican and Franciscan orders, and asked to be buried wearing the simple robe of the latter order.[24][2]

Beatrice and Alfonso IV were the parents of the following infantes: 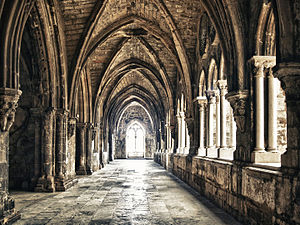 Queen Beatrice executed three wills and one codicil.[34] She died in Lisbon when she was 66 years old and was buried at Lisbon Cathedral next to her husband as she had stipulated in her will.[2] While the definitive tombs were being built, the royal couple was originally buried at the choir of the church and it was not until the reign of King John I that their remains were transferred to the new sepulchers in the main chapel of the cathedral.[35] These sepulchers were destroyed during the 1755 Lisbon earthquake and were replaced in the 18th-century. The Livros do Cartóiro da Sé (Charters of the Cathedral) written between 1710 and 1716, describe the burial of Queen Beatrice, very similar to that of her husband, with an engraving that read: Beatriz Portugaliae Regina / Affonsi Quarti Uxor.(Beatrice Queen of Portugal, wife of Afonso IV).[36]