From Infogalactic: the planetary knowledge core
Jump to: navigation, search
Not to be confused with Beaufort, South Carolina or Beaufort County, North Carolina.

Beaufort (/ˈboʊfərt/ BOH-fərt)[3] is a town in and the county seat of Carteret County, North Carolina, United States.[4] Established in 1709, Beaufort is the third-oldest town in North Carolina (after Bath and Edenton).[5][6] On February 1, 2012, Beaufort was ranked as "America's Coolest Small Town" by readers of Budget Travel Magazine.[7]

The population was 4,039 at the 2010 census.[8] It is sometimes confused with a city of the same name in South Carolina; the two are distinguished by different pronunciations.[3]

Beaufort is located in North Carolina's "Inner Banks" region. The town is home to the North Carolina Maritime Museum, the Duke University Marine Laboratory (Nicholas School of the Environment), and the National Oceanic and Atmospheric Administration (NOAA) Center for Coastal Fisheries and Habitat Research. It is also the location of the Rachel Carson Coastal Reserve.[9] The Nicholas Sparks novel and movie A Walk to Remember is set in Beaufort.

The Beaufort Historic District, Carteret County Home, Gibbs House, Jacob Henry House, and Old Burying Ground are listed on the National Register of Historic Places.[10] In June of 1718 Blackbeard the pirate ran his flagship, the Queen Anne's Revenge, aground near present day Beaufort Inlet, NC.[11] The Queen Anne's Revenge was added to the National Register of Historic Places in 2004 with the reference number 04000148. Thirty two years later, in August of 1750, at least three Spanish merchantmen ran aground in North Carolina during a hurricane. One of the three, the El Salvador, sank near Cape Lookout. [12]

Beaufort is located south of the center of Carteret County at Lua error in Module:Coordinates at line 668: callParserFunction: function "#coordinates" was not found. (34.7207, −76.6525).[13] It is located on Beaufort Inlet, a channel leading south to the Atlantic Ocean. To the west is the tidal Newport River, separating the town from Morehead City. To the east is the unincorporated neighborhood of Lenoxville, extending to the North River, another tidal river.

U.S. Route 70 passes through Beaufort, leading west across the Newport River to Morehead City and northeast 31 miles (50 km) to its end in the town of Atlantic. 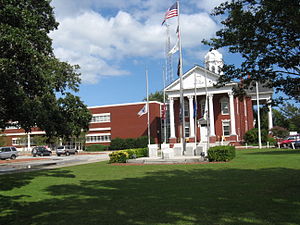 There were 1,780 households out of which 21.9% had children under the age of 18 living with them, 40.3% were married couples living together, 15.3% had a female householder with no husband present, and 41.1% were non-families. 35.5% of all households were made up of individuals and 15.6% had someone living alone who was 65 years of age or older. The average household size was 2.07 and the average family size was 2.65. 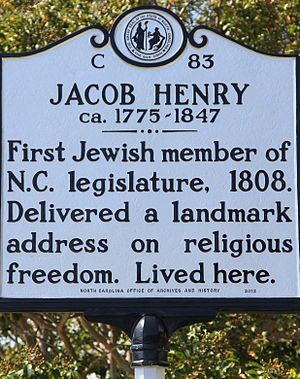 Plaque in front of the Jacob Henry House, 229 Front Street 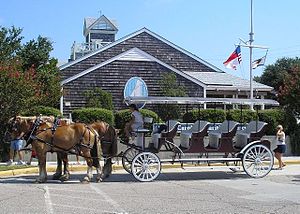 According to Beaufort Sister Cities, Inc., the city of Beaufort has 19 sister cities:[20]