From Infogalactic: the planetary knowledge core
Jump to: navigation, search
For other uses, see Beckton (disambiguation).

Beckton is an urban neighbourhood in east London, England and part of the London Borough of Newham. It is located 8 miles (12.9 km) east of Charing Cross. It was unpopulated marshland adjacent to the River Thames until the development of major industrial infrastructure to support the growing metropolis of London was built in the 19th century. Housing was created in Beckton for workers of the gas and sewage works. Between 1981 and 1995 it was within the London Docklands Development Corporation area which caused the population to increase as new homes were built and the Docklands Light Railway was constructed.

Beckton is named after Simon Adams Beck, the governor of the Gas Light and Coke Company when work building Beckton Gas Works began in November 1868.

Beckton was located primarily in the parish of East Ham. It stretched into the ancient parish of Woolwich, which included land on the north bank of the Thames and the parish of Barking that included land to the west of the Roding. The parish boundary was also a county boundary, with Barking and East Ham in Essex and North Woolwich in Kent. In 1889 Woolwich became part of the County of London. In 1914 East Ham became a county borough, essentially a county in its own right. In 1965 the London Borough of Newham was created and all three sections of Beckton became part of the new borough in Greater London. Beckton was within the London Docklands Development Corporation area from 1981 to 1995.

Sewage treatment works were first established in 1864 as part of Joseph Bazalgette's scheme to remove sewage (and hence reduce disease) from London by creating two huge sewer pipes from the capital, one on each side of the Thames and known as the Southern and Northern Outfall Sewers. The Beckton sewage works, at the end of the northern outfall, is the fourth largest in the world and Europe's largest and is now managed by Thames Water. The outfall sewer has been landscaped and now also serves as the Greenway cycle track through east London. Originally sewage was pumped untreated into the Thames, and this contributed to the high death toll in the 1878 Princess Alice disaster, when over 600 died in Britain's worst inshore shipping tragedy. The site was mooted in 2005 as the location for a desalination plant, but the proposal was rejected by Mayor Ken Livingstone as environmentally unacceptable. The scheme has been resurrected by the new mayor, Boris Johnson, as part of a deal with Thames Water to reduce delays in fixing roadworks throughout London.

Situated north and east of the Royal Docks, the area was formerly heavily industrialised, and was the location of Beckton Gas Works, the largest gasworks in Europe, which served the capital. An adjacent by-products works also produced a wide variety of products including ink, dyes, mothballs, and fertilisers, all by-products of the process of turning coal to coke in the production of town gas. When Britain switched from town gas to North Sea natural gas in 1969, the gasworks closed.

An extensive toxic spoil-heap from the Gasworks was known ironically as 'Beckton Alps'. Originally running from the Northern outfall sewer south to Winsor Terrace, this was landscaped in the 1980s. Part became a 25 metres (82 ft) high Artificial ski slope for a time, opened by Diana, Princess of Wales, with a viewing platform at the summit and a Swiss-style bar at the foot. However, the site is now derelict. 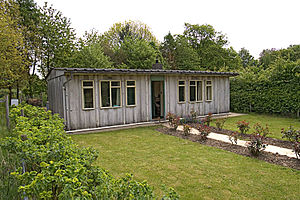 Immediately after the Second World War, large numbers of prefabs were built in Beckton, to house those made homeless by the war. The prefab-lined streets were all named after well-known generals and war heroes, but in the redevelopment of North Beckton in the 1980s, these were all swept away with the exception of Eisenhower Drive.

Containerisation during the 1960s, and the development of the docks at Tilbury, released all the land from the Thames up to the A13 which had been earmarked for a new, North Albert Dock. The original District Plan envisaged a large Council-owned estate, and major infrastructure works—including a huge drainage scheme with pumping stations—were put in place. However, following the creation of the London Docklands Development Corporation, much of the land was sold off resulting in today's blend of largely private housing.

In more recent times, industry has left the area, leaving huge areas of brownfield land, and Beckton has been redeveloped as part of the Docklands project. It now comprises mainly housing and several out-of-town shopping centres, and the architecture is mostly post-1982. Small areas of Victorian housing survive in Winsor Terrace, originally built as accommodation for Gas Light and Coke Company staff, and in the 'Nottingham' estate off Prince Regent Lane. It is served by local buses and Beckton DLR station, which acts as the terminus of the DLR's Beckton branch. The Victorian 'Cyprus' estate was rebuilt in the 1980s, but the original Cyprus public house survives (named The Ferndale, although now boarded-up, and earmarked for redevelopment, March 2008).

In the early 21st century, Beckton burgeons south and further east, towards Gallions Reach, being an essential part of the Thames Gateway. "Gallions Hotel", part of the Furlong City development by the lock that links the Royal Docks to the Thames, was formerly a rail terminus which connected with passenger ships leaving for all parts of the British Empire. Many colonial officials and their families spent their last night in Britain in the Gallions Hotel, which was mentioned by Rudyard Kipling in his novel, The Light That Failed.

Its boundaries are the A13 trunk road to the north, Barking Creek to the east, the Royal Docks to the south, and Prince Regent Lane to the west. The area around Prince Regent Lane is also known as Custom House. Modern Beckton is divided into East Beckton, Mid Beckton, North Beckton, West Beckton, South Beckton and Cyprus (named after the British capture of Cyprus from the Ottoman Empire in 1878, which occurred as the original estate was being built).

Beckton is at the western end of the London Riverside redevelopment zone of the Thames Gateway. Transport for London are planning a new bridge, the Thames Gateway Bridge, which will connect Beckton to Thamesmead on the southern bank of the River Thames.

The Gasworks were still extant—although derelict—in the early 1980s, when Stanley Kubrick's team came scouting for an area that could double for the battle scenes in his 1987 movie, Full Metal Jacket. The Gasworks rough concrete structures were painted with Vietnamese script, and then strategically dynamited so as to resemble war-torn Hue. Retail parks now cover most of the Gasworks site.

Other notable movies filmed in and around the Beckton area during the 1980s included the 1981 James Bond film, For Your Eyes Only, which featured extensive aerial views of the Gasworks in the pre-credit sequence. Beckton was also used as a location in Michael Radford's 1984 feature film adaptation of George Orwell's Nineteen Eighty-Four—the Gasworks served as the setting for Orwell's "Proletarian Zones".

Andrew Birkin's 1990 film of Ian McEwan's novel, The Cement Garden, was also filmed in Beckton and starred Charlotte Gainsbourg, who could often be seen (at the time of filming) shopping in the aisles of ASDA. In several scenes of The Cement Garden, aircraft can be heard taxiing at the nearby London City Airport. Winsor House, which served as the backdrop to the movie was later demolished and the Winsor Lodge Hotel stands there now.

In the opening minutes of the 2007 Simon Pegg film Hot Fuzz, the Tate & Lyle factory, Silvertown, and the City Airport aprons can be seen through the window blinds of Building 1000.

England and current Sunderland A.F.C. striker Jermain Defoe was born in Beckton. Defoe has said Beckton has "made him the man he is today". On 13 February 2006 Jermain Defoe scored his 100th Premier League goal against Charlton. He celebrated making a "B" sign with his hands to commemorate Beckton.[citation needed]

Kingsford Community School is a secondary school located close to Beckton DLR. It opened in September 2000, and educates full-time students from the ages of 11 to 16.