From Infogalactic: the planetary knowledge core
Jump to: navigation, search
For the stream in New Jersey, see Beden Brook. For the village in Albania, see Beden, Albania. 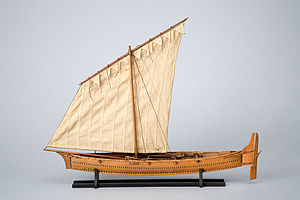 The Beden', badan, or alternate type names Beden-seyed and Beden-safar, is a fast, ancient Somali single or double-masted maritime vessel and ship, typified by its towering stern-post and powerful rudder. It is also the longest surviving sewn boat in the Horn of Africa and the Arabian Peninsula. Its shipyards predominantly lie in the northeastern Hafun region of Somalia (notably Bayla), as well as Muscat. There are 2 types of Beden ships, with one type geared towards fishing (the Beden-seyed) and the other, trading (Beden-safar). The average trading Beden-safar ship measure more than 15 m (49 ft) in length, and are significantly larger than the fishing Beden-seyed ships, which measure 6-15m (20-49 ft) on average, but both are dwarfed by a much larger trading variant called the 'uwassiye, he most common trading and voyaging ship, with some measuring up to 77+ ft. The ship is noticeable and unique in its strengthened substantial gunwale, which attached by treenail . Originally, all Beden ships were sewn with coiled coconut fibre, holding the hull planking, stem and stern-post. but Omani variants, beginning in the 20th century, began nailing instead of sewing the planks.