Bedworth United Football Club (nicknamed "the Greenbacks") is a football club based in Bedworth, Warwickshire, England, currently playing in Division One Central of the Southern Football League.

The club was first formed in 1895 but has been disbanded and re-formed on a number of occasions. The club plays its home matches at The Oval.

A third Bedworth Town club was formed in 1925 and again played in the Coventry & North Warwickshire League until 1940. The current club debuted in 1947 (again under the name Bedworth Town) and joined the Birmingham Combination where they were champions on two occasions before stepping up to the Birmingham & District League (now the West Midlands (Regional) League). In 1968 they changed to their current name, and four years later stepped up to the Southern League. They enjoyed a seven-season run in the Premier Division but were relegated in 1989 and have played in the league's second tier ever since, although divisional reorganisations have seen the name of the division in which they play change twice. Local manager Bernie Cope took over from the sacked Liam O'Neill on 7 December 2009, appointing the experienced Simon Benn as first team coach and bringing in Mark Green and Jimmy Ginnely as joint assistant managers.

Cope was replaced by 30-year-old Nuneaton Griff Manager Steve Farmer who steered the club to Promotion for the first time in its 65-year history. However following one season at the higher level, Bedworth were relegated on goal difference at the end of the 2012–13 season. Shortly afterwards the club parted company with manager Steve Farmer after two years in charge of the club.

The club then appointed former Banbury United and Daventry Town boss Ady Fuller as Farmer's successor in May 2013. [2] 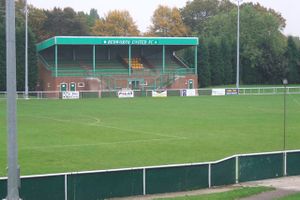 The club's home ground, The Oval

Fuller was then replaced by Stuart Storer after leaving his position as manager in 2013.

In their first season back at Division One Central level, Bedworth were promoted via the play-offs with a 2-0 win against Barton Rovers in the final on 4 May 2015.

This is 5 recent Bedworth United seasons.