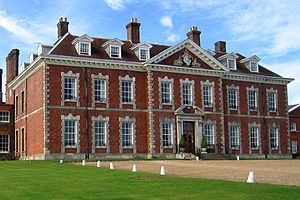 Ralph de Tony held this site, in the manor of Flamstead, as recorded in the Domesday Book of 1086.[1] As King of England, William the Conqueror would have expected this new Lord of the Manor to protect St Albans Abbey and its pilgrims. Ralph de Tony's grandson Roger IV de Toesny then founded a Benedictine nunnery, St Giles in the Wood Priory, Flamstead, in the middle of the 12th century.[2] The Dissolution of the Monasteries resulted in the destruction of the nunnery of St Giles in 1537.

The Manor House on the site was used frequently by Henry VIII and later by Edward VI. In 1537, the site was let to Sir John Tregonwell by Henry VIII. Shortly afterwards, however, the king granted it by Letters Patent dated September 30, 1539, to Richard Page and Dame Elizabeth.[3]

The property subsequently passed first to George Ferrers, and then in 1628 to Thomas Saunders of Long Marston. In 1698 his great grand-daughter Anne Saunders married Sir Edward Sebright, who belonged to a wealthy Worcestershire family, establishing a family connection for the next two and a half centuries.[4] One of six children, only Anne herself survived childhood. A monument in St Leonard's Church, Flamstead, is a memorial attributed to William Stanton (c.1690) to the early death of her brothers and sisters. Edward Sebright moved from Worcestershire to his bride’s home in Hertfordshire, and set about transforming the Tudor building that he found there.

File:BeechwoodPark18th.jpg
Beechwood Park in the early 18th century shortly after the completion of the new facade.

Further changes (e.g. the addition of much of the façade and of the two wings) were made in the 18th century; a Library was added at the start of the 19th century, and the courtyard covered over in 1854 (it is now the Great Hall). In 1880 the tenant was Mr W.B. Greenfield, who established there in that year one of the three leading herds of pedigree Aberdeen Angus Cattle in England.[5] In 1908 he was the tenant of Haynes Park, Bedfordshire.[6]

The Sebrights fell on hard times after World War I, and eventually relinquished the estate. The Second World War brought changes to Beechwood. Firstly the Sebright family, with the requisitioning of the house by the government, moved into a smaller house that they owned, nearby. The main house became the headquarters for Spillers Foods, which had evacuated from London. An airfield was built in the grounds to land damaged or obsolete planes. Specially constructed hangars were used to house these planes and care was taken to camouflage the strip and the hangars. At the end of the war the house first became a girls' school, which eventually closed in 1961 due to lack of funds.[7] A new coeducational preparatory school was opened in 1964 which continues to this day.[8]