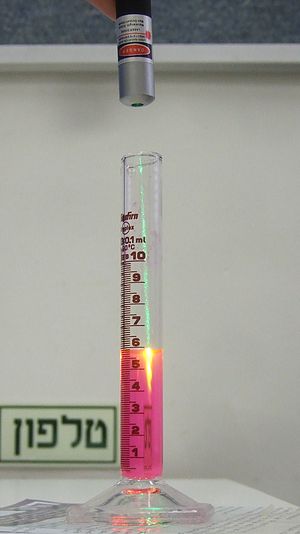 An example of Beer–Lambert law: green laser light in a solution of Rhodamine 6B. The beam radiant power becomes weaker as it passes through solution

The Beer–Lambert law, also known as Beer's law, the Lambert–Beer law, or the Beer–Lambert–Bouguer law relates the attenuation of light to the properties of the material through which the light is traveling. The law is commonly applied to chemical analysis measurements and used in understanding attenuation in physical optics, for photons, neutrons or rarefied gases. In mathematical physics, this law arises as a solution of the BGK equation.

The law was discovered by Pierre Bouguer before 1729.[1] It is often attributed to Johann Heinrich Lambert, who cited Bouguer's Essai d'optique sur la gradation de la lumière (Claude Jombert, Paris, 1729)—and even quoted from it—in his Photometria in 1760.[2] Lambert's law stated that absorbance of a material sample is directly proportional to its thickness (path length). Much later, August Beer discovered another attenuation relation in 1852. Beer's law stated that absorbance is proportional to the concentrations of the attenuating species in the material sample in 1852.[3] The modern derivation of the Beer–Lambert law combines the two laws and correlates the absorbance to both the concentrations of the attenuating species as well as the thickness of the material sample.[4]

By definition, the transmittance of material sample is related to its optical depth τ and to its absorbance A as

The Beer–Lambert law states that, for N attenuating species in the material sample,

Attenuation cross section and molar attenuation coefficient are related by

and number density and amount concentration by

where NA is the Avogadro constant.

In case of uniform attenuation, these relations become[5]

The law tends to break down at very high concentrations, especially if the material is highly scattering. If the radiation is especially intense, nonlinear optical processes can also cause variances. The main reason, however, is the following. At high concentrations, the molecules are closer to each other and begin to interact with each other. This interaction will change several properties of the molecule, and thus will change the attenuation.

respectively, by definition of attenuation cross section and molar attenuation coefficient. Then the Beer–Lambert law becomes

In case of uniform attenuation, these relations become

Assume that a beam of light enters a material sample. Define z as an axis parallel to the direction of the beam. Divide the material sample into thin slices, perpendicular to the beam of light, with thickness dz sufficiently small that one particle in a slice cannot obscure another particle in the same slice when viewed along the z direction. The radiant flux of the light that emerges from a slice is reduced, compared to that of the light that entered, by dΦe(z) = −μ(z)Φe(z) dz, where μ is the (Napierian) attenuation coefficient, which yields the following first-order linear ODE:

The attenuation is caused by the photons that did not make it to the other side of the slice because of scattering or absorption. The solution to this differential equation is obtained by multiplying the integrating factor

which simplifies due to the product rule (applied backwards) to

Integrating both sides and solving for Φe for a material of real thickness ℓ, with the incident radiant flux upon the slice Φei = Φe(0) and the transmitted radiant flux Φet = Φe(ℓ ) gives

Under certain conditions Beer–Lambert law fails to maintain a linear relationship between attenuation and concentration of analyte.[6] These deviations are classified into three categories:

There are at least six conditions that need to be fulfilled in order for Beer–Lambert law to be valid. These are:

If any of these conditions are not fulfilled, there will be deviations from Beer–Lambert law.

Beer–Lambert law can be applied to the analysis of a mixture by spectrophotometry, without the need for extensive pre-processing of the sample. An example is the determination of bilirubin in blood plasma samples. The spectrum of pure bilirubin is known, so the molar attenuation coefficient ε is known. Measurements of decadic attenuation coefficient μ10 are made at one wavelength λ that is nearly unique for bilirubin and at a second wavelength in order to correct for possible interferences. The amount concentration c is then given by

For a more complicated example, consider a mixture in solution containing two species at amount concentrations c1 and c2. The decadic attenuation coefficient at any wavelength λ is, given by

Therefore, measurements at two wavelengths yields two equations in two unknowns and will suffice to determine the amount concentrations c1 and c2 as long as the molar attenuation coefficient of the two components, ε1 and ε2 are known at both wavelengths. This two system equation can be solved using Cramer's rule. In practice it is better to use linear least squares to determine the two amount concentrations from measurements made at more than two wavelengths. Mixtures containing more than two components can be analyzed in the same way, using a minimum of N wavelengths for a mixture containing N components.

The law is used widely in infra-red spectroscopy and near-infrared spectroscopy for analysis of polymer degradation and oxidation (also in biological tissue). The carbonyl group attenuation at about 6 micrometres can be detected quite easily, and degree of oxidation of the polymer calculated.

Beer–Lambert law in the atmosphere

This law is also applied to describe the attenuation of solar or stellar radiation as it travels through the atmosphere. In this case, there is scattering of radiation as well as absorption. The optical depth for a slant path is τ′ = mτ, where τ refers to a vertical path, m is called the relative airmass, and for a plane-parallel atmosphere it is determined as m = sec θ where θ is the zenith angle corresponding to the given path. The Beer–Lambert law for the atmosphere is usually written

where each τx is the optical depth whose subscript identifies the source of the absorption or scattering it describes:

m is the optical mass or airmass factor, a term approximately equal (for small and moderate values of θ) to 1/cos θ, where θ is the observed object's zenith angle (the angle measured from the direction perpendicular to the Earth's surface at the observation site). This equation can be used to retrieve τa, the aerosol optical thickness, which is necessary for the correction of satellite images and also important in accounting for the role of aerosols in climate.