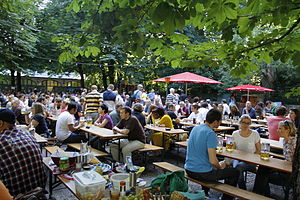 A beer garden (a loan translation from the German Biergarten) is an outdoor area in which beer and local food are served, typically at shared tables. Common entertainments include music, song, and games, enjoyed in an atmosphere of Gemütlichkeit.[1]

Beer gardens originated in Munich, the capital of the German state of Bavaria, in the 19th century, and remain common in Southern Germany. They are usually attached to a beer hall, pub, or restaurant,[2] with a distinction being made between a Wirtsgarten where only food sold by the venue is allowed[3] and a traditional Biergarten where patrons may also bring their own.

Beer garden popularity is increasing worldwide in the 21st century.[1] 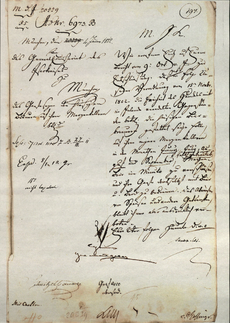 Decree by King Maximilian I, Joseph von Bayern, dated January 4, 1812, allowing Munich brewers to serve beer from their cooling cellars, but no food other than bread

It is unknown which Munich brewery opened the first Bavarian Biergärten as the concept evolved over time, but it was likely one of Munich's big six: Löwenbräu, Hofbräuhaus, Augustinerbräu, Paulaner, Hacker-Pschorr and Spaten.[1] What is known is that they developed in Germany in the then kingdom in the 19th century.

Seasonal limitations on when beer could be brewed were already in the Bavarian brewing regulations by 1539; in 1553, Albert V decreed a period from 29 September, the feast of St. Michael, to 23 April, the feast of Saint George, for its production. The cool seasons were chosen to minimize the risk of fire when boiling mashed grain into wort. Numerous conflagrations had occurred, resulting in the prohibition of brewing during the summer months. In response, large breweries dug cellars in the banks of the River Isar to keep their beer cool during storage. "Beer cellars" for consuming beer on premises naturally followed. 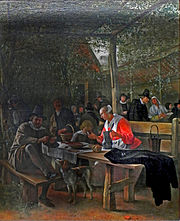 To further reduce the cellar temperature during the warm seasons, 19th century brewers[citation needed] covered the river banks with gravel and planted chestnut trees for their dense spreading canopies. Soon after that, serving cool beer in a pleasant shaded setting emerged. Simple tables and benches were set up among the trees, creating the popular "beer garden" we know today. Food service followed, aggrieving smaller breweries that found it difficult to compete. They petitioned Maximilian I to forbid it. In compromise, beer gardens allowed their patrons to bring their own food, still common practice. As a rule of thumb, beer gardens offer clothed tablesets, whose guests must buy food from the house. If you bring your own food, you must use the bare table sets. With the advent of widespread lagering in the later 19th century, beer gardens grew more popular than ever.

Maximilian's decree is no longer in force, and many beer gardens serve food, usually common Bavarian fare such as Radi (radish), Brezn (soft pretzel), Obatzda (cheese dip), halbes Hendl (half a grilled chicken), Hax'n (knuckle of pork), and Steckerlfisch (grilled fish). Equally important to the beer garden is an atmosphere of Gemütlichkeit,[1] conveying a feeling of warmth, friendliness, and belonging. Reinforced by shared tables, it is often accompanied by music, song, and fellowship among strangers.

This is so integral to beer garden culture that the Bayerische Biergartenverordnung (Bavarian beer garden ordinance) of 1999 permits traditional tree shaded venues that allow their patrons to bring their own food to close later and exceed noise limits otherwise in force.[4] Beyond this, the term Biergarten is not restricted, and anyone can call any kind of open-air restaurant by that name,[citation needed] though purists[who?] distinguish between a Wirtsgarten[3] where only the brewery's food is sold (such as the outdoor tables at the Hofbräuhaus am Platzl)[5] and a Biergarten where patrons may bring their own.

Beer gardens around the world 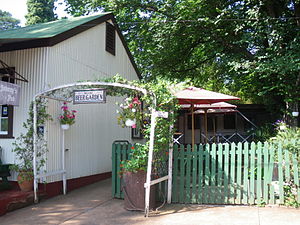 The largest traditional beer garden in the world is the Hirschgarten in Munich, which seats 8,000.[6]

Australia has many beer gardens, typically as part of a pub, or often next to sports fields.

In Austria, the beer garden is called Gastgarten (guest garden). They serve food such as ein Paar Würstel (a pair of the German Bratwurst) or Schweinebraten (German pot-roasted pork). When ordering beer, the choices are usually a Pfiff (0.2 liter), a Seidel (0.3 liter), or a Krügerl (1/2 liter).

File:Beer-garden-6696.JPG
A beer garden in Churchill Square in Edmonton, Alberta, during the "Cariwest" Caribbean festival

Canada has traditionally lacked an outdoor eating culture conducive to beer gardens. Cold weather and biting insects are part of the reason. However, with increased urbanization during the 20th century, drinking at outdoor cafes and restaurant patios became more common. Since Canadian alcohol laws in most provinces forbid drinking in unlicensed public places, beer gardens in Canada are generally a segregated area attached to an event such as a concert or festival. They are very popular at large sporting events such as the Memorial Cup in hockey. One cannot legally remove alcohol from the area or bring in outside alcohol.[7][8]

Beer gardens are still very popular in Germany. The Hirschgarten restaurant in Munich is noted for its beer garden, which is possibly the largest in the world. It has seating for over 8000 people.[9] The restaurant dates back to 1791.

In 2011, the world record for 'The worlds longest beer garden' was set in Berlin by the Berlin Beer Festival, measuring a whopping 1,820 m long.[10]

Beer gardens are popular in Japan. Many are located on the roofs of department stores and hotels.[citation needed]

In the Netherlands are several Beer Gardens located in Amsterdam, Arnhem and Rotterdam. One of the recently opened beer gardens is: Barley's Biergarten

In the UK, a beer garden is normally an outdoor area joined onto a pub. They have always been popular, particularly in summer. Often, British pubs can become locally or, in many cases, nationally renowned for having larger, more beautiful, or quirky beer gardens. No fixed ideal exists of what constitutes a beer garden, and each pub makes the most of its individual situation. Consequently, furniture can range from logs to covered, heated dining tables and chairs, but typically consists of wooden picnic tables. Since smoking became illegal in indoor public areas, beer gardens are often used a lot more, even during winter. They now usually have a covered area to accommodate smokers during inclement weather. 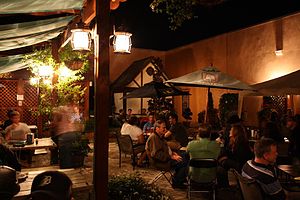 In the United States, one of the earliest, and most popular, beer gardens was Castle Garden at The Battery on the southern tip of Manhattan Island in New York. It had previously been a fort, and subsequently became a theater, the first immigration station (predating Ellis Island), a very popular public aquarium, and finally a national monument.

Scholz Garten is the oldest operating business in Austin, Texas. It has been at the same location since German immigrant August Scholz opened it in 1866. In addition to an indoor restaurant and outdoor beer garden, it has a six-lane bowling alley.

After 1914, the number of Beer gardens in the United States declined heavily due to anti-German sentiment, but the last decades have seen a rise of new establishments.

In the US, historically, beer gardens offered many pastimes besides just beer drinking. Some spots hosted shooting galleries, bowling alleys, and live classical music.[11] People could come for entertainment and events,[12] even if they did not want to partake in the drinking. Today, many beer gardens have outdoor games, as well as board games, available to patrons.

American liquor laws condition how beer gardens can operate in each state. For example, Washington alcohol laws require organizers to apply for and receive a liquor license, servers to be over 21 years old, alcohol only to be consumed in the designated venue, the area to be fenced, and staff to "cut off" obviously drunk patrons. Additional laws restrict alcohol-related signage associated with the event and prevent smoking in the beer garden.[13]