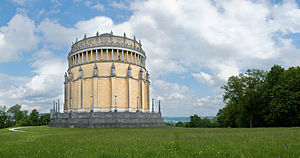 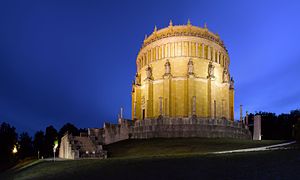 The Befreiungshalle ("Hall of Liberation", German: [bəˈfʀaɪ̯ʊŋsˌhalə]) is a Neoclassical monument on the hill Michelsberg above the city of Kelheim in Bavaria, Germany. It stands upstream of Regensburg on the river Danube at the confluence of the Danube and the Altmühl, i.e. the Rhine-Main-Danube Canal. It was commissioned by King Ludwig I of Bavaria to commemorate the victory over Napoleon in the Befreiungskriege of 1813-15. 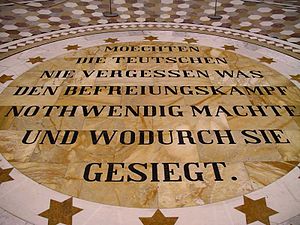 King Ludwig I of Bavaria ordered the Befreiungshalle to be built in order to commemorate the victories against Napoleon during the Wars of Liberation that lasted from 1813 to 1815.

The construction was started in 1842 by Friedrich von Gärtner in a mixture of Neoclassical and Christian styles. At the behest of the King, Leo von Klenze altered the plans and completed the building in 1863. The ceremonial opening took place on 18 October 1863 – the 50th anniversary of the Battle of Nations (Völkerschlacht) near Leipzig.

The following dictum by King Ludwig I, embedded into the marble floor, commemorates the occasion of the construction of the Befreiungshalle:

(May
the Germans
never forget what
made necessary
the Struggle for Freedom
and by what means they
won.)

This inscription of dedication is to be found above the ornamented door frame of the entrance portal:

(To the German
Liberation Fighters
Ludwig I
King of Bavaria)

For the celebration of the first stone laying on 19 October Ludwig I had written a poem dedicated to the soldiers who had fought in the Napoleonic Wars. Joseph Hartmann Stutz had set it to music:[1]