From Infogalactic: the planetary knowledge core
Jump to: navigation, search
For other uses, see Behemoth (disambiguation). 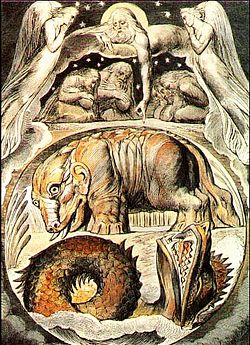 Behemoth and Leviathan, watercolour by William Blake from his Illustrations of the Book of Job.

Behemoth (/bᵻˈhiːməθ/ or /ˈbiː.əməθ/, also /ˈbeɪ.əmɔːθ/; Hebrew: בהמות‎, behemoth (modern: behemot)) is a beast mentioned in Job 40:15–24. Suggested identities range from a mythological creature to an elephant, hippopotamus, rhinoceros or buffalo.[1] Some Young Earth creationists believe it to be a description of a dinosaur. Metaphorically, the name has come to be used for any extremely large or powerful entity.

Job 40:15–24 describes Behemoth, and then the sea-monster Leviathan, to demonstrate to Job the futility of questioning God, who alone has created these beings and who alone can capture them.[2] Both beasts are chaos monsters destroyed by the deity at the time of creation, although such a conflict is not found in the Genesis creation narrative.[3]

Leviathan is identified figuratively with both the primeval sea (Job 3:8, Psalms 74:13) and in apocalyptic literature – describing the end-time – as that adversary, the Devil, from before creation who will finally be defeated. In the divine speeches in Job, Behemoth and Leviathan may both be seen as composite and mythical creatures with enormous strength, which humans like Job could not hope to control. But both are reduced to the status of divine pets, with rings through their noses and Leviathan on a leash.[1][4]

15 Behold now behemoth, which I made with thee; he eateth grass as an ox. 16 Lo now, his strength is in his loins, and his force is in the navel of his belly. 17 He moveth his tail like a cedar: the sinews of his stones are wrapped together. 18 His bones are as strong pieces of brass; his bones are like bars of iron. 19 He is the chief of the ways of God: he that made him can make his sword to approach unto him. 20 Surely the mountains bring him forth food, where all the beasts of the field play. 21 He lieth under the shady trees, in the covert of the reed, and fens. 22 The shady trees cover him with their shadow; the willows of the brook compass him about. 23 Behold, he drinketh up a river, and hasteth not: he trusteth that he can draw up Jordan into his mouth. 24 He taketh it with his eyes: his nose pierceth through snares.

In Jewish apocrypha and pseudepigrapha such as the 2nd century BCE Book of Enoch, Behemoth is the primal unconquerable monster of the land, as Leviathan is the primal monster of the waters of the sea and Ziz the primordial monster of the sky. According to this text Leviathan lives in "the Abyss", while Behemoth the land-monster lives in an invisible desert east of the Garden of Eden (1 Enoch 60:7–8). A Jewish rabbinic legend describes a great battle which will take place between them at the end of time: "...they will interlock with one another and engage in combat, with his horns the Behemoth will gore with strength, the fish [Leviathan] will leap to meet him with his fins, with power. Their Creator will approach them with his mighty sword [and slay them both]." Then, "from the beautiful skin of the Leviathan, God will construct canopies to shelter the righteous, who will eat the meat of the Behemoth and the Leviathan amid great joy and merriment." (Artscroll siddur, p. 719).

In the Haggadah, Behemoth's strength reaches its peak on the summer solstice of every solar year (around 21 June). At this time of year, Behemoth lets out a loud roar that makes all animals tremble with fear, and thus renders them less ferocious for a whole year. As a result, weak animals live in safety away from the outreach of wild animals. This mythical phenomenon is shown as an example of divine mercy and goodness. Without Behemoth's roar, traditions narrate, animals would grow more wild and ferocious, and hence go around butchering each other and humans.[5] 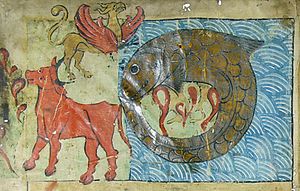 File:Dictionnaire Infernal - Behemoth.jpg Since the 17th century CE there have been many attempts to identify Behemoth. Some scholars have seen him as a real creature, usually the hippopotamus, occasionally the elephant, rhinoceros, or water buffalo.[2] The reference to Behemoth's "tail" that "moves like a cedar" presents a problem for most of these readings, since it cannot easily be identified with the tail of any animal. Biologist Michael Bright suggests that the reference to the cedar tree actually refers to the brush-like shape of its branches, which resemble the tails of modern elephants and hippopotamuses.[6] Some have identified the cedar as an elephant trunk, but it might instead refer to Behemoth's penis, since the Hebrew word for "move" can also mean "extend", and the second part of the verse speaks of the sinew around his "stones" (not, as in the translation provided above, his "thighs"). The Vulgate seems to endorse such a reading by using the word "testiculorum".[7] Russian-language speakers have used the cognate word бегемот (begemot) to refer to the hippopotamus from third quarter of the 18th century. (Earlier Russian-speakers used the name гиппопотам (gippopotam).)

Another opinion sees Behemoth as a product of the imagination of the author of Job, a symbol of God's power: in verse 24 he is described as having a ring ("snare") through his nose, a sign that he has been tamed by Yahweh.[1]

The Dictionnaire Infernal has depicted Behemoth as a humanoid Elephant Demon with a round belly. This depiction of Behemoth is a huge soldier of Satan that lives in Hell. Behemoth is an infernal watchman who also presides over the gluttonous banquets and feasts. It is also said[by whom?] that Behemoth has also enjoyed a certain renown for his voice where he was regarded as Hell's official demonic singer.

The 17th-century political philosopher Thomas Hobbes named the Long Parliament 'Behemoth' in his book Behemoth. It accompanies his book of political theory that draws on the lessons of English Civil War, the rather more famous Leviathan. It is also the name of a character in Mikhail Bulgakov's novel, The Master and Margarita.

The Behemoth is mentioned in The Seasons by James Thomson: "[…] behold ! in plaited mail / Behemoth rears his head." […] (Summer). The German émigré Franz Leopold Neumann entitled his 1941 book about National Socialism, Behemoth: The Structure and Practice of National Socialism.

The Behemoth is also mentioned in the opera, Nixon in China, composed by John Adams, and written by Alice Goodman. At the beginning of the first act, the chorus sings "The people are the heroes now, Behemoth pulls the peasants' plow" several times.[12]

Job 40 is an example of the use of a plural noun suffix to mean "great", rather than plural. The feminine plural Hebrew noun behemoth is also used in Joel 1:20.[citation needed]