From Infogalactic: the planetary knowledge core
Jump to: navigation, search
"Round City" redirects here. For the former plan of the Iraqi capital, see round city of Baghdad. 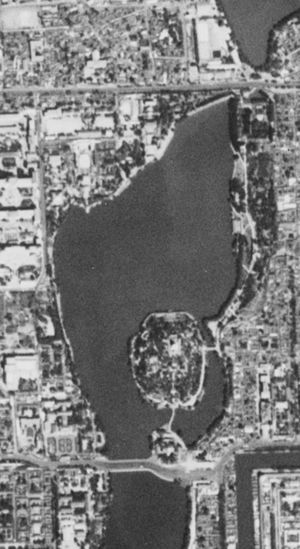 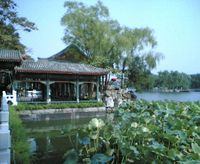 Chinese gardens can be found throughout the site 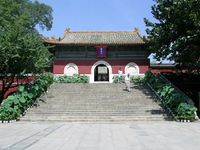 The entrance to the Chanfu Temple, located on the northern shore of the lake 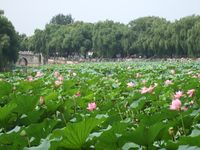 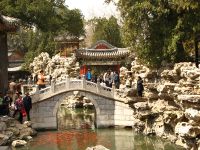 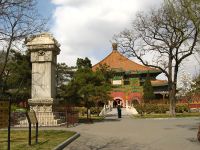 Beihai Park was an imperial garden and now a public park located to the northwest of the Forbidden City in Imperial City, Beijing. First built in the 11th century, it is among the largest of all Chinese gardens and contains numerous historically important structures, palaces, and temples. Since 1925, the place has been open to the public as a park. It is also connected at its northern end to the Shichahai.

The park has an area of more than 69 hectares (171 acres), with a lake that covers more than half of the entire park. At the center of the park is an island called Jade Flower Island (琼华岛, Qiónghuádǎo), whose highest point is 32 meters (105 ft).

Beihai literally means "Northern Sea". There are also corresponding Central (Zhonghai) and Southern (Nanhai) "Seas". These latter two are joined inside a complex of buildings known after them as Zhongnanhai; it is the home of China's paramount leaders.

The Beihai Park, as with many of Chinese imperial gardens, was built to imitate renowned scenic spots and architecture from various regions of China; the Taihu lake, the elaborate pavilions and canals in Hangzhou and Yangzhou, the delicate garden structures in Suzhou and others all served as inspirations for the design of the numerous sites in this imperial garden. The structures and scenes in the Beihai Park are described as masterpieces of gardening technique that reflects the style and the superb architectural skill and richness of traditional Chinese garden art.[1]

In 1179, Jin Emperor Emperor Zhangzong had a country retreat built northeast of Zhongdu, the Jin capital, located in the southwestern part of modern-day Beijing. Taiye Lake was excavated along the Jinshui River[2] and Daning Palace (大寧宮/大宁宫) was erected on Qionghua Island in the lake.[3] The grounds of this palace is now Beihai Park. During the reign of Kublai Khan, the Qionghua island was redesigned by various architects and officials such as Liu Bingzhong, Guo Shoujing and Amir al-Din.[4][5]

The White Dagoba (白塔, Bai Ta, "White Tower") is a 40-meter (131 ft) high stupa placed on the highest point on Jade Flower Island, built to honour the visit of the 5th Dalai Lama in 1651. Its body is made of white stone. Sun, moon and flame engravings decorate the surface of the tower. Destroyed in 1679 by an earthquake, it was rebuilt the following year, and restored again in 1976 because of an earthquake which occurred at Tangshan, near Beijing. A reliquary, secreted inside the structure are Buddhist scriptures, monk's mantles and alms bowl, and the bones of monks (their remains after cremation).

There are several renowned Buddhist temples located within Beihai Park, such as the Yong'an Temple (Temple of Everlasting Peace) and the Chanfu Temple.

On the north bank lies the Five-Dragon Pavilions, five connected pavilions with spires and pointed upswept eaves, which was built in the Ming Dynasty.

The Nine-Dragon Wall lies north of the Five-Dragon Pavilion. It was built in 1402 and is one of three walls of its kind in China. It is made of glazed bricks of seven-colors. Nine complete dragons playing in the clouds decorate both sides of the wall.

Also on the north bank is the Jingxin Room (Quieting Heart Room). It is a garden within the garden, and covers an area of more than 4,000 square meters (43,056 sq ft). Many small traditional Chinese gardens exist throughout the park.

The Round City (团成, Tuancheng) has as its main structure the Hall of Received Light (Chengguangdian), a spacious building with a double-eaved roof made of yellow glazed tiles bordered in green. Inside there is a 1.6 m tall Buddha presented to the Guangxu Emperor by a Khmer (Cambodian) king. It is carved from a single piece of pure white jade inlaid with precious stones. The Eight-Nation Alliance damaged the statue's left arm in the Battle of Peking in 1900.

In Beihai Park, one could find Taihu rocks shipped from the Henan province and a variety of art collections ranging from jade jars from the Yuan-era to a collection of 495 steles bearing inscriptions by trees of hundreds of years old.[1]