From Infogalactic: the planetary knowledge core
Jump to: navigation, search
This article is about the city in Belize, Central America. For other uses, see Belize (disambiguation).

Belize City is the largest city in the Central American country of Belize and was once the capital of the former British Honduras. According to the 2010 census, Belize City has a population of 57,169 people in 16,162 households.[3] It is located at the mouth of the Haulover Creek, which is a tributary of the Belize River. The Belize River empties into the Caribbean Sea 5 miles from Belize City on the Philip Goldson Highway on the coast of the Caribbean. The city is the country's principal port and its financial and industrial hub. Several cruise ships drop anchor outside the port and are tended by local citizens. The city was almost entirely destroyed in 1961 when Hurricane Hattie swept ashore on October 31. It was the capital of British Honduras (as Belize was then named) until the government was moved to the new capital of Belmopan in 1970.[4]

Belize City was founded (originally as "Belize Town") in 1638[2] by British lumber harvesters. It had previously been a small Maya city called Holzuz. Belize Town was ideal for the British as a central post because it was on the sea and a natural outlet for local rivers and creeks down which the British shipped logwood and mahogany. Belize Town also became the home of the thousands of African slaves brought in by the British to assist in the forest industry. It was the coordination site for the 1798 Battle of St. George's Caye, won by the British against would-be invaders, and the home of the local courts and government officials up to the 1970s. For this reason, historians often say that "the capital was the Colony", because the center of British control was here.[5][6]

This sentiment remains true today. Even though people like Antonio Soberanis, George Price and Evan X Hyde all lobbied to take their movements outside, and other ethnic groups such as the Garifuna and Mestizos sprang up elsewhere in the country, people looked to Belize Town for guidance.[5][6]

Belize Town slowly improved its infrastructure and has been the object of numerous infrastructural projects. Nevertheless, many of the streets built from colonial days are still small and congested, a majority of houses are still susceptible to fire and damage from hurricanes, and the city is always awaiting something calamitous to happen.

Belize City has been directly struck by two hurricanes since 1900, the 1931 hurricane and 1961's Hurricane Hattie, and at various times areas of the City have been burnt down, the most recent being the 1999 Albert Street fire that burnt out Mikado's, and a 2004 fire that destroyed the Paslow building. The city has also been hit hard by the 2010 Hurricane Richard. Fires on Northside and Southside have burnt out great stretches of housing, but the Fire Department was able to quench most of these. The city is also susceptible to flooding problems in the rainy season, but timely repairs and a letup in the rain usually help.

Belize City spreads out Mile 6 on the Western Highway and Mile 5 on the Northern Highway, at the Haulover Bridge. The City proper is usually divided into two areas: Northside, bounded by the Haulover Creek and ending in the east at the Fort George area, and Southside, extending to the outskirts of the City and the Port area and including downtown. Politically, it is divided into ten constituencies, described below.

Freetown, the westernmost constituency on Northside, is home to the Belama, Coral Grove, Buttonwood Bay and Vista Del Mar suburbs. Within the city proper it extends up to around the former Belize Technical College area.

Caribbean Shores includes Kings' Park, a small suburb north and west of Freetown Road, West Landivar, home to two of the University of Belize's three City campuses, and residential University Heights. Pickstock inhabits the banks of the Haulover Creek extending to Barrack Road. St. John's Cathedral stands on the southern end of Albert Street. St. John’s is the oldest Anglican Church in Central America, and one of the oldest buildings in Belize. The orange bricks came to Belize aboard British ships as ballast. Construction began in 1812, and the church was completed in 1820. St. John’s is the only Anglican cathedral in the world outside England where the crowning of kings took place.

Fort George is perhaps the most colonial area in the City and contains Memorial Park, the Baron Bliss Grave and Baron Bliss Lighthouse and the Museum of Belize.

On the Southside, Lake Independence, Collet and Port Loyola are home to some of the city's poorest residents. "London bridges", rickety wooden pallets linking dwellings, and low-strung poles are not uncommon here. On the east side of Central American Boulevard are Mesopotamia, Queen's Square and Albert, which are slightly better. Albert contains the downtown streets of Albert and Regent Streets.

Bridges and other infrastructure 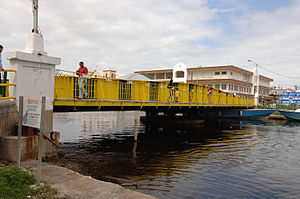 The Swing Bridge in Belize City is the only functioning, manually operated swing bridge in the world.

The divisions of the City are linked by three bridges: the Swing Bridge, located at Market Square and North Front Street; the Belchina Bascule Bridge at the Douglas Jones Street and Youth for the Future Drive junction, and the Belcan Bridge linking Central American Boulevard and the Roundabout leading to the Northern Highway and Caribbean Shores. Numerous smaller bridges link individual streets.

The three main canals running in Belize City, are Haulover Creek, Burdon Canal and Collet Canal. All of them run through the Southside.

The city is served by Philip S. W. Goldson International Airport, which is located in Ladyville, northwest of Belize City, and by Belize City Municipal Airport, located within the city itself.

Belize City features a tropical monsoon climate, with warm and humid conditions throughout the course of the year. The city has a lengthy wet season that runs from May through January and a short dry season covering the remaining three months. However, as is the characteristic of several cities with tropical monsoon climates, Belize City sees some precipitation during its dry season. April is Belize City’s driest month with only 51 mm of precipitation observed, a somewhat unusual month for a city with this climate type. Typically the driest month for a city with a tropical monsoon climate is the month after the winter solstice, which in Belize City would be January. Average monthly temperatures remain relatively constant throughout the course of the year, ranging from 23 °C to 28 °C.

Belize City has more educational institutions at every level than any other city in Belize. Most City children in Belize attend high school. The only three schools that are not coed are on the Northside: Saint John's College (boys), Saint Catherine's Academy (girls) and Pallotti High School (girls). One Southside school that was previously all girls, Sadie Vernon Technical (Belize Continuation), recently integrated. There are 3 other private schools in Belize City: Belize Elementary School and its continuation Belize High School behind it, both located at the Princess Margret Drive, and the Hummingbird Elementary School.

Belize City's culture is considered similar to that of Caribbean capital cities such as St. George's, Grenada or Georgetown, Guyana. Always busy in the daytime, there is the hustle and bustle one would associate with a city of 70,800. Notable cultural events include Garifuna Settlement Day (November 19), Belize City Carnival (September), Baron Bliss Day (March 9).

Museums in the city include the Bliss Institute, Image Factory Art Foundation and Gallery, the Maritime Museum and the Museum of Belize.

The majority of working Belizeans travel to work in downtown offices or else ply their trade on the street sides. Belize City is home to branches of all the major banks of Belize and the Central Bank, as well as nearly all insurance centers, marketplaces and the like. Belize City is the hub for both national and international air, sea and road travel.

Belize City is operated by a mayor-council form of government. The Belize City Council is composed of 10 councillors (generally reflecting the ten constituencies located in Belize City) and a mayor, all elected in municipal elections held every third year in March. After the most recent municipal elections in 2015, the current Mayor is Darrell Bradley of the United Democratic Party.

The city is also home to the House of Culture, formerly the official residence of the Governor-General of Belize until 1984. The Supreme Court of Belize still sits in Belize City.

The City of Belize has been featured in two movies: The Dogs of War (1980), starring Christopher Walken, and The Mosquito Coast (1986), starring Harrison Ford.