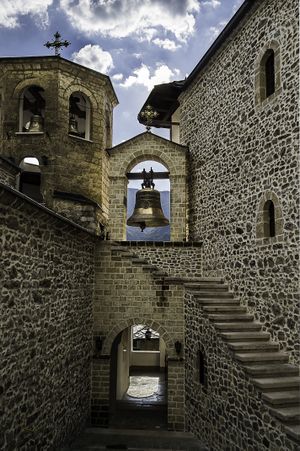 A bell tower in the Saint Jovan Bigorski Monastery, Macedonia

A bell tower is a tower that contains one or more bells, or that is designed to hold bells, even if it has none. In the European tradition, such a tower most commonly serves as part of a church and contains church bells. In such cases the bell tower is located at the western end of the church.[1] Modern bell towers often contain carillons.

The Italian term campanile (/ˌkæmpəˈniːliː/; Italian pronunciation: [kampaˈniːle]), deriving from the word 'campana' meaning bell, is synonymous with 'bell tower'; in English it tends to be used to refer to freestanding bell towers.

A bell tower may also be called a belfry, though this term may also refer to the substructure that houses the bells rather than the tower as a whole.

Old bell towers may be kept for their historic or iconic value, though in countries with a strong campanological tradition they often continue to serve their original purposes as well.

Bell towers are common in China and neighbouring countries, where they may appear both as part of a temple complex and as an independent civic building. The tallest free-standing bell tower in the world, approximately 110 m, is the Joseph Chamberlain Memorial Clock Tower, located at the University of Birmingham, UK.[2][3]

The Santo Tomás parish church in Haro, La Rioja has an exconjuratory in its bell tower

The bell is rung to signify the time; to call people to worship, or for special events such as weddings and funerals; or (historically) to sound a civil defense or fire alarm.

Bell towers may also contain carillons or chimes, musical instruments traditionally composed of large bells, which are sounded by cables, chains, or cords connected to a keyboard. These can be found in many churches in Europe and America and at some college and university campuses.[4] In modern constructions that do not qualify as carillons, rather than using heavy bells the sound may be produced by the striking of small metal rods whose vibrations are amplified electronically and sounded through loudspeakers. Simulated carillon systems have also used recordings or samplings of bells onto vinyl record, tape, compact disc, or memory chips.[5]

Some churches have an exconjuratory in the bell tower, a space where ceremonies were conducted to ward off weather-related calamities, like storms and excessive rain. The main bell tower of the Cathedral of Murcia has four.

In Christianity, many Anglican, Catholic, and Lutheran churches ring their church bells from belltowers three times a day, at 6 a.m., noon, and 6 p.m., summoning the Christian faithful to recite the Lord’s Prayer,[6][7][8] or the Angelus, a prayer recited in honour of the Incarnation of God.[9][10] In addition, most Christian denominations ring church bells to call the faithful to worship, signalling the start of a mass or service of worship.[11] In many historic Christian churches, church bells are also rung during the processions of Candlemas and Palm Sunday;[12] traditionally, church bells are silent from Maundy Thursday through the Easter Vigil.[13] The Christian tradition of the ringing of church bells from a belltower is analogous to Islamic tradition of the adhan from a minaret.[14][15]

In AD 400, Paulinus of Nola introduced church bells into the Christian Church.[16][17] By the 11th century, bells housed in belltowers became commonplace.[17] 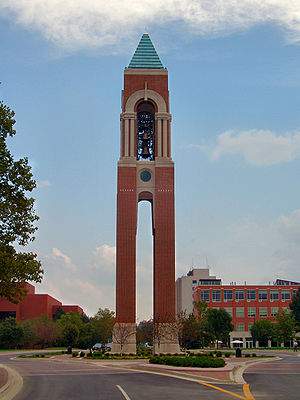 Historic bell towers exist throughout Europe. The Irish round towers are thought to have functioned in part as bell towers. Famous medieval European examples include Bruges (Belfry of Bruges), Ypres (Cloth Hall, Ypres), Ghent (Belfry of Ghent). Perhaps the most famous European free-standing bell tower, however, is the so-called "Leaning Tower of Pisa", which is the campanile of the Duomo di Pisa in Pisa, Italy. In 1999 thirty-two Belgian belfries were added to the UNESCO's list of World Heritage Sites. In 2005 this list was extended with one Belgian and twenty-three French belfries and is since known as Belfries of Belgium and France. Most of these were attached to civil buildings, mainly city halls, as symbols of the greater power the cities in the region got in the Middle Ages; a small number of buildings not connected with a belfry, such as bell towers of—or with their—churches, also occur on this same list (details). In the Middle Ages, cities sometimes kept their important documents in belfries. Not all are on a large scale; the "bell" tower of Katúň, in Slovakia, is typical of the many more modest structures that were once common in country areas. Archaic wooden bell towers survive adjoining churches in Lithuania and as well as in some parts of Poland.

Bell towers (Chinese: Zhonglou, Japanese: Shōrō) are common in China and the countries of related cultures. They may appear both as part of a temple complex and as an independent civic building, often paired with a drum tower, as well as in local church buildings. Among the best known examples are the Bell Tower (Zhonglou) of Beijing and the Bell Tower of Xi'an.

In the modern period bell towers have been built throughout the western world as follies, memorials and as decorative–iconic monuments, and are common on university campuses and other civic institutions.