From Infogalactic: the planetary knowledge core
Jump to: navigation, search
This article is about the former company. For the current company, see Belvidere and Delaware River Railway.

The Belvidere Delaware Railroad (Bel Del) was a railroad running along the eastern shore of the Delaware River from Trenton, New Jersey north via Phillipsburg, New Jersey to the small village of Manunka Chunk, New Jersey. It served as part of the Pennsylvania Railroad (PRR) system, carrying mainly anthracite coal and iron ore from northeastern Pennsylvania to population centers along the coast. 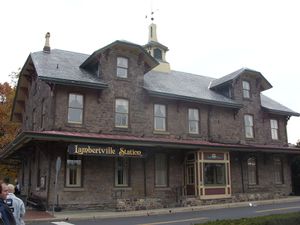 The Belvidere-Delaware Railroad was chartered on March 2, 1836 and was constructed between 1850 and 1855 from Trenton along the Delaware River north to Belvidere, New Jersey. The Trenton-Lambertville section opened on February 6, 1851, eventually reaching Belvidere on November 5, 1855.

On June 7, 1854, the Bel-Del agreed to operate the Flemington Railroad and Transportation Company, where a connection was made with the Central Railroad of New Jersey (CNJ) at Flemington, New Jersey. LV coal trains began using the Bel-Del in January 1856, joining the Bel-Del by the LV's bridge over the Delaware River where it connection in Phillipsburg, New Jersey. An extension was then completed in 1864 that gave the Bel-Del access to the Delaware, Lackawanna & Western Railroad (DL&W) at Manunka Chunk, and permitted trains to operate via trackage rights to East Stroudsburg, Pennsylvania through the Delaware Water Gap. The Pennsylvania Railroad (PRR) began operating the Bel Del as the Belvidere Division of the United Railroads of New Jersey Grand Division in 1871 and purchased the line soon afterwards. The Belvidere-Delaware Railroad and the Flemington Railroad & Transportation Company then merged on February 16, 1885 to form the Belvidere Delaware Railroad. For much of the late 19th century and early 20th century the railroad line proved vitally useful.

In 1889 the Lehigh & Hudson River Railway made a deal with PRR to operate on the Bel-Del between Phillipsburg and Belvidere where LHR's track to Maybrook, New York connects.

By the 1950s steam locomotives had been replaced with diesel operated self-propelled Doodlebugs as a cost-saving measure resulting from dwindling patronage.

In August 1955, flood waters from the Delaware River caused by Hurricane Diane washed out portions of the line north of Belvidere near where the right-of-way crosses modern-day US Route 46, although the line still remains active south of this point to serve Hoffman-LaRoache pharmaceutical plant. North of where the plant is now to the junction at Manunka Chunk was subsequently removed in late 1955. On December 31, 1957, the Bel-Del was merged into the United New Jersey Railroad and Canal Company, with passenger services ending by October 25, 1960.

Heritage operator Black River & Western Railroad (BR&W) began leasing the Flemington Branch from PRR on weekends to operate steam excursions. As part of the leasing agreement, BR&W was required to pay PRR for all track expenses, totalling $5,000. Trains began operating between Flemington and Lambertville by May 16, 1965.[1]

The PRR merged with rival New York Central Railroad in 1968 to form the Penn Central (PC), which fell apart faster than it came together. PC remnants were absorbed by Conrail in April 1976, which treated the Bel-Del as a dispensable secondary line. The chief function of the Bel-Del — bringing coal and iron ore between the LV connection at Phillipsburg with the PRR system — had long since ceased. The main priority freight trains were rerouted to other lines. With little industry remaining between Trenton and Milford, Conrail had little use for the line. Though the south end of line passed within a few hundred yards from the central business district and state capitol complex in Trenton, no official interest in taking advantage of the line's passenger potential was raised.[1] When it became known that Conrail was planning to abandon the Bel-Del, the BR&W purchased approximately three mile of track in the Lambertville area to continue to serve several freight customers located in town. (The BR&W had already purchased the 11-mile line between Flemington and Lambertville from PC in March 1970 for $153,000.)[1]

Conrail ceased interchanging with BR&W in early 1977 when a new connection opened at Three Bridges, eventually abandoning the line south of Milford to Trenton in November 1978 after doing a final inspection of the Milford-Lambertville segment with a service train before dismantlement. Track removal began in the summer of 1979 and ended in the spring of 1982. In those three years Conrail dismantled 32 miles of the line. The former railroad bed was converted for use as part of the Delaware & Raritan Canal Trail. Conrail renamed the Belvidere Branch their Delaware Secondary in the early 1980s from Milford to Belvidere.

Conrail later sold the Phillipsburg-Milford section to the newly formed Belvidere & Delaware River Railway (BDRV) in 1995. In 1998, the BR&W ceased regular operations into Lambertville when the Federal Railroad Administration|FRA]] demoted the track to excepted prohibiting the continuation of passenger trains on that segment of the line. Freight service was almost non-existent by the late 1990s as well. Service trains kept seldom using the Ringoes-Lambertville branch line portion into 2003. BDRV served a paper plant south of Milford, NJ until 2003 when the paper mill closed. The line south of Carpentersville was soon after closed to Riegelsville in 2004 when another paper plant decided to not continue using rail service. Flooding also damaged the line in the Riegelsville area at the time. The New York Susquehanna & Western Historical & Technical Society (NYS&WH&TS) started running passenger trains in 2004 between Phillipsburg and Carpentersville and has since become a successful operation. In recent years both the NYSWHTS and the Black River Railroad Historical Trust (the entity that now runs passenger trains on BR&W) have been gradually restoring the dormant Milford and Lambertville lines. Norfolk Southern retains ownership of the Phillipsburg-Belvidere main line after the Conrail split of 1999 with CSX Transportation. They continue to use the line mostly in a nocturnal fashion serving a few customers in Martins Creek accessed by the old Lehigh & New England Railroad Martins Creek Branch, Roxburg via a spur over the river and Belvidere. NS also interchanges with the Delaware-Lackawanna Railroad in Portland, Penn. via the former Delaware, Lackawanna & Western Railroad Bangor-Portland Division.