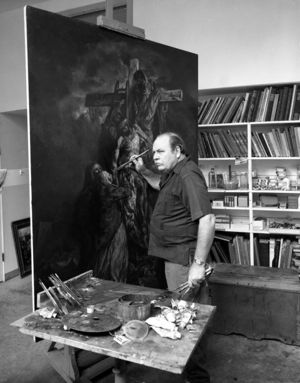 This article is about the artist, illustrator and author. For the labor organizer, see Ben Stahl.

Benjamin Albert Stahl (September 7, 1910 – October 19, 1987) was an American artist, illustrator and author. He showed precocious talent, winning a scholarship to the Art Institute of Chicago at age twelve. His artwork appeared in the International Watercolor Show at the Art Institute when he was sixteen. He later taught at the Art Institute, as well as at the American Academy of Art, the Art Students League of New York, Brooklyn's Pratt Institute and at various universities.

Stahl won many prizes, including the Saltus Gold Medal of the National Academy of Design. His work appeared in Women's Home Companion, Cosmopolitan, American Artist, North Light, Esquire, the Chicago Tribune Magazine, Picture Post, Southwest Art and in some 750 stories in The Saturday Evening Post. He was featured in the 1976 television series Journey into Art with Ben Stahl, 26 half-hour programs consisting of lectures and painting demonstrations by the artist. Stahl was one of the founding faculty for the Famous Artists School. In 1986, he guest-starred on Season 7 of the The Joy of Painting.

Stahl also produced advertising artwork for various companies, and posters for several movies, including Ben-Hur. He illustrated a number of books, including The Innkeeper's Wife by A.J. Cronin, a limited edition of Madame Bovary, and the 25th anniversary edition of Gone with the Wind. Stahl wrote two novels: Blackbeard's Ghost was published in 1965 by Houghton Mifflin, and made into a movie by The Walt Disney Company in 1968; The Secret of Red Skull, a sequel to Blackbeard's Ghost, was also published by Houghton Mifflin, with illustrations by Stahl's eldest son, Ben F. Stahl.