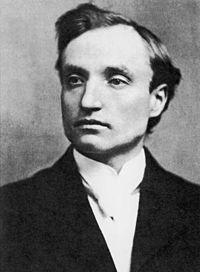 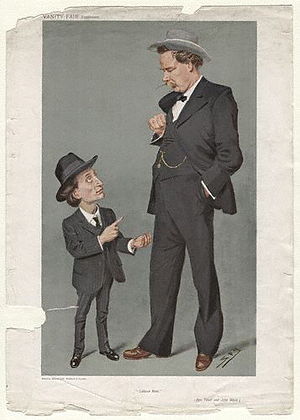 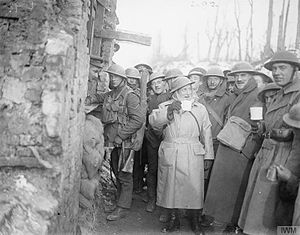 Tillett with British troops on the western front, January 1918

He was born in Bristol. He started work in a brickyard at eight years of age and was a "Risley" boy for two years. At 12 years of age, he served for six months on a fishing smack, was afterwards apprenticed to a bootmaker and then joined the Royal Navy. He was invalided out of the navy and made several voyages in merchant ships. He then settled at the London Docks, and took up work as a docker.[1]

He began his career as a trade union organiser in 1887 by forming the Tea Operatives and General Labourers Union at Tilbury docks. Tillett and his union, renamed the Dock, Wharf, Riverside and General Labourers' Union, rose to prominence during the London Dock Strike (1889), although the strike itself began without union involvement. Tillett also played a prominent role as a strike leader in dock strikes in 1911 and 1912. He was instrumental in forming the National Transport Workers' Federation in 1910, along with Havelock Wilson of the Seamen's Union.

Tillett's union was the largest of the unions which came together in 1922 to form the Transport and General Workers' Union, however, it was Tillett's deputy, Ernest Bevin, rather than Tillett himself, who took the major role in bringing about the amalgamation. Bevin became the General Secretary of the new union, but Tillett held the post of International and Political Secretary until 1931 and retained his seat on the General Council of the Trades Union Congress until 1932.

Tillett was a member of the Fabian Society and a founding member of the Independent Labour Party, but subsequently joined the Social Democratic Federation instead. He also joined the Bristol Socialist Society in the 1880s, when he often travelled to that city.

Tillett courted controversy with some of his supporters in the labour movement through his outspoken support of Britain's involvement in the First World War, an issue which split the Labour Party. In article in the 3 July 1915 issue of The Illustrated London News, the pro-war writer G. K. Chesterton offered his explanation:

It is the moderate Socialists who are Pacifists; the fighting Socialists are patriots. Mr. Ben Tillett would have been regarded by Mr. Ramsay Macdonald as a mere firebrand; but it is precisely because Mr. Tillet was ready to go on fighting Capitalism that he is ready to go on fighting Krupp. It is precisely because Mr. Macdonald was weak in his opposition to domestic tyrants, that he is weak in his opposition to foreign ones. The wobblers who wanted a one-sided arbitration to end the strikes would to-day accept a one-sided arbitration to end the battles. But the men who wanted strikes want nothing but shells. That great artist, Mr. Will Dyson, laid aside the lethal pencil with which he had caricatured the sweaters and the middlemen, and sharpened a yet deadlier one to draw all the devils in Prussia.

Before the First World War, Tillett had defended the idea of an international general strike in case of war, but like most trade union leaders, Tillett decided in 1914 to support the British war aims, writing a pamphlet published in 1917, "Who was Responsible for the war and why ?" in which he declared "Despite our former pacifist attitude, the forces of Labour in England have supported the government throughout the war. We realised that this is a fight for world freedom against a carefully engineered plan to establish a world autocracy".