The Bengali alphabet or Bangla alphabet (Bengali: বাংলা লিপি Bangla lipi) is the writing system for the Bengali language and is the 6th most widely used writing system in the world. The script is shared by Assamese with minor variations, and is the basis for the other writing systems like Meithei and Bishnupriya Manipuri. Historically, the script has also been used to write Sanskrit in the region of Bengal.

From a classificatory point of view, the Bengali script is an abugida, i.e. its vowel graphemes are mainly realized not as independent letters, but as diacritics attached to its consonant letters. It is written from left to right and lacks distinct letter cases. It is recognizable, as are other Brahmic scripts, by a distinctive horizontal line running along the tops of the letters that links them together which is known as মাত্রা matra. The Bengali script is however less blocky and presents a more sinuous shape.[clarification needed]

The Bengali script evolved from the Siddhaṃ script, which belongs to the Brahmic family of scripts. In addition to differences in how the letters are pronounced in the different languages, there are some typographical differences between the version of the script used for Assamese language and that used for Bengali language. For example:

The Bengali script was originally not associated with any particular language, but it was often used in the eastern regions of Medieval India and then in Pala Empire and later continued to be specifically used in the Bengal region. It was later standardized into the modern Bengali script by Ishwar Chandra under the reign of the East India Company. Today, the script holds official script status in Bangladesh and India, and is associated with the daily life of Bengalis.

The Bengali script can be divided into vowel diacritics, consonant and vowel letters (including consonant conjuncts), modifiers, digits, and punctuation marks.

The Bengali script has a total of 11 vowel graphemes, each of which is called a স্বরবর্ণ sbôrôbôrnô "vowel letter". The sbôrôbôrnôs represent six of the seven main vowel sounds of Bengali, along with two vowel diphthongs. All of them are used in both Bengali and Assamese, the two main languages using the script.

The table below shows the vowels present in the modern (since the late nineteenth century) inventory of the Bengali alphabet, which has abandoned three historical vowels, ৠ rri, ঌ li, and ৡ lli, traditionally placed between ঋ ri and এ e. 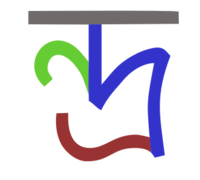 Up to four consecutive consonants not separated by vowels can be orthographically represented as a typographic ligature called a "consonant conjunct" (Bengali: যুক্তাক্ষর juktakkhôr or যুক্তবর্ণ juktôbôrnô). Typically, the first consonant in the conjunct is shown above and/or to the left of the following consonants. Many consonants appear in an abbreviated or compressed form when serving as part of a conjunct. Others simply take exceptional forms in conjuncts, bearing little or no resemblance to the base character.

Often, consonant conjuncts are not actually pronounced as would be implied by the pronunciation of the individual components. For example, adding ল lô underneath শ shô in Bengali creates the conjunct শ্ল, which is not pronounced shlô but slô in Bengali. Many conjuncts represent Sanskrit sounds that were lost centuries before modern Bengali was ever spoken, as in জ্ঞ, which is a combination of জ jô and ঞ nô, but it is not pronounced jnô, Instead, it is pronounced ggô in modern Bengali. Thus, as conjuncts often represent (combinations of) sounds that cannot be easily understood from the components, the following descriptions are concerned only with the construction of the conjunct, and not the resulting pronunciation.

Some consonants are written closer to one another simply to indicate that they are in a conjunct together.

Some consonants are compressed (and often simplified) when appearing as the first member of a conjunct.

Some consonants are abbreviated when appearing in conjuncts and lose part of their basic shape.

Some consonants have forms that are used regularly but only within conjuncts.

When serving as a vowel sign, উ u, ঊ u, and ঋ ri take on many exceptional forms.

ঃ -h and ং -ng are also often used as abbreviation marks in Bengali, with ং -ng used when the next sound following the abbreviation would be a nasal sound, and ঃ -h otherwise. For example, ডঃ dôh stands for ডক্টর dôktôr "doctor" and নং nông stands for নম্বর nômbôr "number". Some abbreviations have no marking at all, as in ঢাবি dhabi for ঢাকা বিশ্ববিদ্যালয় Dhaka Bishbôbidyalôy "University of Dhaka". The full stop can also be used when writing out English letters as initials, such as ই.ইউ. i.iu "E.U.".

The apostrophe, known in Bengali as ঊর্ধ্বকমা urdhbôkôma "upper comma", is sometimes used to distinguish between homographs, as in পাটা pata "plank" and পা'টা pa'ta "the leg". Sometimes, a hyphen is used for the same purpose (as in পা-টা, an alternative of পা'টা).

ৎ (called খণ্ড-ত khôndô tô "broken tô") is always used syllable-finally and always pronounced as /t̪/. It is predominantly found in loan words from Sanskrit such as ভবিষ্যৎ bhôbishyôt "future", সত্যজিৎ sôtyôjit (a proper name), etc. It is also found in some onomatopoeic words (such as থপাৎ thôpat "sound of something heavy that fell", মড়াৎ môrat "sound of something breaking", etc.), as the first member of some consonant conjuncts (such as ৎস tsô, ৎপ tpô, ৎক tkô, etc.), and in some foreign loanwords (e.g. নাৎসি natsi "Nazi", জুজুৎসু jujutsu "Jujutsu", ৎসুনামি tsunami "Tsunami", etc.) which contain the same conjuncts. It is an overproduction inconsistency, as the sound /t̪/ is realized by both ত and ৎ. This creates confusion among inexperienced writers of Bengali. There is no simple way of telling which symbol should be used. Usually, the contexts where ৎ is used need to be memorized, as they are less frequent. In the native Bengali words, syllable-final ত tô /t̪ɔ/ is pronounced /t̪/, as in নাতনি /nat̪ni/ "grand-daughter", করাত /kɔrat̪/ "saw", etc.

The Bengali script has ten numerical digits (graphemes or symbols indicating the numbers from 0 to 9). Bengali numerals have no horizontal headstroke or মাত্রা "matra".

Numbers larger than 9 are written in Bengali using a positional base 10 numeral system (the decimal system). A period or dot is used to denote the decimal separator, which separates the integral and the fractional parts of a decimal number. When writing large numbers with many digits, commas are used as delimiters to group digits, indicating the thousand (হাজার hazar), the hundred thousand or lakh (লাখ lakh or লক্ষ lôkkhô), and the ten million or hundred lakh or crore (কোটি koti) units. In other words, leftwards from the decimal separator, the first grouping consists of three digits, and the subsequent groupings always consist of two digits.

For example, the English number 17,557,345 will be written in traditional Bengali as ১,৭৫,৫৭,৩৪৫.

Bengali punctuation marks, apart from the downstroke দাড়ি dari (|), the Bengali equivalent of a full stop, have been adopted from western scripts and their usage is similar: Commas, semicolons, colons, quotation marks, etc. are the same as in English. Capital letters are absent in the Bengali script so proper names are unmarked.

Characteristics of the Bengali text 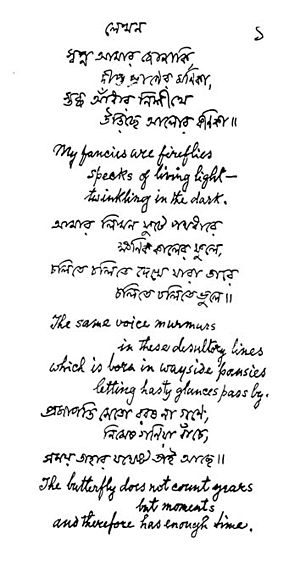 An example of handwritten Bengali script. Part of a poem written by Nobel Laureate Rabindranath Tagore in 1926 in Hungary.

Bengali text is written and read horizontally, from left to right. The consonant graphemes and the full form of vowel graphemes fit into an imaginary rectangle of uniform size (uniform width and height). The size of a consonant conjunct, regardless of its complexity, is deliberately maintained the same as that of a single consonant grapheme, so that diacritic vowel forms can be attached to it without any distortion. In a typical Bengali text, orthographic words, words as they are written, can be seen as being separated from each other by an even spacing. Graphemes within a word are also evenly spaced, but that spacing is much narrower than the spacing between words.

Unlike in western scripts (Latin, Cyrillic, etc.) for which the letter-forms stand on an invisible baseline, the Bengali letter-forms instead hang from a visible horizontal left-to-right headstroke called মাত্রা matra. The presence and absence of this matra can be important. For example, the letter ত tô and the numeral ৩ "3" are distinguishable only by the presence or absence of the matra, as is the case between the consonant cluster ত্র trô and the independent vowel এ e. The letter-forms also employ the concepts of letter-width and letter-height (the vertical space between the visible matra and an invisible baseline).

According to Bengali linguist Munier Chowdhury, there are about nine graphemes that are the most frequent in Bengali texts, shown with its percentage of appearance in the table on the right.[6]

In the script, clusters of consonants are represented by different and sometimes quite irregular forms; thus, learning to read is complicated by the sheer size of the full set of letters and letter combinations, numbering about 350. While efforts at standardizing the alphabet for the Bengali language continue in such notable centres as the Bangla Academy at Dhaka (Bangladesh) and the Pôshchimbônggô Bangla Akademi at Kolkata (West Bengal, India), it is still not quite uniform yet, as many people continue to use various archaic forms of letters, resulting in concurrent forms for the same sounds. Among the various regional variations within this script, only the Assamese and Bengali variations exist today in the formalized system.

It seems likely that standardization of the alphabet will be greatly influenced by the need to typeset it on computers. The large alphabet can be represented, with a great deal of ingenuity, within the ASCII character set, omitting certain irregular conjuncts. Work has been underway since around 2001 to develop Unicode fonts, and it seems likely that it will split into two variants, traditional and modern. In this and other articles on Wikipedia dealing with the Bengali language, a Romanization scheme used by linguists specializing in Bengali phonology is included along with IPA transcription. A recent effort by the Government of West Bengal focused on simplifying the Bengali orthography in primary school texts.

There is yet to be a uniform standard collating sequence (sorting order of graphemes to be used in dictionaries, indices, computer sorting programs, etc.) of Bengali graphemes. Experts in both Bangladesh and India are currently working towards a common solution for the problem.

Romanization of Bengali is the representation of the Bengali language in the Latin script. There are various ways of Romanization systems of Bengali, created in recent years but failed to represent the true Bengali phonetic sound. While different standards for romanization have been proposed for Bengali, they have not been adopted with the degree of uniformity seen in languages such as Japanese or Sanskrit.[nb 2] The Bengali alphabet has often been included with the group of Brahmic scripts for romanization in which the true phonetic value of Bengali is never represented. Some of them are the International Alphabet of Sanskrit Transliteration or "IAST system" [7] "Indian languages Transliteration" or ITRANS (uses upper case alphabets suited for ASCII keyboards),[8] and the extension of IAST intended for non-Sanskrit languages of the Indian region called the National Library at Kolkata romanization.[9]

Article 1 of the Universal Declaration of Human Rights

Clause 1: All human free-manner-in equal dignity and right taken birth-take do. Their reason and intelligence exist; therefore everyone-indeed one another's towards brotherhood-ly attitude taken conduct do should.

Article 1: All human beings are born free and equal in dignity and rights. They are endowed with reason and conscience. Therefore, they should act towards one another in a spirit of brotherhood.

Bengali script was added to the Unicode Standard in October, 1991 with the release of version 1.0.