The Bengali Era (BS), or the Anno Bengali (AB), the Bengali year (বাংলা সন Bangla Sôn, বাংলা সাল Bangla sal) is 594 less than the AD or CE year in the Gregorian calendar if it is before Pôhela Bôishakh, or 593 less if after Pôhela Bôishakh.

The revised version of the Bengali calendar was officially adopted in Bangladesh in 1987. However, it is not followed in India where the unrevised (non-revised) traditional version continues to be followed due to occurrence of Hindu festivals based on a particular lunar day.[1]

The Bengali calendar is a solar calendar.[1][2]

The origin of Bônggabdô or Bengali Year (Bangla Year) is debated, with primarily two hypotheses. The development of the Bengali calendar is often attributed to King of Gour, Shashanka as the starting date (12 or 14 April 594 CE) falls squarely within his reign.[1][3] The solar calendar is based on the Surya Siddhanta, a Sanskrit astronomical text.[1]

Another theory is that the calendar was developed by Alauddin Husain Shah (reign 1494–1519), a Hussain Shahi sultan of Bengal by combining the lunar Islamic calendar (Hijri) with the solar calendar, prevalent in Bengal.[3]

All theories agree that the Mughal Emperor, Akbar (reign 1556 – 1605) was instrumental in "promulgating" the Bengali calendar. Akbar modified, developed and re introduced the Bengali Calendar in order to make tax collection easier in Bengal. The calendar was then called as Tarikh-e-Elahi (তারিখ-ই ইলাহি). Akbar changed the practice of agricultural tax collection which had been according to the Islamic calendar and ordered an improvement of the calendar systems, because the lunar Islamic calendar did not agree with the harvest sessions and the farmers faced severe difficulties in paying taxes out of season. Some sources credit the idea to the finance minister of Akbar, Todar Mal.[1][2][3]

Akbar's royal astronomer Fathullah Shirazi developed the Bengali calendar, by synthesizing the Lunar Islamic and Solar Hindu calendars. The calendar started with the Islamic calendar value, but the Sanskrit month names were used from the earlier version.[1] The distinctive characteristic of the Bengali year was that rather than being a lunar calendar, it was based on a union of the solar and lunar year. This was essentially a great promotion as the solar and lunar years were formulated in very diverse systems.

Primarily this calendar was named as "Fasli Sôn" and then "Bônggabdô". The Bengali Year was launched on 1584 AD or 992 AH (Hijri), but was dated from the year 1556 AD or 963 AH. This was the day that Akbar defeated Hemu in the clash of Panipat to ascend the throne. The month of Muharram in the year 963 AH was equal to the month of Boishakh in the Bengali calendar, and so Boishakh month has continued to be the first month of the Bengali calendar.[4]

In the "Tarikh-e-Elahi" version of the calendar, each day of the month had a separate name, and the months had different names from what they have now. Akbar's grandson Shah Jahan reformed the calendar to use a seven-day week that begins on Sunday, and the names of the months were changed at an unknown time to match the month names of the existing Saka calendar.[2][5]

Akbar ordered all dues to be resolved on the last day of the last month চৈত্র Chôitrô. The next day was the first day of the New Year (পহেলা বৈশাখ Pôhela Bôishakh), the day for a new opening; landlords used to allocate sweets among their tenants and businessmen would commence a হালখাতা Halkhata (new financial records book) and lock their old ones. Vendors used to provoke[clarification needed] their consumers to allocate sweets and renew their business relationship with them. There were fairs and festivities all over and gradually Pôhela Bôishakh became a day of celebration.

As the traditional unrevised Bengali calendar used in West Bengal is sidereal and does not correspond to the real seasons in Bengal region and also does not correspond to the actual tropical movement of the earth. Hence after some centuries the months will shift far away from the actual seasons. But the new revised tropical version of the Bengali calendar used in Bangladesh will continue to maintain the seasons on time as mentioned above.

The names of the twelve months of the modern Bengali calendar are based on and derived from the ancient astronomical texts of Surya Siddhanta[4] which are the names of the নক্ষত্র nôkkhôtrô (lunar mansions): locations of the moon with respect to particular stars during the lunar cycle.

In the calendar originally introduced by Akbar in the year 1584 AD, each day of the month had a different name, but this was cumbersome, and his grandson Shah Jahan changed this to a 7-day week as in the Gregorian calendar, with the week also starting on a Sunday.[2] 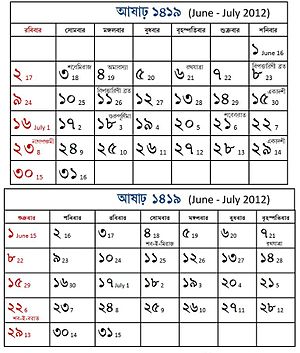 Pôhela Bôishakh in West Bengal and other states of India with Bengali diaspora, is celebrated on 14/15 April of the Gregorian calendar. However, according to the revised version of the calendar, now followed in Bangladesh, Pôhela Bôishakh always falls on 14 April. The length of the months are not fixed in the non-revised original sidereal calendar, now followed in India, rather is based on the true movement of the sun over the constellations of stars.On the contrary, length of the months are fixed in the revised version of the calendar, followed in Bangladesh.

The Bengali calendar in Bangladesh was modified by a committee headed by Muhammad Shahidullah under the auspices of the Bangla Academy on 17 February 1966,[2] which was officially adopted by the government in 1987.

It is not clear; from what ground they start counting of 1st Bengali calendar year from the 593AD.

The length of a year is counted as 365 days, as in the Gregorian calendar. However, the actual time taken by the earth in its revolution around the sun is 365 days 5 hours 48 minutes and 47 seconds. To make up this discrepancy, the Gregorian calendar adds an extra day, to make a leap year, to the month of February every fourth year (except in years divisible by 100 but not by 400). To counter this discrepancy, and to make the Bengali calendar more precise, the following recommendations of the Bangla Academy are followed:

The sidereal (non-revised) calendar followed in West Bengal has the number of days in the months determined by the true motion of the sun through the zodiac. In this calendar seven is subtracted from the year, and the result is divided by 39. If after the division the remainder (= (year  - 7) / 39) is zero or is evenly divisible by 4, the year is then designated as a leap year and contains 366 days, with the last month Chôitrô, taking 31 days. There are 10 leap years in every 39 years, although a revision may be required over a long time.[citation needed]

According to the new Revised calendar system in Bangladesh, Falgun (which begins mid-February) has 31 days every four years. To keep pace with the Gregorian calendar, the Bengali leap years are those whose corresponding Gregorian calendar year is counted as a leap year. For example, Falgun 1410 was considered a Bengali leap month, as it fell during the Gregorian leap month of February 2004.

The usage and popularity of the Bengali calendar in Bengal region is due to its adaptation to the unique seasonal patterns of the region. Bengal has a climate that is best divided into six seasons, including the monsoon or rainy season and the dry season, in addition to spring, summer, autumn, and winter.