Beni, sometimes El Beni, is a northeastern department of Bolivia, in the lowlands region of the country. It is the second largest department in the country (after Santa Cruz), covering 213,564 square kilometers (82,458 sq mi), and it was created by supreme decree on November 18, 1842 during the administration of General José Ballivián. Its capital is Trinidad.

With a population of 420,000 (2006 census), Beni is the second most sparsely populated of the nine departments of Bolivia, after Pando.

Although Beni is rich in natural resources, the poverty level of its inhabitants is high, mainly as a result of the absence of adequate roads linking the department to the rest of country. The main economic activities are agriculture, timber and cattle. In addition, an underground economy linked to illegal narcotics activities flourished in the area during the last decades of the 20th century, with many cocaine laboratories hiding behind the façade of remote cattle ranches.

The Beni region features many large mounds connected by earthen causeways which were built by ancient inhabitants. The first European settlers were Spanish Jesuits sent to convert the native inhabitants, chiefly in the southern half of the department, during the 18th century. The religious origins of many of the Beni's towns can be attested to by the centrality of the local church in most of the communities, and in the very names of the towns: Trinidad, Santa Ana, San Borja, Reyes, etc. Today, the Beni region is the seat of the Roman Catholic Apostolic Vicariate of El Beni.

The importance of cattle ranching is prominent in the regional culture, and cowboys, or "Vaqueros", still play an important role in Beni society, comprising a large portion of the working class. Other industries significant to the region include logging, small-scale fishing and hunting, farming, and in recent years, eco-tourism.

Though the Beni lies in the southern reaches of the Amazon Basin, an area renowned for tropical disease, the population experiences less health problems than in the Andes Region, especially those related to malnutrition.

The inhabitants (Benianos) are mostly descendants of Cruceños (people from Santa Cruz) who streamed north following the course of navigable rivers, and native peoples. The culture is known as lowland Camba (common to Santa Cruz, Beni, and Pando) and not Andean. Benianos are simple, straightforward people whose Spanish is likely inherited from Santa Cruz which in turn inherited it from Asunción del Paraguay, the departure point of its founders, among them Ñuflo de Chávez. It has been remarked that the Camba dialect, as well as the customs of the inhabitants of Bolivia's tropical lowlands, are almost purely Andalusian.[citation needed]

The Beniano diet consists largely of rice, bananas, beef and fish. Some popular dishes include Majao, Masaco, and others, many featuring cured/salted meats.

The Benianos have traditionally been mistrustful, and often somewhat contemptuous, of Andean culture, considering themselves to be lighter and more purely Spanish than the Quechua and Aymara-speaking populations of the highlands. Considerable resentment existed against the central government, which allegedly did very little to build roads or integrate the Beni into the economy and political life of the country. These attitudes persisted despite the fact that Beni benefited greatly by the Agrarian Reform instituted following the 1952 Revolution, with many citizens coming into ownership of significant tracts of land. Most of these turned to cattle ranching. The absence of a reliable road linking the department to the main centers of power in the country (owing to the difficult terrain) continued to contribute to the Benianos' perception of isolation, as did the a downturn in the cattle industry. This, in turn, translated in an almost automatic support by both the population and departmental authorities for the Santa Cruz-led effort to federalize the country and devolve powers to the departments at the expense of the central government. Considerable social unrest took place in 2007 and 2008, leading some to consider separatism as plausible.

Beni was a very important center of pre-Columbian civilization known as the hydraulic culture of Las Lomas (the hills), a culture that constructed over 20,000 man-made artificial hills, all interconnected by thousands of square kilometers of aqueducts, channels, embankments, artificial lakes and lagoons as well as terraces. Between about 4000 BC (and probably earlier as this date is taken from ceramics that have been carbon dated) and the 13th Century AD this region was settled by important and organized groups of human societies. Their civil structures were based, both environmentally and economically, on the use of specific environmental characteristics (such as the use of aquatic plants as fertilizer, and enormous fishing systems they constructed). You can still see miles and miles of these channels and man-made hills if you fly low over Beni.

When the Spanish arrived the region had already been in decline for about three hundred years. However, this is where many products that are now used worldwide have their origin, among them tobacco, peanuts, cotton, cassava (manioc), vanilla and sweet potatoes. The Spanish initially were intensely interested in this area. During the first century of colonization, they believed the mythical city of El Dorado (also known as Paititi) could be found in this region. However, they never found this legendary city of gold and they soon lost interest in the area, which would remain marginalized for several centuries after.

Between the 19th and 20th centuries northern Beni became Bolivia's rubber capital. The abundance of rubber trees attracted many people to the region, many of them adventurers and others workers (many of whom were indigenous) to work in the huge rubber plantations that arose. For decades it was one of the most active, dynamic regions of Bolivia. Cachuela Esperanza was an important center for rubber exports as it is located along the shores of the Beni River. It had one of the best equipped hospitals in Bolivia at the end of the 19th Century. But these enormous rubber plantations all but disappeared by the end of the Second World War and today many of them are cattle ranches. There are only some small rubber producers who still use the river to transport their production.

The chief executive office of Bolivia departments (since May 2010) is the governor; until then, the office was called the prefect, and until 2006 the prefect was appointed by the President of Bolivia. Beni currently has an interim governor, Haysen Ribera Leigue, who was selected by the Departmental Legislative Assembly on 16 December 2011.[1] Governor Ernesto Suárez Sattori, who was elected on 4 April 2010, was suspended following his indictment for irregular expenditures related to a power plant in San Borja, Beni, in compliance with a Bolivian legal mandate that indicted officials may not continue to serve.[1] An elected replacement for the governor will be chosen in a special election on 20 January 2013.

Under the 2009 Constitution, each Bolivian department has an elected Departmental Legislative Assembly. The first elections were held 4 April 2010. The leading party in the twenty-eight member assembly is Beni First, with 11 seats. The Movement towards Socialism (MAS-IPSP) holds 10 seats, and the Revolutionary Nationalist Movement (MNR) holds 3 seats. Two seats each were selected by indigenous people and by peasants through usos y costumbres. In alliance with the indigenous and peasant representatives, the MAS-IPSP controls the presidency of the Assembly.[2] The three MNR representatives and their alternates were derecognized by the national party in 2010 when they backed MAS-IPSP policies and leadership.[3]

The December 2011 suspension of Governor Ernesto Suarez was backed by 15 votes, including the MAS and MNR delegations, and two indigenous or campesino representatives. Two members of the assembly were also indicted simultaneously and replaced by their alternates: Sonia Suárez Araúz (MNR) was replaced by Juan Carlos Herrera; and Carlos Navia Ribera (MAS-IPSP) was replaced by Tatiana Paniagua Zabala.[4] The interim governor was also a member of the Assembly. 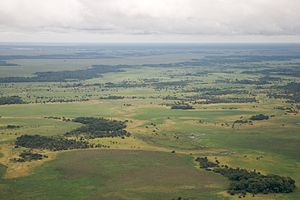 Beni`s weather is tropical and humid, with a prevalence of warm to hot temperatures.

Beni borders upon Brazil to the northeast, and the departments of Santa Cruz to the southeast, La Paz to the west, Pando to the northwest, and Cochabamba to the south. Beni's territory is mainly covered by rainforest (particularly the northern and eastern portions of the department) and pampa (notably the grassland Moxos Plain to the south, closer to the Andean reaches). Much of Beni is at about 155 meters above sea level. Although most of the department is flat, along the border with La Paz there are two sierra chains called Eva Eva and Pelado. Beni is criss-crossed by numerous Rivers, all of which are Amazon tributaries. The largest of these are the Iténez (also known as Guaporé), Mamoré, Madre de Dios, Madera, Yata, Ivón, Machupo, Itonama, Baures, San Martín, San Miguel, San Simón, Negro, Sécure, Yacuma, Maniquí, Ibare and Apere, all of which are navigable. Beni also has numerous lakes and lagoons. The most important of these are: Laguna Suárez, Rogagua, Rogaguado, San Luis, San Pablo, Huachi, Huatunas, Yusala, Huachuna, Agua Clara, Ginebra, La Dichosa, Bolivia, Navidad, Las Abras, Larga, Maracaibo and Aquiles Lake. 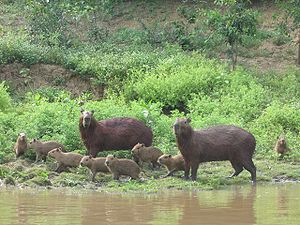 Capybara family in the region of Rurrenabaque, Beni Dept.

In the region's many rivers over 400 species of fish have been found. Trinidad has an entire museum, the Museo Ictícola, dedicated to Beni's fish fauna which is the third largest of its type in South America. The most commonly fished and consumed species are pacú, tambaquí, surubí, palometa (a type of piranha), sábalo, bagre (catfish), and blanquillo. Alligators are also hunted for their leather and meat, which is considered a delicacy and is a common part of meals in Beni. Beni now also exports huge amounts of lumber, although over the past 20 years the government of Bolivia has worked with numerous international entities and NGOs to certify its lumber concessions and all lumber exported must be accompanied by certificates of origin.

Because of its climate and rich soils, the department is Bolivia's second largest agricultural center after Santa Cruz. There are extensive fields of corn, yucca (manioc), sunflowers, rice, and many tropical fruits such as cacao (from which chocolate is made), Brazil nuts (one of the regions main crops and exports), soybeans, bananas, maracuya, guayaba, papaya, and many other citrus fruits. Coffee is also grown extensively. Beni is also the second Bolivia's largest cattle-ranching region. Official estimates calculate there are anywhere between 2 and 2.5 million heads of cattle throughout the year. Most of these are turned out to pasture and thus are naturally fed.

Beni is hot and humid during most of the year with an annual rainfall average between 1,000–4,000 mm (39–157 in). It is one of the wettest regions in Bolivia, with more wetlands than the better-known Pantanal. During the winter (June and July) the weather can be cool and winds blowing northward from the South Pole and Argentina's Patagonia region can cause temperatures to drop quite drastically very quickly.

The department is divided into 8 provinces which are further subdivided into municipalities and 48 cantons.

The dominant language in the department is Spanish. The following table shows the number of those belonging to the recognized group of speakers.[5]