Benjamin Helm Bristow (June 20, 1832 – June 22, 1896) was an American lawyer and Republican Party politician who served as the first Solicitor General of the United States and as a U.S. Treasury Secretary. As the United States' first solicitor general, Bristow aided President Ulysses S. Grant and Attorney General Amos T. Akerman's vigorous and thorough prosecution and destruction of the Ku Klux Klan in the Reconstructed South.[1] Sol. Gen. Bristow advocated African American citizens in Kentucky be allowed to testify in a white man's court case and that education was for all races to be paid for by public funding. As Secretary of the Treasury, Bristow promoted gold standard currency and by President Grant's order thoroughly prosecuted and shut down the notorious Whiskey Ring, a tax evasion scheme that depleted the national treasury. As a strong reformer, Secretary Bristow was one of the most popular Grant Cabinet members among other reformers in the nation. Secretary Bristow was also behind the Resumption of Specie Act of 1875, that helped stabilize the economy during the Panic of 1873.

A native of Kentucky, Bristow was the son of a prominent Whig Unionist and attorney. Having graduated Jefferson College in Pennsylvania in 1851, Bristow studied law and passed the bar in 1853, working as an attorney until the outbreak of the American Civil War in 1861. Fighting for the Union, Bristow served in the army during the American Civil War and was promoted to colonel. Wounded at the Battle of Shiloh, Bristow recuperated and would be promoted to lieutenant colonel. In 1863, Bristow was elected Kentucky state Senator, serving only one term. At the end of the Civil War, Bristow was appointed assistant to the U.S. District Attorney serving in the Louisville area, In 1866, Bristow was appointed U.S. District attorney serving in the Louisville area.

In 1870, Bristow was appointed the United States' first U.S. Solicitor General, who aided the U.S. Attorney General by arguing cases before the U.S. Supreme Court. In 1874, Bristow was appointed U.S. Secretary of the Treasury by President Ulysses S. Grant. Initially Grant gave Bristow his full support during Bristow's popular prosecution of Whiskey Ring. However, when Bristow and Grant's Attorney General Edwards Pierrepont, another reforming Cabinet member, uncovered that Orville Babcock, Grant's personal secretary, was involved in the ring, Grant's relationship with Bristow cooled. In June 1876, due to friction over Bristow's zealous prosecution of the Whiskey Ring and rumor that Bristow was interested in running for the U.S. Presidency, Bristow resigned from President Grant's Cabinet. During the presidential election of 1876, Bristow made an unsuccessful attempt at gaining the Republican presidential ticket, running as a Republican reformer; the Republicans, however, chose Rutherford B. Hayes. After the 1876 presidential election, Bristow returned to private practice in New York, forming a successful law practice in 1878, often arguing cases before the U.S. Supreme Court until his death in 1896.

Born in Elkton, Kentucky, Bristow was the son of Francis Bristow, a Whig member of Congress in 1854–1855 and 1859–1861,[2] and his wife Emily. He was born in Edwards Hall, which had been the home of his late grandfather, Benjamin Edwards.[3] He graduated at Jefferson College, Washington, Pennsylvania, in 1851, studied law under his father, and was admitted to the Kentucky bar in 1853.[2][4]

On September 23, 1863, Bristow was honorably discharged from service in the Union Army; having been elected Kentucky State Senator by Christian County. Bristow had not known he had been elected and served one term as State Senator until 1865, having resigned office.[1] Bristow supported all Union war effort legislation, the presidential election of Abraham Lincoln in 1864, and the passage of the Thirteenth Amendment that outlawed slavery.[1]

In 1870, Congress created the U.S. Department of Justice, in part, to aid in the enforcement of U.S. Congressional Reconstruction laws and U.S. Constitutional amendments. On October 4, 1870, Bristow was appointed the first incumbent U.S. Solicitor General by President Ulysses S. Grant and served until November 12, 1872, having resigned the office.[4][5] Bristow and U.S. Attorney General Amos Akerman prosecuted thousands of Klan's men that resulted in a brief two-year quiet period during the turbulent Reconstruction Era in the South. In 1873 President Grant nominated him Attorney General of the United States in case then Attorney General George H. Williams was confirmed as Chief Justice of the United States, a contingency which did not arise.[2]

In 1871, Bristow traveled to his native Kentucky state and in a speech advocated African American civil rights. Bristow advocated that blacks be given the right to testify in juries. At this time Kentucky law forbid the 225,000 black U.S. citizens from testifying in any civil or criminal case involving a white man. He stated the Kentucky law that denied African Americans the right to testify in a white man's case had roots in slavery and was a "monstrous and grievous wrong to both races." Bristow stated that the Ku Klux Klan Act and the previous Civil Rights acts passed by the U.S. Congress were designed to protect the "humblest citizens" from lawbreakers. Bristow stated he would "tax the rich man's property to educate his poor neighbor's child", and he would "tax the white man's property to educate the black man's child." Bristow advocated free universal education and all property in Kentucky be taxed to pay for schools.[6]

Secretary of the Treasury 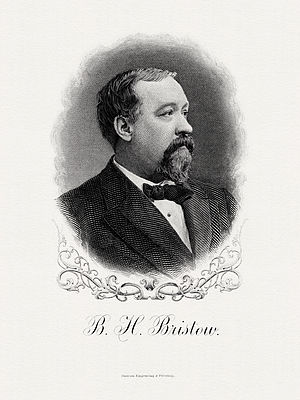 Bureau of Engraving and Printing portrait of Bristow as Secretary of the Treasury.

On June 3, 1874 President Grant appointed Bristow Secretary of the Treasury after William A. Richardson was removed in light of the Sanborn incident.[7] As Treasury Secretary, he initiated a much-needed internal reorganization of the Treasury Department, dismissing the second-comptroller for inefficiency, shaking up the detective force, and consolidating collection districts in the Customs and Internal Revenue Services.

He prosecuted the so-called "Whiskey Ring," which was headquartered in St. Louis, and which, beginning in 1870 or 1871, had defrauded the federal government out of a large part of its rightful revenue from the distillation of whiskey. Distillers and revenue officers in St. Louis, Milwaukee, Cincinnati and other cities were implicated, and the illicit gains, which in St. Louis alone probably amounted to more than $2,500,000 in the six years (1870–1876) were divided between the distillers and the revenue officers, who levied assessments on distillers ostensibly for a Republican campaign fund to be used in furthering Ulysses S. Grant's re-election. Bristow uncovered that prominent among the ring's alleged accomplices at Washington, D.C. was Orville E. Babcock, private secretary to President Grant. Bristow and Grant's Attorney General, Edwards Pierrepont, personally showed Grant evidence at the White House that Babcock was involved in the ring. Grant, however, refused to acknowledge the evidence against Babcock and would later testify through a deposition at Babcock's trial in St. Louis. As a result, Babcock was acquitted by the St. Louis jury. Through Bristow's efforts more than 200 men were indicted, a number of whom were convicted, but after months' imprisonment some were pardoned by Grant. Largely owing to friction between himself and the president, Bristow resigned his portfolio in June 1876; as Secretary of the Treasury he advocated the resumption of specie payments and at least a partial retirement of "greenbacks"; and he was also an advocate of civil service reform.[2] 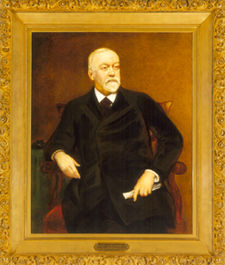 Bristow was upset over not winning the Republican presidential nomination and over the rumor he had been disloyal to President Grant. Bristow retired from politics, never again to run for political office.[1] After 1878 he practiced law in New York City[2] and on October 16 he established the law partnership of Bristow, Peet, Burnett, & Opdyke.[1] Bristow was a prominent leader of the Eastern bar and was elected the second president of the American Bar Association in 1879. Having remained an advocate of civil service reform, Bristow was vice president of the Civil Service Reform Association.[1] Bristow often ably argued in front of the U.S. Supreme Court. In 1896, Bristow suffered appendicitis and died at his home on June 22, 1896.[1] He is buried at Woodlawn Cemetery, Bronx, New York.[8]