Benjamin Harrison V (April 5, 1726 – April 24, 1791), from Charles City County, Virginia, was an American planter and merchant, a revolutionary leader and a Founding Father of the United States. He received his higher education at the College of William and Mary. Harrison was a representative to the Virginia House of Burgesses for Surry County, Virginia (1756–1758, 1785–1786), and Charles City County (1766–1776, 1787–1790). He was a Virginia delegate to the Continental Congress from 1774 to 1777 and, during the Second Continental Congress, was a signer of the Declaration of Independence. Harrison later served as Virginia's fifth governor.[1] His direct descendents include two U.S. Presidents, his son William Henry Harrison and great-grandson Benjamin Harrison.

Harrison was the eldest child of Benjamin Harrison IV and Anne Carter, and a grandson of Robert Carter I. The first Benjamin Harrison is said to have arrived in the colonies around 1630. British historian F. A. Inderwick contends that Benjamin IV is also descended from Thomas Harrison, a participant in the regicide of Charles I, but this is disputed.[2] Benjamin IV and Anne built the manor house at Berkeley Plantation in Virginia and he served as a Justice of the Peace and represented Charles City County in the Virginia House of Burgesses.[3]

Benjamin V, one of ten children, was described in his youth as "tall and powerfully built", with "features that were clearly defined, and a well-shaped mouth above a strong pointed chin".[4] His next younger brother, Carter Henry, became a leader in Cumberland County; two other brothers, Henry and Robert, died young. Brother Nathaniel settled in Prince George County, became sheriff, and was later elected to the House of Burgesses. The youngest brother Charles joined the Continental Army and rose to the rank of brigadier general.[5]

On July 12, 1745, at the age of fifty-one, father Benjamin IV, in the midst of an afternoon thunderstorm, with daughters Lucy and Hannah in hand, attempted to shut an upstairs window, was struck by lightning, and all three were killed.[6] Upon his father's death, Benjamin inherited the bulk, but not all, of his father's estate including the family home Berkeley and a number of surrounding plantations; he also assumed ownership and responsibility for the manor house's equipment, stock and numerous slaves. Benjamin's younger siblings inherited another six plantations, possessions and slaves, as the father chose to depart from the tradition of primogeniture (i.e. leaving the entire estate to the eldest son.)[7]

While Harrison's slaves were sustained by the success of the plantations, their treatment presented a picture consistent with the period. It is known that in the division of slaves among his children, Benjamin's father specifically prohibited any splitting of slave families. The Harrisons also assumed a sense of duty to indoctrinate their slaves in Christianity. There were a number of mulattoes among the slaves Benjamin V inherited; while there is no specific information to show who fathered them, it was particularly common for younger plantation family members and guests, as well as overseers, to invade slave dwellings for carnal reasons. In this light, Benjamin IV's decision to ignore primogeniture subjected his younger children and their slaves to potentially precarious circumstances. There are no known specific instances of abuse by the Harrisons of their slaves, beyond the opprobrious conduct inherent in their claim to ownership of them.[8]

Benjamin V followed his father in representing the counties of Charles City and Surry in the House of Burgesses and also served as a county justice. In 1770 Benjamin was among the first signers of an agreement among Virginia lawmakers and merchants boycotting British imports until the British Parliament repealed its taxes on tea. Harrison also joined in sponsoring a bill that declared certain laws passed by Parliament affecting Virginia to be illegal without the consent of His Majesty's subjects in the colony.[9]

Late in 1773 the famous Boston Tea Party occurred and the British Parliament enacted punitive measures which were called by the colonies Intolerable Acts. On May 24, 1774 Harrison, along with eighty-eight other members of the Virginia Burgesses, signed a new association condemning the action of the Parliament, and agreed to invite other colonies to convene a Continental Congress. On August 5, 1774 Harrison was selected by convention as one of seven delegates to represent Virginia at the Congress. He set out that month, leaving his home state for the first time, and headed to Philadelphia, arriving there on September 2, 1774 for the First Continental Congress.[10]

Harrison gravitated to the older and more conservative of his fellow delegates in Philadelphia, and was more distant with the New Englanders and the more radical, particularly the Adams family. Though describing Harrison variously as "another Sir John Falstaff", "obscene", "profane" and "impious", John Adams in his diary also recalled Harrison as having said that he was so eager to participate in the Continental Congress "he would have come on foot." Their dislike for one another was primarily due to differences in lifestyle and personality. Adams, the lawyer, author and diplomat of Puritan heritage, generally shunned unnecessary things which brought pleasure—like lively food and drink, and a humorous tale—things which Harrison, the rural, corpulent, and exuberant planter, relished. Party factionalism also accounted for the divide; Harrison aligned with John Hancock, and Adams with Richard Henry Lee, whom Harrison had adamantly opposed in the House of Burgesses.[11]

The First Congress, and with it first impressions, concluded the following month in October, with finalization of a Petition to the King, which was signed by all delegates including Harrison, and requested the King's attention to the colonies' grievances and restoration of harmony with the crown.[12] 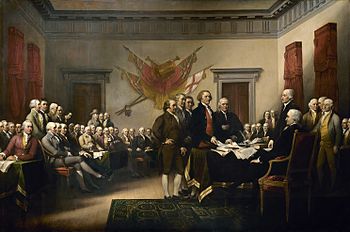 The Second Continental Congress, including Harrison, convened in May of 1775. During the Congress he resided in a house in north Philadelphia with Peyton Randolph and George Washington. He remained there alone after Washington assumed command of the Continental Army and Randolph died. Harrison, in attendance to the session's end in July 1776, served frequently as Chairman of the Committee of the Whole in the Congress, presided over the final debates on the independence resolution offered by Virginia delegate Richard Henry Lee, and presided as well over the debates and amendments to the final Declaration itself.[10]

Harrison was indisputably known for his sense of humor. Even detractor John Adams conceded in his diary that "Harrison's contributions and many pleasantries steadied rough sessions."[14] Indeed, while preparing to sign the Declaration, the rather rotund Harrison famously quipped to Elbridge Gerry, who had taken his place at the table to sign: "I shall have a great advantage over you, Mr. Gerry, when we are all hung for what we are now doing. From the size and weight of my body I shall die in a few minutes and be with the angels, but from the lightness of your body you will dance in the air an hour or two before you are dead."[15]

Harrison would indeed soon witness the Declaration's consequences, both politically and personally. He returned to the re-convening Congress in Philadelphia in November and assumed duties required in the conduct of the war. He, along with a number of other delegates, went to Cambridge with George Washington to plan the continuing, supporting and regulating of the Continental army.[16] Harrison also worked closely with fellow delegates specifically for the defense of South Carolina, New York and Massachusetts.[17] His service was requested as a member of the Committee of Secret Correspondence for the Congress, and also as Chairman of the Board of War during the Revolution. From December of 1776 until March of 1777 the Congress was forced by threat from British forces to remove itself to Baltimore, a location which Harrison did not prefer. A similar relocation was again required the following fall, to Pennsylvania on that occasion.[18]

Harrison found himself at odds with Washington over Marquis de Lafayette's commission, which Harrison insisted was honorary only and without pay. He also created controversy in his endorsement of the rights of Quakers not to bear arms in accordance with their religion. He unsuccessfully argued, throughout the formation of the Articles of Confederation, that Virginia be given greater numerical representation than other states based on population and land mass. Harrison's Congressional membership ended in October 1777 and he returned to Virginia where he quickly renewed his efforts in the House of Burgesses, retaining the Speakership until 1780.[19]

In January of 1781, a British force of 1,600 led by American turncoat Benedict Arnold was positioned at the mouth of the James River and Harrison was called upon to return immediately to Philadelphia and make request for military support in his state. Knowing that Berkeley was one of Arnold's primary targets, Harrison relocated his family before setting out. In Philadelphia his pleas for Virginia were heard, and he succeeded in obtaining increased gunpowder, supplies and troops, but only on a delayed basis. Meanwhile Arnold advanced up the James, wreaking havoc on both sides of the river. Though the Harrison family avoided capture in Arnold's January raid on Berkeley, Arnold ensured that no likeness of the family then in the home would survive, intently removing and burning all family portraits. Most of Harrison's possessions, and a large portion of the house were destroyed. Other signers were similarly targeted, with more horrific consequences.[20] Harrison took up the rehabilitation of his home, then returned to his correspondence with Washington and continued efforts to obtain armaments, troops and clothing supplies for other southern states.[21]

The Virginia Assembly, led in 1781 by Gov. Thomas Jefferson, Speaker Harrison, Thomas Nelson and others encountered difficulties and danger in government affairs similar to those previously experienced at the Congress; advancing British forces led by Banastre Tarleton harassed the Assembly. Gov. Jefferson called a special session of the Assembly in Richmond, but the British threat forced session adjournments westward, first to Charlottesville and then again further to Staunton.[22]

The Yorktown victory in October 1781 provided only brief respite for Harrison, then age 55, who began on November 30 to serve as the fifth Governor of Virginia until 1784. The primary problem he confronted was money—as in other colonies, the coffers of the Virginia treasury were drained by the war and the government was plagued by creditors, both domestic and foreign. It was clear that there was no capacity for military action outside of the immediate area, so Harrison steadfastly opposed offensive action sought against Indians in the Kentucky and Illinois country. He alternatively pursued a policy of treating with the Cherokee, Chickasaw and Creek Indian tribes, which allowed peace to last, at least for the remainder of his term.[23]

Though the treaty in Paris formally ended the Revolutionary War, Harrison struggled with residual incursions by the British militia. Incidents of mutiny in the Continental Army, as well as British prisoners released and at large, posed additional problems for the Governor. As his term approached its end, he continued to lament the persistent debts of the government, which remained beyond his ability to extinguish.

Return to legislature and death

Harrison was delighted to give warm reception to Gen. Washington on his visit to Berkeley in 1784, shortly before the end of his governorship.

In 1788, Harrison participated as a member of the Virginia Ratifying Convention for the Federal Constitution. However, being skeptical of a foreseeably large central government, Harrison, along with Patrick Henry and other men of prominence, opposed the constitution because of the absence of a bill of rights.[24]

Harrison later ran for a seat in the House of Burgesses representing Charles City County, but he was defeated by John Tyler, Sr., the father of the future president John Tyler; not to be deterred, Harrison ran for, and was elected to represent Surry County; he regained his speakership of the House, at the time when that body adopted Thomas Jefferson's Virginia Statute for Religious Freedom. In 1790 he was proposed as a candidate to return to the governorship, but declined in favor of his good friend Beverley Randolph.

He continued his work in the House until his death, in April 1791 at his home Berkeley after a dinner party celebrating his final electoral success.[25] He was buried at the Berkeley Plantation.[26]