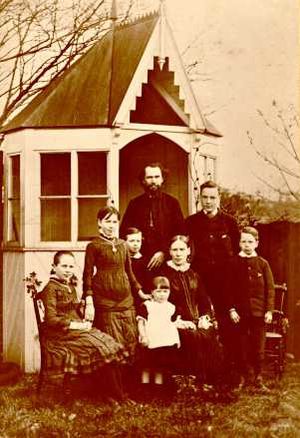 The Reverend Benjamin Waugh (20 February 1839 – 11 March 1908) was a Victorian social reformer and campaigner who founded the UK charity, the National Society for the Prevention of Cruelty to Children (NSPCC) in the late 19th century, and also wrote various hymns.[1]

Waugh was born, the son of a saddler, in Settle, North Yorkshire and attended theological college in Bradford before moving to Newbury, Berkshire and then in 1866 to London.

Working as a Congregationalist minister in the slums of Greenwich, Waugh became appalled at the deprivations and cruelties suffered by children. Critical of the workhouse system, the Poor law and aspects of the criminal justice system as it affected children, he wrote a book (The Gaol Cradle, Who Rocks It?, 1873) urging the creation of juvenile courts and children's prisons as a means of diverting children from a life of crime. He also served on the London School Board from 1870 to 1876.

He was also, from 1874 to 1896, editor of a religious periodical, The Sunday Magazine, in which he published several of his own hymns, among which is "Now let us see thy beauty, Lord", which has appeared in several editions of the Methodist Hymn Book, in Congregational Praise and in the Australian Hymnbook, though not in its successor, Sing Alleluia.

In 1884, he founded the London Society for the Prevention of Cruelty to Children (echoing a similar initiative in Liverpool), launched at London's Mansion House on 8 July. The London body's first chairman was veteran social reformer Earl Shaftesbury. It evolved to become the NSPCC some five years later (14 May 1889), with Waugh as its first director and Queen Victoria as its first patron.

Waugh lived in a house in Croom's Hill, Greenwich, and at 53 Woodlands Villas (today Vanbrugh Park) in the nearby Blackheath Standard area. He later retired, in 1905, to Westcliff in Southend, Essex, where he died three years later. A Greater London Council blue plaque marks Waugh's residence at Croom's Hill.[2]