The Bentley Mulsanne is a luxury car produced by Bentley Motors Limited in the United Kingdom.[4] The car is named after the Mulsanne Corner of the Le Mans racing circuit, Bentley cars having won six victories at the 24 Hours of Le Mans in the past.

Bentley has brought back the Mulsanne nameplate that was last used in 1992, and this model replaces the Bentley Arnage. The new Mulsanne was unveiled at the 2009 Pebble Beach Concours d'Elegance, on 16 August 2009. Coupe and convertible variants are expected to follow at some point as replacements for the Arnage-based Brooklands and Azure respectively.[5]

Like the Arnage, the Mulsanne retains the 6.75 L (6750 cc/411 in³) OHV V8 engine, modified to meet Euro V emissions regulations. The engine is lighter and features cylinder de-activation and variable cam phasing to improve fuel efficiency.[6] Unlike the less expensive Bentley Continental Flying Spur and Bentley Continental GT, the Mulsanne shares fewer components with other marques in the Volkswagen Group.[7]

The Mulsanne is the first flagship car to be independently designed by Bentley Motors in nearly 80 years; the last being W.O. Bentley's 8 litre model in 1930.[8] Afterward, most Bentleys shared platforms with Rolls-Royce cars.[7]

The rear is a modernised version of the 2006 Azure. 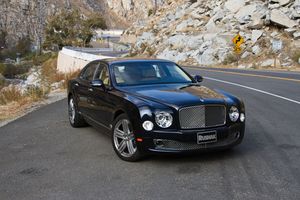 Features include stainless steel knobs on the dashboard that control the vent plungers are electronic micro switches that control electric servos. The feedback remains that of a metal rod to control the damper.[15]

Customers have a choice of 114 paint colors, 21 carpet colors, nine wood veneers, and 24 interior leather hides, as well as specify a custom color scheme. The rear seating area may be configured to accommodate either 2 or 3 passengers. Optional is a Naim 2200 watt audio system with MP3, Bluetooth, and an MMI capability.

The 2013 enhanced Mulsanne was unveiled in 2013 Geneva International Motor Show.[17]

It is a concept vehicle based on Bentley Mulsanne, with convertible body,[25] that was privately shown at the 2012 Pebble Beach Concours d'Elegance.

The vehicle was unveiled in Beijing International Automotive Exhibition in Sanlitun district.[26]

It is a limited version (48 units per model) of Mulsanne for North American market, commemorating Bentley's six victories at the 24 Hours of Le Mans. Each car includes a unique Le Mans Edition numbered badge, Le Mans Edition clock face, embroidered Le Mans badge to each headrest, tread plates with the limited edition name, unique Le Mans Edition wheels and specific interior veneers and exterior colours. The vehicles were made in 6 models, named after the winning drivers:

The vehicle was unveiled in 2013 Pebble Beach Concours d'Elegance.[30]

It is a limited (22 units) version of Bentley Mulsanne with Mulliner Driving Specification and Entertainment Specification for European market, inspired by Sir Henry ‘Tiger’ Tim Birkin. Changes include a choice of 2 body colour schemes (Ghost White and Damson, Fountain Blue and Dark Sapphire), numbered door sill plaques, a unique 21-inch wheel design inspired by those on the original Mulsanne concept car, a 3D 'Flying B' logo stitched into the vehicle headrests and inlaid into the wood of the front fascia and rear picnic tables, a tailored luggage set individually numbered and matched with the interior of each car.[52][53]

This new Speed model offers even greater performance and more premium features compared to a standard Bentley Mulsanne. Under the bonnet is a 6.75-litre twin-turbocharged V8 petrol engine that produces 530 bhp. This gives the saloon a 0-62 mph sprint time of just 4.9 seconds, which is 0.4 seconds faster than a standard Mulsanne. Meanwhile, the top speed is increased from 184 mph to 190 mph.[54]

Each car takes nine to twelve weeks to produce.[55]

Mulsanne competed in the 2012 Goodwood Festival of Speed hill climb.[60]