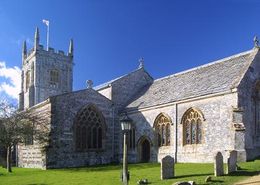 Bere Regis /ˈbɪər ˈriːdʒᵻs/) is a village and civil parish in the Purbeck district of Dorset, England, situated 6 miles (9.7 km) north-west of Wareham. In the 2011 census the civil parish had a population of 1,745.

The village has one shop, a post office and two pubs, The Royal Oak and The Drax Arms. The parish church is St. John the Baptist Church. The village features in the Domesday Book.

The original settlements in the parish were Shitterton, Bere Regis village and Dodding's Farm, which are all sited by the Bere or Milborne Stream. Later settlements were small farms in the Piddle Valley to the south, first recorded between the mid 13th and mid 14th centuries.[2]

Edward I made Bere Regis a free borough and it was an important market town for a long period, though all domestic buildings built before 1600 have since been destroyed by serious fires in the 17th, 18th and 19th centuries.[2]

Bere Regis is in an electoral ward that bears its name and includes neighbouring Bloxworth. The ward population in the 2011 census was 1,945.[3] The ward forms part of the parliamentary constituency of Mid Dorset and North Poole. Its Member of Parliament since 2001 is the Liberal Democrat Annette Brooke.

Bere Regis village is sited by the side of the small Bere River or Bere Stream, a tributary of the River Piddle, where the chalk of the Dorset Downs, to the north, dips beneath newer deposits of clay, sands and gravels.[5] The village is situated at the western terminus of the A31 road (Guildford - Bere Regis), where it joins the A35 (Southampton - Honiton), although both roads now bypass the village. The local travel hubs are Wareham railway station, 6 miles (9.7 km) from the village, and Bournemouth Airport, 17 miles (27 km) away.

To the south-east of the village a large conifer plantation, Wareham Forest, stretches several miles to Wareham. To the west is Dorchester, north is Blandford Forum and east is Bournemouth. Further to the south is the chalk ridge of the Purbeck Hills, and 10 miles (16 km) to the south is the Jurassic Coast, a World Heritage Site on the English Channel.

Having suffered extensive fires throughout its history, including the most serious in 1777, the village has lost many of its older buildings. There is, however, a selection of Georgian and Victorian buildings. The nearby hamlet of Shitterton, protected by the Bere River from the fires, still retains an extensive selection of older buildings, predominantly thatch. Amongst them is the oldest residential building in the parish; the 550-year-old Honeycombe Cottage.

The oldest parts of the parish church of St John Baptist are of the 12th century, but additions were made in the following three centuries. The tower is built of stone-and-flint chequerwork, and the timber roof of the nave is said to have been the gift of Cardinal John Morton. Features of interest include the arcades, some 16th-century seating and a number of Purbeck marble monuments. The Victorian and later stained glass is of poor quality.[6] 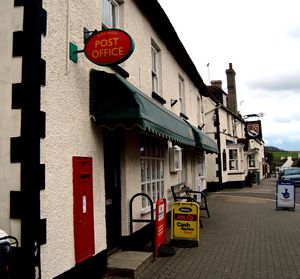 The village has one village school: Bere Regis First School. This is a mixed primary school for children aged 4–10.

Bere Regis has an active village sports club and playing fields which can be used for different sports.

Bere Regis is twinned with: