From Infogalactic: the planetary knowledge core
Jump to: navigation, search
This article is about the city in Italy. For the province, see Province of Bergamo. For other uses, see Bergamo (disambiguation).

listen (help·info)) is a city in Lombardy, Italy. It is situated about 40 km (25 mi) northeast of Milan and 30 km (19 mi) from the lakes Como and Iseo. The foothills of the Bergamo Alps begin immediately north of the town.

Bergamo is the seat of the Province of Bergamo. With a population of around 120,000, Bergamo is the fourth-largest city in Lombardy. The metropolitan area of Bergamo extends beyond the administrative city limits, spanning over a densely urbanized area with slightly less than 500,000 inhabitants.[1]
This area is itself part of the broader Milan metropolitan area, home to over 8 million people.[2][3][4]

Bergamo is well connected to several cities in Europe and the Mediterranean through Il Caravaggio International Airport, the fourth-busiest airport in Italy with almost nine million passengers in 2014, and the motorway A4 stretching on the axis between Milan, Verona, and Venice.

As of 2012, Bergamo is the second most visited city in Lombardy after Milan.[5]

Bergamo occupies the site of the ancient town of Bergomum, founded as a settlement of the Celtic tribe of Cenomani. In 49 BC it became a Roman municipality, containing c. 10,000 inhabitants at its peak. An important hub on the military road between Friuli and Raetia, it was destroyed by Attila in the 5th century.

From the 6th century Bergamo was the seat of one of the most important Lombard duchies of northern Italy, together with Brescia, Trento, and Cividale del Friuli: its first Lombard duke was Wallaris. After the conquest of the Lombard Kingdom by Charlemagne, it became the seat of a county under one Auteramus (d. 816). An important Lombardic hoard dating from the 6th to 7th centuries AD was found in the vicinity of the city in the nineteenth century and is now in the British Museum.[6]

From the 11th century onwards, Bergamo was an independent commune, taking part in the Lombard League which defeated Frederick I Barbarossa in 1165. The local Guelph and Ghibelline factions were the Colleoni and Suardi, respectively. Feuding between the two initially caused the family of Omodeo Tasso to flee north c. 1250, but he returned to Bergamo in the later 13th century to organize the city's couriers: this would eventually lead to the Imperial Thurn und Taxis dynasty generally credited with organizing the first modern postal service. From 1264, Bergamo was intermittently under the rule of Milan. In 1331, it gave itself to John of Bohemia, but the Milanese Visconti reconquered it.

After a short conquest by the Malatesta in 1407, in 1428 it fell under the control of the Venetian Republic, remaining part of it until 1797. Between 1797 and 1815, Bergamo and its territory were included in the political entities born in North Italy during the French and Napoleonic dominion. Notably, the Venetians fortified the higher portion of the town (see Main sights section).

In 1815, it was assigned to the Austrian Empire. Giuseppe Garibaldi freed it in 1859 during the Second Italian War of Independence, when Bergamo became part of the Kingdom of Italy. For its contribution to "Il Risorgimento" the city is also known as "Città dei Mille" ("City of the Thousand"). During the 20th century Bergamo became one of Italy's most industrialized cities. It is also one of the few Italian cities that did not suffer major destruction during World War II.

Bergamo experiences a humid subtropical climate (Köppen climate classification Cfa) characteristic of Northern Italy.[citation needed] While most of Italy is characterized by dry summers with little to no precipitation, Bergamo has the reverse trend; the summer is wetter than winter.[citation needed] However, Bergamo's climate is designated with an f because there is statistically significant rainfall throughout the winter (in order to qualify for a w precipitation designation under the Köppen scale, the driest month in the winter would need to have less than 12.95 mm (1 in).)

The Palazzo della Ragione and the Piazza Vecchia

The town has two centres: "Città alta" (upper city), a hilltop medieval town, surrounded by 16th-century cyclopic defensive walls, and the "Città bassa" (lower city). The two parts of the town are connected by funicular/cable car, roads, and foot-paths. Parking spaces are very limited in the upper city. 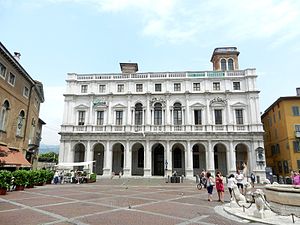 The Angelo Mai Library on the Piazza Vecchia 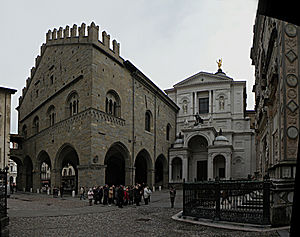 The upper city, surrounded by Venetian walls built in the 16th century, forms the historic centre of Bergamo.[10] Città Alta is an extremely expensive place to live in, with properties being sold for five to twelve thousand euro per square meter. This has numerous places of interest including: 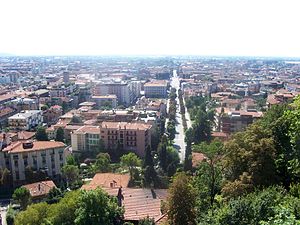 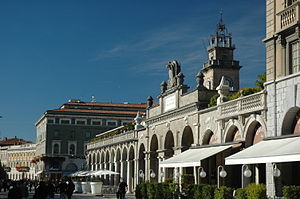 The lower city is the modern centre of Bergamo. At the end of the 19th century Città Bassa was composed of residential neighborhoods built along the main roads that linked Bergamo to the other cities of Lombardy. The main boroughs were Borgo Palazzo along the road to Brescia, Borgo San Leonardo along the road to Milan and Borgo Santa Caterina along the road to Valle Seriana. The city rapidly expanded during the 20th century. In the first decades, the municipality erected major buildings like the new courthouse and various administrative offices in the lower part of Bergamo in order to create a new center of the city. After World War II many residential buildings were constructed in the lower part of the city which are now divided into several neighborhoods such as Longuelo, Colognola, Malpensata and Boccaleone, Redona and Valtesse among many others. The shopping district developed shortly after, now commonly known as the street the shops are located on Via 20 Settembre. The church "Santo Spirito" exhibits the altarpiece by Lorenzo Lotto "Madonna and Child with Saints". The most relevant sites are:

In 2010, 85% of the population was Italian. The largest immigrant group comes from other European nations (the largest being Romania and Ukraine): 4.89%, Americas (mostly from Cochabamba, Bolivia): 4.61%, sub-saharan Africa: 1.59%, and North Africa: 1.53%. Currently one-fifth of the babies born in Bergamo has at least one foreign parent. The city is predominantly Roman Catholic and also host the see of a Diocese of Bergamo, but due to immigration now has some Orthodox Christian, Muslim, and Protestant adherents. 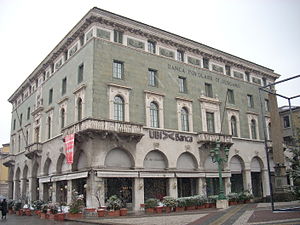 As capital and main town of its province, Bergamo hosts the public administration offices of provincial interest. In the past, many factories were in the commune territory, mainly for electrical components, industrial mechanics and publishing businesses, but have then moved outward. In the town three large corporations are still based: 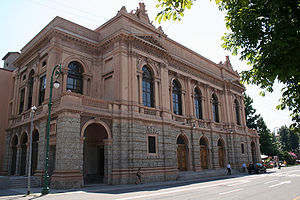 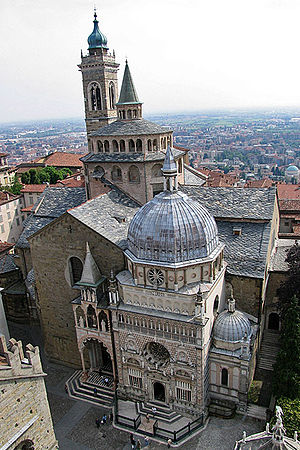 Bergamo has a prominent place in music history. The large Romanesque church of Santa Maria Maggiore, begun in 1137, had a continuous and well-documented tradition of music teaching and singing for more than eight hundred years. When the town was under Venetian control, the musical style of the Venetians was imported as well; in particular, a large instrumental ensemble grew up to support the choral singing. Composers such as Gasparo Alberti produced music with polyphony using two organs, brass and viols, a style usually associated with Venice, but which flourished in the fine acoustic environment of Santa Maria Maggiore.

The city lent its name to a style of folk dance known as bergamask peculiar to the peoples of that region. Known as bergomasci and renowned for their buffoonery, the fool Bottom in Shakespeare's A Midsummer's Night's Dream refers to their Bergomask dance. This unconventional form gave Debussy a vehicle for the dissonances and irregular intervals of his "Suite bergamasque".

Prominent musicians born in Bergamo include Gaetano Donizetti, Pietro Locatelli, Antonio Lolli, Gianluigi Trovesi, Roby Facchinetti, Alfredo Piatti, Fabrizio Frigeni and Gianandrea Gavazzeni. Alessandro Grandi, one of the most progressive composers of the early 17th century after Monteverdi, was maestro di cappella there until his death in the plague of 1630; Tarquinio Merula, an even more progressive composer, and one of the founders of the early sonata, took over his post.

Bergamo was the hometown and last resting place of Enrico Rastelli, a highly technical and world famous juggler who lived in the town and, in 1931, died there at the early age of 34. There is a life-sized statue to Rastelli within his mausoleum. A number of painters were active in the town as well; among these were Giovanni Paolo Cavagna, Francesco Zucco, and Enea Salmeggia, each of whom painted works for the church of Santa Maria Maggiore. Sculptor Giacomo Manzù and the bass-baritone opera singer Alex Esposito[12] were born in Bergamo. The famous American electrical engineer and professor Andrew Viterbi, inventor of the important Viterbi's algorithm, was born in Bergamo, before migrating in USA during the fascism because of his Jewish origin. Designers born in Bergamo include the late Mariuccia Mandelli, the founder of Krizia and one of the first female fashion designers to create a successful line of men's wear.[13] 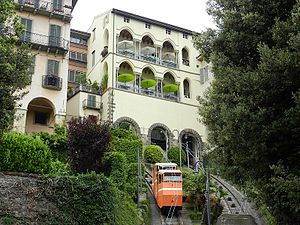 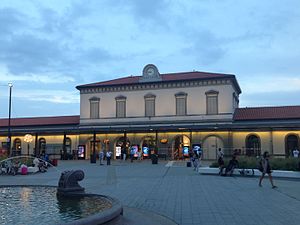 Motorway A4 is the main axis connecting the city with the east and the west of the country, to cities such as Milan, Turin, Venice and Trieste.

Bergamo railway station is connected with the rest of Lombardy by trains for Milan, Lecco, Cremona, Treviglio, Brescia and Monza. Railway service is operated by Trenord and TiLo.

Bergamo is twinned with:[14]

Bergamo has a partnership with:

Bergamo is home to the following consulates: