Berke Khan (died 1266) (also Birkai; Mongolian: Бэрх хаан, Tatar: Бәркә хан) was the ruler of the Golden Horde (division of the Mongol Empire)[1] who effectively consolidated the power of the Blue Horde and White Hordes[2] from 1257 to 1266. He succeeded his brother Batu Khan of the Blue Horde (West) and was responsible for the first official establishment of Islam in a khanate of the Mongol Empire.[3] He allied with the Egyptian Mamluks against another Mongol khanate based in Persia, the Ilkhanate. Berke supported Ariq Böke in the Toluid Civil War, but did not intervene militarily in the war.

Berke is a name used by both Turkic peoples and Mongols. In the Mongolian language "Berkh" literally means "strong". "Berk" also has many meanings like "solid", "powerful", and "in power" in the Old Turkic language.

Berke was one of the sons of Jochi, the eldest son of Genghis Khan. Berke was present, with several of his brothers, at the inauguration of his uncle Ögedei as Great Khan in 1229.

In 1236, Berke joined his brothers Orda, Sinkur, and Siban and an assortment of cousins under the leadership of Batu Khan. The vast army, comprising some 150,000 soldiers, marched from Siberia and into the territory of the Muslim Volga Bulgars and Kipchaks, whom they subdued. Batu and Subutai sent Berke to the country north of the Caucasus to conquer the Kipchaks there. Next they devastated the principalities of Ryazan and Suzdal in 1237, and marched further into Russia. During the winter of 1238-39, Berke defeated the Kipchaks and imprisoned the chief of the Merkits. He afterwards subdued the steppe watered by the Kuma and the Terek.

Berke further served under his brother during the invasion of Europe, fighting at the Battle of the Mohi, where the Hungarian army was decimated. When Ögedei Khan died, and all the princes of the blood were summoned to return to Mongolia to select a Great Khan, Berke and his brothers joined Batu in his bid for power. When that failed, the Kipchak Khanate settled on the territories, which are now parts of Russia and Kazakhstan, and looked east to defend themselves against their cousins.

Berke Khan adopted Islam in the city of Bukhara. When he was at Saray-Jük, Berke met a caravan from Bukhara and questioned them about their faith. Berke was convinced to convert by the caravan travellers and became a Muslim. Berke then persuaded his brother Tukh-timur to convert to Islam as well.

In 1248 Batu sent Berke, along with his brother Tukh-timur, to Mongolia in order to install Möngke Khan on the throne of Great Khan. When he arrived, he invited the Chagatai and Ogedeyd families several times. That is why, Berke conducted the kurultai in 1251 and had Möngke enthroned. Berke organized everything under strict conditions. 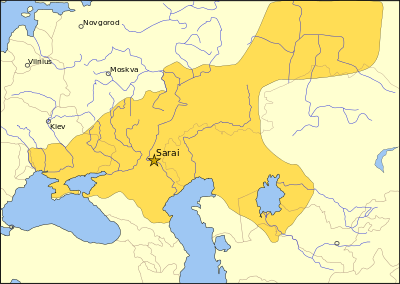 When Batu died in 1255, he was briefly succeeded by his son Sartak, before Berke assumed leadership in 1257. He was an able ruler and succeeded in maintaining and stabilizing the Golden Horde, western khanate of Mongol Empire. During his government, the Mongols finally defeated the rebellion of Danylo of Halych and made a second attack against Poland and Lithuania, led by general Burundai (Lublin, Zawichost, Sandomierz, Kraków and Bytom were plundered) in 1259. Also in 1265 there was a raid against Bulgaria and Byzantine Thrace. Michael of Byzantine Empire also sent much valuable fabric to the Golden Horde as a tribute thereafter.

Berke soon became a devout Muslim. His conversion resulted in the Blue Horde becoming primarily Muslim, although there were still animists and Buddhists among them. Berke had a deadly determination to deal with Hulagu Khan, who had murdered the Caliph Al-Musta'sim, and whose territorial ambitions in Syria and Egypt threatened Berke's fellow Muslims.

In the meantime, the Ilkhanates led by Kitbuqa had fallen out with the crusaders holding the coast of Palestine, and the Mamluks were secured a pact of neutrality with them, pass through their territory, and destroy the Ilkhanate army at the Battle of Ain Jalut. Kitbuqa was killed. Palestine and Syria were permanently lost, the border remaining the Tigris for the duration of Hulagu's dynasty. Berke's vow of vengeance against Hulagu had to wait until the latter's return to his lands after the death of Möngke Khan.

Hulagu returned to his lands by 1262, but instead of being able to avenge his defeats, was drawn into civil war with Berke and the Blue Horde. Berke Khan had promised such a defeat in his rage after Hulagu's sack of Baghdad.

Muslim historian Rashid-al-Din Hamadani quoted Berke Khan as telling his Mongols and Muslim subjects, in protest at the attack on Baghdad:

"He (Hulagu) has sacked all the cities of the Muslims, and has brought about the death of the Caliph. With the help of God I will call him to account for so much innocent blood." (see The Mongol Warlords, quoting Rashid al-Din's record of Berke Khan's pronouncement; this quote is also found in The Mamluk-Ilkhanid War)

Before his succession, he also complained to Batu "We helped Möngke to enthrone. But he forgot who the enemy is or friend is. Now, he is starving the lands of our friend Caliph. It is abject". It is notable that Berke Khan kept his promise, allying himself with the Mamluks, (Berke sought an alliance with the Mamluk sultan Baibars against Hulagu) and when Hulagu returned to his lands in 1262, after the succession was finally settled with Kublai as the last Great Khan, and massed his armies to avenge Ain Jalut and attack the Mamluks, Berke Khan initiated a series of raids in force which drew Hulagu north to meet him. This was the first open conflict between Mongols, and signalled the end of the unified empire.

But the reasons for the conflict between Berke and Hulagu was not only religion. It was territory. Möngke Khan gave Azerbaijan, which had been given to Jochi by Genghis Khan, to his brother Hulagu. Although Berke did not like the situation, he was patient till Möngke's death.

Berke at first desisted from fighting Hulagu out of Mongol brotherhood, he said Mongols are killed by Mongol swords. If we were united, then we would have conquered all of the world. but the economic situation of the Golden Horde due to the actions of the Ilkhanate led him to declare jihad because of the Ilkhanids domination of the wealth of North Iran, and the Ilkhanate's demands for the Golden Horde to not sell slaves to the Mamluks.[4]

In 1262 the conflict turned into open war. Hulagu Khan suffered a severe defeat in an attempted invasion north of the Caucasus in 1263. Hulagu's forces were crushed at the Terek river by Berke's nephew Nogai, forcing Hulagu into retreat; he died in 1265. Also Chagatai Khan Alghu invaded Khwarizm and annexed Golden Horde lands. Jochid army unsuccessfully tried to halt his advance.

Berke also supported Great Khan claimant Ariq Böke in the Toluid Civil War, and he minted coins in the name of Ariq Böke. However Kublai defeated Ariq Böke by 1264. Kublai called both Hulagu and Berke to discuss Ariq Böke. However, both of them noted that they could not come to the Kurultai at the moment, and the new Kurultai was never held.

As Berke sought to cross the Kura river to attack Hulagu's son, Abaqa Khan, he fell ill and died sometime between 1266 and 1267.[5] He was succeeded by his grandnephew, Mengu-Timur. The policy of alliance with the Mamluks, and containment of the Ilkhanate, was continued by Mengu-Timur. Many historians[6] are in agreement that the intervention by Berke against Hulagu saved the remainder of the "Holy Land", including Mecca and Jerusalem, from the same fate as Baghdad.