From Infogalactic: the planetary knowledge core
Jump to: navigation, search
For the castle of the same name in West Virginia in the United States, see Samuel Taylor Suit Cottage.
File:Berkeley Castle - geograph.org.uk - 1440403.jpg
Berkeley Castle in 2009, viewed from the southwest

Berkeley Castle (historically sometimes spelt Berkley Castle) is a castle in the town of Berkeley, Gloucestershire, UK (grid reference ST685989). The castle's origins date back to the 11th century and it has been designated by English Heritage as a grade I listed building.[1]

The castle has remained within the Berkeley family since they reconstructed it in the 12th century, except for a period of royal ownership by the Tudors. It is traditionally believed to be the scene of the murder of King Edward II in 1327.[2][3]

The first castle at Berkeley was a motte-and-bailey, built around 1067 by William FitzOsbern shortly after the Conquest.[4] This was subsequently held by three generations of the first Berkeley family, all called Roger de Berkeley, and rebuilt by them in the first half of the 12th century.[5] The last Roger de Berkeley was dispossessed in 1152 for withholding his allegiance from the House of Plantagenet during the conflict of The Anarchy, and the feudal barony of Berkeley was then granted to Robert Fitzharding, a wealthy burgess of Bristol and supporter of the Plantagenets. He was the founder of the Berkeley family which still holds the castle.[4][6][7][8]

In 1153–54, Fitzharding received a royal charter from King Henry II giving him permission to rebuild the castle,[8] with the aim of defending the Bristol – Gloucester Road, the Severn estuary, and the Welsh border.[citation needed] Fitzharding built the circular shell keep during 1153–56, probably on the site of the former motte. The building of the curtain wall followed, probably during 1160–90 by Robert and then by his son Maurice.[4][8]

Much of the rest of the castle is 14th century and was built for Thomas de Berkeley, 3rd Baron Berkeley: Thorpe's Tower, to the north of the keep, the inner gatehouse to its southwest, and other buildings of the inner bailey.[4] 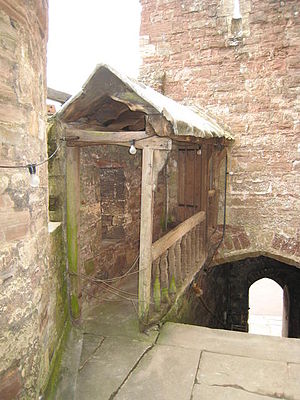 The castle was ransacked in 1326 by the forces of Hugh Despenser, the favourite of Edward II. Then in 1327, Edward was deposed by his wife Queen Isabella and her ally Roger Mortimer, and placed in the joint custody of Thomas de Berkeley and his brother-in-law John Maltravers. They brought Edward to Berkeley Castle, and held him there for five months from April to September. During that time a band of Edward's supporters attacked, entered the castle and rescued him, only for him to be recaptured soon afterwards. It is possible that his captors then moved him around between several castles to make further rescue more difficult, before returning him to Berkeley Castle in September.[9]:115–126 Some commentators have claimed that Edward's escape was actually successful, and that someone else was later murdered in his place.[3][9]:224–5

Edward was reputedly murdered there on September 21, 1327 by unknown means, although popular stories of a red hot poker or suffocation persist.[3] The cell where he is supposed to have been imprisoned and murdered can still be seen, along with the adjacent 11 m (36 ft) deep dungeon,[1] which supposedly echoes the events of the murder every year on September 21.[10]

The account given to Parliament at the time was simply that Edward had met with a fatal accident. The body was embalmed and remained lying in state at Berkeley for a month, in the Chapel of St John within the castle keep, before Thomas de Berkeley escorted it to Gloucester Abbey for burial.[4][9]:133–8 Thomas was later charged with being an accessory to the murder, but his defence was that it was carried out by the agents of Roger Mortimer while he was away from the castle, and in 1337 he was cleared of all charges.[9]:164–6

In the 14th century, the Great Hall was given a new roof and it is here the last court jester in England, Dickie Pearce, died after falling from the Minstrels' gallery. His tomb is in St Mary's churchyard which stands besides the castle. Adjoining the Great Hall is one of two of the original chapels, that includes painted wooden vaulted ceilings and a biblical passage, written in Norman French. This room also contains an illustrated vellum book of plainsong that was used in Catholic rites, before the family converted to Protestantism in the 16th century.

During the English Civil War, the castle still held sufficient significance for it to be captured in 1645 by Colonel Thomas Rainsborough, for the Parliamentarian side and after a siege which saw cannon being fired at point blank range from the adjacent church roof of Saint Mary the Virgin, the Royal garrison surrendered. As was usual, the walls were left breached after this siege but the Berkeley family were allowed to retain ownership on condition that they never repaired the damage to the Keep and Outer Bailey, still enforced today by the original Act of Parliament drawn up at the time; according to the Pevsner Architectural Guides,[11] the breach is partially filled by a subsequent 'modern' rebuild, but this only amounts to a low garden wall, to stop people falling 28' from the Keep Garden, the original Castle's "motte".

In the early 20th century Randal Thomas Mowbray Berkeley, 8th Earl of Berkeley, repaired and remodelled parts of the castle and added a new porch in the same Gothic style as the rest of the building. One change included an Art Nouveau take on a medieval bedroom.

The castle is surrounded by terraced gardens, including Elizabeth I's bowling green and a pine that is reputed to have been grown from a cutting taken from a tree at the Battle of Culloden in 1746.

The castle is the oldest continuously occupied castle in England after the royal fortresses of the Tower of London and Windsor Castle, and the oldest to be continuously owned and occupied by the same family. It contains an antique four-poster bed that has been identified as the piece of furniture that has remained in continuous use by the same family the longest in the UK.[12] The Berkeley family divide their time between the Castle and their other home, Spetchley Park, just outside Worcester, which has been in the family's ownership since 1606.[citation needed]

With most areas open to the public since 1997, the private apartments occupy about 15% of the building and the rest is managed by the Berkeley Castle Charitable Trust.[citation needed] A restoration appeal was launched in 2006 to raise £5.5 million needed to renovate and restore the Norman building.[13]

Two ships of the Royal Navy have been named Berkeley Castle after the castle,[14] as has a Great Western locomotive.[15]

The castle was used for many scenes for the hit BBC children's television series The Ghost Hunter[citation needed] and the first televised version of The Other Boleyn Girl.[16] More recently the castle and grounds have been used for the external shots of the Valencian castle in Galavant[17] including scenes with Vinnie Jones, Joshua Sasse, Ricky Gervais and Luke Youngblood.