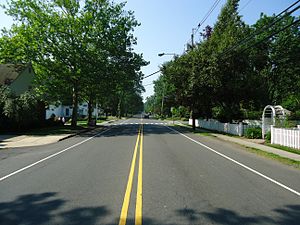 Berkeley Heights was originally incorporated as New Providence Township by the New Jersey Legislature on November 8, 1809, from portions of Springfield Township, while the area was still part of Essex County. New Providence Township became part of the newly formed Union County at its creation on March 19, 1857. Portions of the township were taken on March 23, 1869, to create Summit, and on March 14, 1899, to form the borough of New Providence. On November 6, 1951, the name of the township was changed to Berkeley Heights, based on the results of a referendum held that day.[21] The township was named for John Berkeley, 1st Baron Berkeley of Stratton, one of the founders of the Province of New Jersey.[22]

The Lenape Native Americans were known to inhabit the region, including the area now known as Berkeley Heights, dating back to the 1524 voyage of Giovanni da Verrazzano to what is now the lower New York Bay.

The earliest construction in Berkeley Heights began in an area that is now part of the 1,960 acres (7.9 km2) Watchung Reservation, a Union County park that includes 305 acres (1.23 km2) of the township.[28]

The first European settler was Peter Willcox, who received a 424 acres (1.72 km2) land grant in 1720 from the Elizabethtown Associates. This group bought much of northern New Jersey from the Lenape in the late 17th century. Willcox built a grist and lumber mill across Green Brook.[29]

In 1845, Willcox's heirs sold the mill to David Felt, a paper manufacturer from New York. Felt built a small village around the mill aptly named Feltville. It included homes for workers and their families, dormitories, orchards, a post office and a general store with a second floor church.[29] 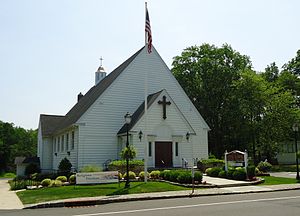 In 1860, Feltville was sold to sarsaparilla makers. Other manufacturing operations continued until Feltville went into bankruptcy in 1882. When residents moved away, the area became known as Deserted Village. Village remains consist of seven houses, a store, the mill and a barn. Deserted Village is listed on the National Register of Historic Places and is undergoing restoration by the Union County Parks Department. Restoration grants of almost $2 million were received from various state agencies.[30] Deserted Village, in the Watchung Reservation, is open daily for unguided walking tours during daylight hours.

Due to confusion between the adjacent municipalities of the Borough of New Providence and the Township of New Providence, the township conducted a referendum in 1952 and voted to change the name to Berkeley Heights Township. The origin of the township's name has never been fully established, but is believed to have been taken from an area of town that was referred to by this moniker, which itself was assumed to be derived from Lord John Berkeley, who was co-proprietor of New Jersey from 1664 to 1674.[31]

Early life in Berkeley Heights is documented in the Littell-Lord Farmhouse Museum & Farmstead (31 Horseshoe Road in Berkeley Heights), an 18-acre (73,000 m2) museum surrounding two houses, one of which was built in the 1750s and the other near the start of the 19th century.

Among the exhibits are a Victorian master bedroom and a Victorian children's room, furnished with period antiques. The children's room also has reproductions of antique toys, which visitors can play with. The museum, which is on the National Register of Historic Places, also includes an outbuilding that was used as a summer kitchen, a corn crib dating to the 19th century and a spring house built around a spring and used for refrigeration.[32] The museum is open 2-4 p.m. on the third Sunday of each month from April through December, or by appointment.

The township owes its rural character to its late development. Until 1941, when the American Telephone and Telegraph Company built the AT&T Bell Laboratories research facility in the township, it was a sleepy farming and resort community.[29]

Berkeley Heights is host to a traditional religious procession and feast carried out by members of Our Lady of Mt. Carmel Society. The feast is capped by one of the largest fireworks shows in the state. The Feast of Mt. Carmel has been a town tradition since 1909.[33]

Another early Berkeley Heights community of note is the 67-acre (270,000 m2) Free Acres, established in 1910 by Bolton Hall, a New York entrepreneur and reformer who believed in the idea of Henry George, the economist, of single taxation, under which residents pay tax to the community, which, in turn, pays a lump sum to the municipality. Among the early residents of Free Acres were the actor James Cagney and his wife, Billie.[29]

Residents of Free Acres pay tax to their association, which maintains its streets and swimming pool, approves architectural changes to homes and pays a lump sum in taxes to the municipality.[29]

According to the United States Census Bureau, the township had a total area of 6.266 square miles (16.229 km2), including 6.211 square miles (16.087 km2) of land and 0.055 square miles (0.142 km2) of water (0.88%).[1][2] Certain portions of Berkeley Heights are located in various flood zones. Residential homes, as well as some commercial areas along Berkeley Heights’ downtown Springfield Avenue area, have been known to be completely submerged in poor weather.[35]

The township is located partially on the crest of the Second Watchung Mountain and in the Passaic River Valley, aptly named as the Passaic River forms the township's northern border. Berkeley Heights is located in northwestern Union County, at the confluence of Union, Morris, and Somerset Counties. Berkeley Heights is bordered by New Providence and Summit to the east, Scotch Plains to the southeast, Chatham to the north, Watchung to the south, and Warren Township and Long Hill Township to the west.

Downtown Berkeley Heights is located along Springfield Avenue, approximately between the intersections with Plainfield Avenue and Snyder Avenue. In addition, a post office, the Municipal Building, police station, train station, Walgreens, Stop & Shop and other shops and services are located in this downtown section.

A brick walk with personalized bricks engraved with the names of many long-time Berkeley Heights residents runs from near the railroad station towards the planned New York Marts grocery store. A memorial to the victims of the September 11 terrorist attacks adjoins a wooded area alongside Park Avenue, just southwest of downtown.[37]

Certain portions of Berkeley Heights are located in flood zones. Residential homes, as well as some commercial areas along the downtown Springfield Avenue area, are impacted by flooding.[38] 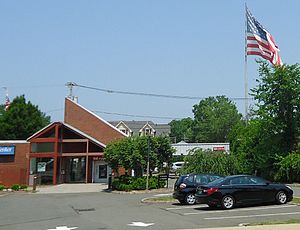 Berkeley Heights is home to the Murray Hill Bell Labs headquarters of Alcatel-Lucent. The transistor, solar cell, and laser were invented in this facility when it was part of AT&T. 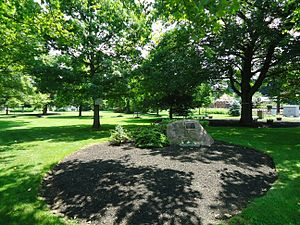 Peppertown park near the train station 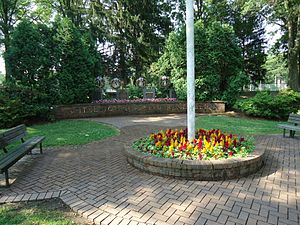 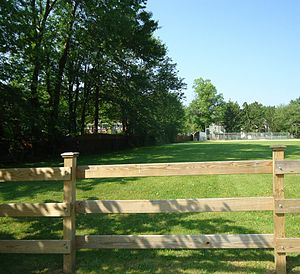 Located in Berkeley Heights are many municipal parks, including the largest one, Columbia Park (located along Plainfield Avenue). Columbia Park boasts tennis courts, two baseball fields, basketball courts, and a large children's play area. It is operated by the Recreation Commission. In addition to those located at each of the schools, athletic fields are located along Horseshoe Road (Sansone Field) and along Springfield Avenue (Passaic River Park). 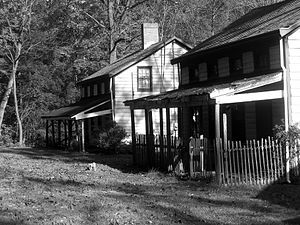 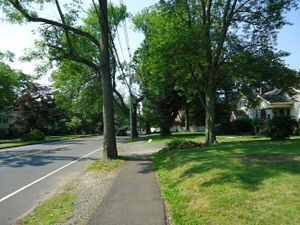 In the 2006 election, the Republican nominees were David Cohen for mayor, Louis DiPasquale and John Haddad for three-year terms on the Council, Elaine Perna and Joseph Bruno for two-year Council terms, and David Ronner and Thomas Pirone for one-year terms. The Democrats did not run a mayoral candidate, but did field four Township Council candidates: Thomas Battaglia and Charles Hasz for three-year terms, Alexandra Chirinos for a two-year term, and John Bonacci for a one-year term. In addition, John Miller ran for mayor as an independent write-in candidate. Cohen won the election for mayor. The race between Battaglia and Haddad was very close; in a recount, Battaglia won by 10 votes. The other winning Council candidates were DiPasquale, Perna, Bruno, Pirone, and Bonacci; the Township Council consisted of four Republicans and two Democrats. Cohen, DiPasquale, Perna, Bruno, and Ronner were sitting Township Committee members in 2006; Battaglia sat on the Committee in the 1990s. Ronner was the only Township Committee incumbent who was unseated.

On January 1, 2007, the Township Council elected Elaine Perna Council President, after Mayor Cohen broke a tie vote and defeated Louis DiPasquale's candidacy for the presidency. The Council then elected Joseph Bruno Council vice president. The Council president has no authority other than to chair Council meetings in the mayor's absence; the Council vice president chairs meetings in the absence of both the mayor and the Council president. If all three officials are absent, then the remaining Council members must choose a temporary presiding officer.

The Berkeley Heights Municipal Building is located at 29 Park Avenue.

Berkeley Heights is located in the 7th Congressional District[63] and is part of New Jersey's 21st state legislative district.[9][64][65] 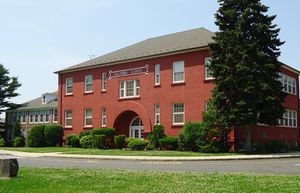 The district's high school serves public school students of Berkeley Heights, along with those from neighboring Borough of Mountainside who are educated at the high school as part of a sending/receiving relationship with the Mountainside School District.[108] Governor Livingston also provides programs for deaf, hard of hearing and cognitively-impaired students who are enrolled from all over north-central New Jersey. 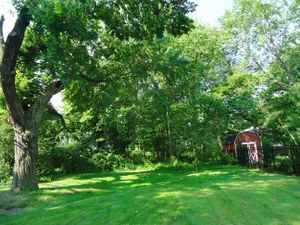 Governor Livingston was the 36th-ranked public high school in New Jersey out of 328 schools statewide in New Jersey Monthly magazine's September 2012 cover story on the state's "Top Public High Schools", after being ranked 24th in 2010 out of 322 schools listed.[109]

There are no primary or secondary private schools in Berkeley Heights.

Berkeley Heights is served by Interstate 78, which runs from the Holland Tunnel to the Pennsylvania state line. 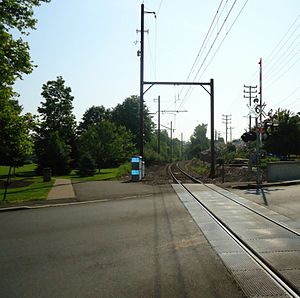 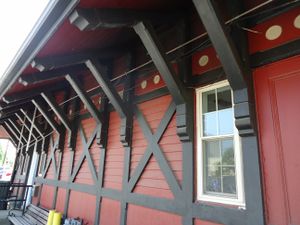 Freight rail transportation had been provided by Norfolk Southern via off-peak use of New Jersey Transit's Gladstone Branch line until a final run on November 7, 2008, after 126 years of service. The Berkeley Heights plant of Reheis Chemical located on Snyder Avenue was the last freight customer on the Gladstone Branch, receiving shipments of hydrochloric acid.[113]

The Summit Medical Group, located on Mountain Avenue, is the main medical facility in Berkeley Heights.[114] 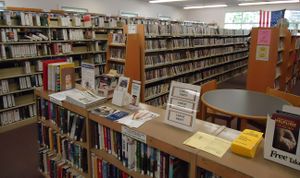 Interior view of the library

The Berkeley Heights Public Library at 290 Plainfield Avenue,[115] next to the Church of the Little Flower and across from the Columbia Middle School, is a member of the Infolink region of libraries, the Morris Union Federation (MUF) and the Middlesex Union Reciprocal Agreement Libraries (MURAL).[116] The library catalog is available online.

Police station and parking lot next to the train station

The Berkeley Heights Volunteer Rescue Squad, founded in 1942, is located at the corner of Snyder Avenue and Locust Avenue. The closest trauma centers are Morristown Medical Center (in Morristown) and University Hospital in Newark. The closest hospital emergency room is Overlook Hospital in Summit. The all-volunteer Rescue Squad provides emergency medical services to the township seven days per week. As of the summer of 2011 the squad had over 50 members including more than 35 certified EMTs. The squad also enlists college students and has an active high school cadet program. In 2010 the rescue squad responded to nearly 600 calls for assistance.[118]

The Berkeley Heights Fire Department is a volunteer fire department with 40 members that operate out of a fire station located at 411 Hamilton Avenue, across from the intersection of Roosevelt Avenue. The department has three engines, one ladder truck, a rescue truck with the Jaws of Life, an air truck, and several support vehicles. In 2010 the department responded to 665 calls.[119]

People who were born in, residents of, or otherwise closely associated with Berkeley Heights include: