Bernabò or Barnabò Visconti (1323 – 19 December 1385) was an Italian soldier and statesman who was Lord of Milan.

He was born in Milan, the son of Stefano Visconti and Valentina Doria. From 1346 to 1349 he lived in exile, until he was called back by his uncle Giovanni Visconti. On 27 September 1350 Bernabò married Beatrice Regina della Scala, daughter of Mastino II, Lord of Verona and Taddea da Carrara, and forged both a political and cultural alliance between the two cities. His intrigues and ambitions kept him at war almost continuously with Pope Urban V, the Florentines, Venice and Savoy. In 1354, at the death of Giovanni, he inherited the power of Milan, together with his brothers Matteo and Galeazzo. Bernabò received the eastern lands (Bergamo, Brescia, Cremona and Crema), that bordered the Veronese territories. Milan itself was to be ruled in turn by the three brothers. The vicious Matteo was murdered in 1355 at the order of his brothers, who divided his inheritance between them.

In 1356, after having offended the emperor, he pushed back a first attack upon Milan by the imperial vicar Markward von Randeck, imprisoning him. In 1360 he was declared heretic by Innocent VI at Avignon and condemned by Emperor Charles IV. The ensuing conflict ended with a dismaying defeat at San Ruffillo against the imperial troops under Galeotto I Malatesta (29 July 1361). In 1362, after the death of his sister's husband, Ugolino Gonzaga, caused him to attack also Mantua. Warring on several different fronts, in December of that year he sued for peace with the new pope, Urban V, through the mediation of King John II of France. However, because Barnabò neglected to return the papal city of Bologna and to present himself at Avignon, on 4 March 1363 he was excommunicated once more,[1] together with his children, one of whom, Ambrogio, was captured by the Papal commander Gil de Albornoz. With the peace signed on 13 March 1364, Visconti left the occupied Papal lands, in exchange for the raising of the ban upon a payment of 500,000 florins.

In spring 1368 Visconti allied with Cansignorio della Scala of Verona, and attacked Mantua, still ruled by Ugolino Gonzaga. The situation was settled later in the year through an agreement between him and emperor. Two years later he besieged Reggio, which he managed to acquire from Gonzaga in 1371. The following war against the Este of Modena and Ferrara raised again Papal enmity against the Milanese, now on the part of Gregory XI. In 1370, he ordered the construction of the Trezzo Bridge, then the largest single-arch bridge in the world.

In 1373, the pope sent two papal delegates to serve Bernabò and Galeazzo their excommunication papers (consisting of a parchment bearing a leaden seal rolled in a silken cord). Bernabò, infuriated, placed the two papal delegates under arrest and refused their release until they had eaten the parchment, seal, and silken cord which they had served him.[2] He managed to resist, despite also the outbreak of a plague in Milan, whose consequences he suppressed with frantic energy.[3] In 1378 he allied with the Republic of Venice in its War of Chioggia against Genoa. His troops were however defeated in September 1379 in the Val Bisagno.

Bernabò, whose despotism and taxes had enraged the Milanese — he is featured among the exempla of tyrants as victims of Fortune in Chaucer's[4] Monk's Tale as "god of delit and scourge of Lumbardye" — was deposed by his nephew Gian Galeazzo Visconti in 1385. Imprisoned in the castle of Trezzo, he was poisoned in December of that year.[citation needed]

Bonino da Campione sculpted the equestrian statue of Bernabò Visconti for the church of San Giovanni in Conca around 1363. Its positioning near the church's main altar was regarded as highly problematic by contemporaries and it was commented on by poet and intellectual Petrarch among others. The equestrian statue was reused – with changes and additions carried out by the same Bonino in 1385-86 – as Bernabò's funerary monument in the same church. It is now preserved in the Castello Sforzesco in Milan.[5]An erratic small-size male head in marble now in the storerooms of Castello Sforzesco has recently been rediscovered and tentatively identified as a portrait of the elderly Bernabò. This work too has been attributed to Bonino da Campione.[6] 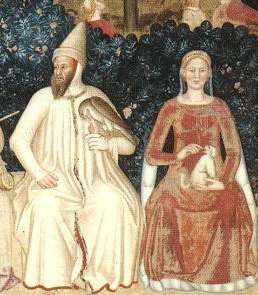 Bernabò and his wife, Beatrice

Bernabò was an ally of Stephen II, Duke of Bavaria: three of his daughters were married with Stephen's descendants. He had at least 15 legitimate children with his wife Beatrice Regina della Scala:[7]

His illegitimate offspring by Donnina del Porri, legitimated in a ceremony after the death of his wife in 1384,[7][8] were as follows:

In addition, Bernabò had other illegitimate offspring by other mistresses:[7]